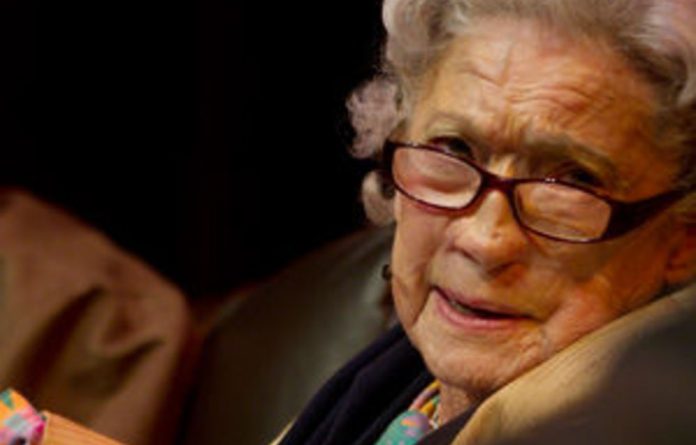 South Africa’s most powerful struggle memoirs celebrate the personal as much as the political. That was the message of the M&G Literary Festival’s “Memory Is the Weapon” session, chaired by Mail & Guardian editor Nic Dawes, with a trio of South African veterans of the struggle speaking from the heart about falling in love and the battle for freedom.

There were moments of humour, too — notably when panellist Ronnie Kasrils recalled ruining an expensive table belonging to fellow panellist Rica Hodgson as he practised his bomb-making skills.

Kasrils and 91-year-old Hodgson were joined by Hugh Lewin, whose latest book, Stones against the Mirror (Umuzi), explores friendship and betrayal, as the former political prisoner traces his 40-year journey towards reconciliation and healing. Kasrils hailed Lewin’s book as a “trailblazer” because of its “deeply personal” approach, which, he said, pushed the boundaries of politically inspired memoirs.

Hodgson, author of Foot Soldier for Freedom (Picador Africa) — an account of nearly 70 years in the struggle — explained why she had come to writing so late in life. The realisation that very few “ordinary women” had told their stories prompted her to take up her pen, she said. She had hoped her example would inspire other women to write their own memoirs, she said. She felt personal stories could bring history alive for the younger generation of South Africans who never experienced apartheid and who “can’t fathom” what it was all about.

Revolutionary love story
Founding member of Umkhonto weSizwe and former minister of intelligence Kasrils disclosed his softer side as he spoke about his late wife, Eleanor — the inspiration for his latest memoir, The Unlikely Secret Agent (Jacana).

Kasrils said that in the process of writing his own “love story”, he became aware that the “revolution itself was built on the principle of love: for South Africa and its people”. He quoted a little-known comment from ANC leader Oliver Tambo, made when he was living in exile in Zambia. When asked what message he wanted to send to people back home, Tambo replied simply: “Tell them that I love them.”

Kasrils, who often looked as if he wanted to escape the confines of his leather couch, challenged the notion that apartheid-era memoirs are merely the work of “old farts”.

The [Julius] Malema generation, he said, did not understand the central principle of South Africa’s freedom struggle: “The commitment to the greater cause of opposing tyranny and oppression” without seeking personal gain.

It was “imperative”, he said, that young politicians prioritised “the people, not themselves”.

Nuanced views
Both Kasrils and Hodgson were scornful of the South African Jewish Board of Deputies’ recent “apology” to Jews who had participated in the struggle and who had been “let down” by the Jewish community. “Why doesn’t the board apologise to all South Africans for the way they were treated during apartheid?” asked Hodgson.

Lewin agreed and urged South African writers to move beyond “over-simplified” definitions of race. “We really don’t need this kind of approach anymore,” he said.

Reading extracts from his book, Lewin also highlighted the complexity of writing about the struggle in a non-judgmental, nuanced way. He was not, he said, an investigative journalist or a historian. So his memoir was not about “archival truth”. Instead, it was “an attempt to understand” and to “shatter the mirror” of self-deception.

But beware, Lewin warned: the pieces of the mirror are sharp and if you pick them up “they may make you bleed”.

For more coverage of the M&G LIterary Festival, see the special report.

Gee-gee gambling on the Sabbath