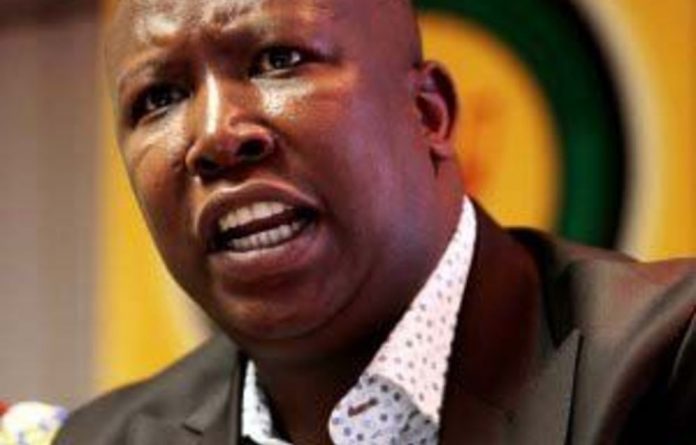 The ANC says it is “appalled” by the hate speech judgment against youth league leader Julius Malema, saying the ruling failed to take into account “the history of South Africa”.

‘People have experienced far worse in the past,” ANC spokesperson Keith Khoza told the Mail & Guardian. ‘The issue is not about Malema. These songs were sung before he came along.”

Malema was found guilty of hate speech in the South Gauteng High Court, sitting as the Equality Court, by Judge Colin Lamont on Monday morning.

Lamont ruled that the words Dubula I’bhunu — or “shoot the boer” — might have been part of a legitimate struggle song in the past, but in the way Malema sang the chant, and the way they had been portrayed through the media, they had been transformed into hate speech.

‘The ANC is not happy. We will study full judgment to understand the implications and decide on the next step to take, having looked at the options”, he said.

The ANC later confirmed that it would appeal the decision.

Lamont read his judgment to a packed court room full of media, AfriForum supporters and a handful of ANC members on Monday morning — but Malema was conspicuous by his absence.

Senior ANC officials who had supported Malema during the trial in April were absent from court on Monday.

ANC secretary general Gwede Mantashe, Deputy Minister of Science and Technology Derek Hanekom and Minister in the Presidency Collins Chabane, who all testified in the trial in Malema’s defence, were not present for the judgment.

But league spokesperson Floyd Shivambu was in court, as was Ronald Lamola and ANC Secretary General Sindiso Magaqa. All three are facing disciplinary charges for sowing disrepute in the ANC and for making comments in support of regime change in Botswana.

Civil rights group AfriForum opened a civil case at the Equality Court after Malema sang the song at several youth league rallies in March this year.

The group argued that “Malema singing Dubulu i’Bhunu suggested white Afrikaners should be shunned or at worst killed,” said Lamont in his ruling.

He said the reference to “boer” could be loosely translated as “referring to the Afrikaaner community”.

Lamont said certain words in the song “dehumanised the Afrikaner community, referring to them as dogs”.

“Dehumanising the enemy was one of the seven steps to genocide,” he pointed out.

“Hate speech is a direct invasion of dignity,” Lamont ruled, effectively balancing the right to dignity with the right to freedom of speech.

“There is inevitably tension between freedom of speech and hate speech,” Lamont admitted.

No evidence of actual violence
But Lamont made it clear that there he saw no evidence that the song had led to specific farm murders and violence against Afrikaners in the months when it was sung by the youth league leader.

The judge ruled that Malema understood the double meaning of “Dubula i’bhunu“, which had changed from a struggle song against apartheid to one that also promoted violence against the Afrikaans community.

Malema and the ANC had argued in court this year that the song was a struggle song that referred to apartheid and did not exhort its listeners to kill farmers or Afrikaans people.

Lamont disagreed, saying the struggle song had been innocuous before it made headlines in the media but “would never be innocuous again”.

Once the media translated the words as “shoot the boer”, the audience understood them as promoting violence against the white Afrikaans community, he added.

He said Malema was well aware of how the song was understood when he sang the song at youth league rallies, and knew how it would be reported on in the media.

Decoding the song
Lamont also said it mattered how “audience decoded words and not just how they were uttered”.

“It is reasonable that words mean different things to people” said Lamont.

The judge also made reference to the video recording of Malema singing the song that had been used as evidence in court. In the video, Malema made gun gestures with his hand while singing.

Lamont said recordings that he had of Minister in the Presidency Collins Chabane singing the song sounded pleasant, but Malema sang it differently — “as a chant with violent gestures”.

Deeply divided country
Lamont spent over an hour reading his judgment, starting with how “boers” came to live in South Africa and used apartheid to consolidate their power as a minority group.

He said that the evidence before him showed South Africa was a deeply divided society and would “remain so for some time”.

But he said the Constitution and ubuntu-based law could be used to make judgments to reconcile society.

AfriForum’s deputy chief executive officer Ernst Roets told the Mail and Guardian he was pleased that Lamont had taken “deliberate effort to explain why he came to the conclusion he did and why certain groups feel alienated by the songs”.

Roets said AfriForum was not worried that the judgment would increase Malema’s popularity as his supporters rallied around him. He said the group felt strongly “that it did the right thing by taking the civil case to the Equality Court”.

But he added that AfriForum had tried to resolve the issue “with dialogue” but when it failed “it had no option but to go to court.”

Only a handful of Malema supporters stood outside the court to support him today, where there was a heavy police presence.

They refused to comment on the ruling to the M&G, saying instead: “Go, for the sake of your health, go!”

Meanwhile…
Four matriculants from the Wits Tutorial College waited outside the high court for Malema.

Grade 12 pupil Khensani Mabaso said she was disappointed Malema had not appeared in court and was waiting to ask him to sponsor her matric dance fees.

Her friend Precious Marandela said she “would support Malema through thick and thin and would even marry him”.