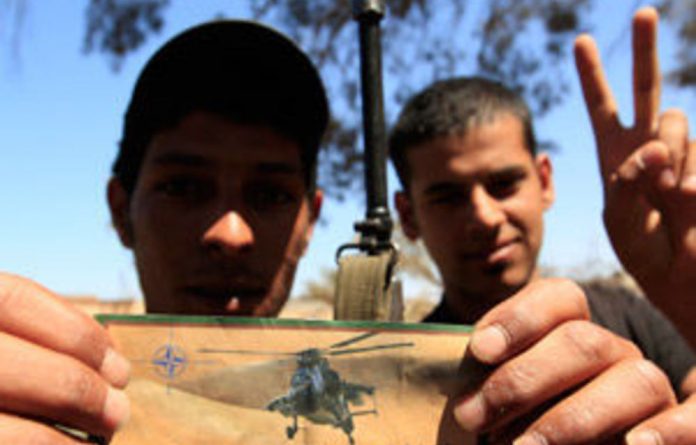 Libyan interim government forces licked their wounds on Saturday after a failed assault on the town of Bani Walid, and a spokesperson for Muammar Gaddafi accused Nato of killing 354 people in overnight air strikes on the city of Sirte.

Moussa Ibrahim, the deposed leader’s spokesperson, contacted Reuters by satellite telephone to say Gaddafi was still in Libya, leading the “resistance” against his foes.

He said Nato air strikes on Sirte, Gaddafi’s birthplace, had hit a residential building and a hotel — killing 354 people.

“We are aware of these allegations,” Colonel Roland Lavoie, spokesperson for the Western military alliance, said in Brussels. “It is not the first time such allegations have been made. Most often, they are revealed to be unfounded or inconclusive.”

The death toll could not be verified as communications with the coastal city have been scant since Tripoli fell on August 23.

More than 700 people were wounded in air strikes in Sirte on Friday, Ibrahim said, and 89 were missing.

“In the last 17 days more than 2 000 residents of the city of Sirte were killed in Nato air strikes,” he added.

Ibrahim, who put his own location as near Sirte, said Gaddafi remained in the country and was confident of victory.

“We will be able to continue this fight and we have enough arms for months and months to come,” he said.

Failed talks
Gaddafi loyalists have repelled assaults by forces of the ruling National Transitional Council (NTC) on Sirte and Bani Walid, launched after failed negotiations for their surrender.

Grumbles replaced gunfire outside Bani Walid as NTC fighters debated the failure of the previous day’s attack and the town’s defenders lobbed mortar bombs at them.

“It was difficult,” admitted one fighter, surprised he had survived sniper fire and rockets when his brigade raced into Bani Walid on Friday. “We’ll do it differently next time.”

After hours of fighting, the NTC men had retreated almost as fast as they had poured into the town, in a serious setback to Libya’s new rulers, trying to exert their grip across the country and seize remaining Gaddafi-held towns.

On Saturday, NTC fighters blamed traitors, snipers and oil poured by Bani Walid’s defenders down steep streets leading to the town centre for their defeat.

Trapped
Others blamed a lack of troops, coordination and discipline among the different attacking brigades.

One fighter, Nuraldin Zardi, told Reuters his brigade had missed the order to retreat and had found itself trapped and isolated inside Bani Walid hours after their comrades had fled.

“We will not rely on our commanders any more,” he said, reflecting growing dissent in NTC ranks. “We will do everything ourselves and take our own decisions.”

The first of what NTC fighters said would be an extra 1 000 men from Tripoli and elsewhere began arriving near Bani Walid.

A Reuters reporter on the western highway leading to Sirte said he could hear gunfire and shelling as NTC forces advanced.

Holding out
Gaddafi loyalists were holding out in Sirte on Libya’s central Mediterranean coast — a day after their opponents captured the city’s airport on its outskirts.

“Gaddafi’s troops are between the houses, there are a lot of snipers on the roofs,” NTC fighter Mabrook Salem said.

Despite their frustrations, the council is getting on with the business of government, seeking to impose order on various irregular armed forces and revive the oil-based economy.

Those efforts received a lift on Friday when the United Nations (UN) Security Council eased sanctions, including those on Libya’s national oil company and central bank, and voted to establish a UN mission in the country.

Hang up arms
The latest foreign visitor was Turkish Prime Minister Tayyip Erdogan, who hailed the fate of Gaddafi as an example to Turkey’s neighbour Syria whose autocratic president has resorted to tanks and troops to try to crush popular unrest.

Erdogan also called on the people of Sirte to give up the fight and make peace.

Contact has not been possible with Gaddafi loyalists in Sirte, Bani Walid or in Sabha, deep in Libya’s southern desert where several senior Gaddafi aides have been lately.

Gaddafi (69) remains at large and commands loyalty from at least hundreds of armed men, concentrated in areas from Sirte through Bani Walid and Sabha, creating a corridor in the vast empty spaces of the desert through which members of Gaddafi’s family and senior aides have reached Algeria and Niger.

Niger’s justice minister said on Friday it would not send one of Gaddafi’s sons, Saadi, back to Libya, saying he could not get a fair trial there and risked the death penalty.

Marou Amadou indicated that it would be different if Gaddafi, his son Saif al-Islam or intelligence chief Abdullah al-Senussi showed up. All three are wanted by the International Criminal Court (ICC) for alleged crimes against humanity.

“If that person was, however, wanted by an independent tribunal or a state that has universal competence to try them, then Niger will do its duty,” Amadou told a news conference. — Reuters