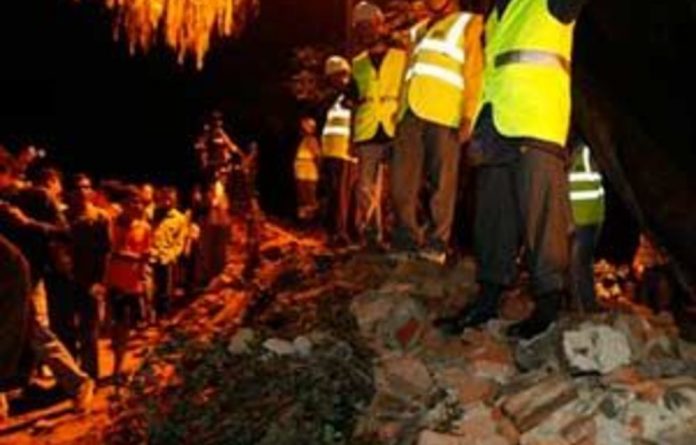 A powerful 6.9-magnitude earthquake rocked north eastern India on Sunday, killing as many as eight people including five who died in tremors that rocked neighbouring Nepal.

The United States Geological Survey said the quake hit the small, landlocked Himalayan state of Sikkim — which borders Nepal, Bhutan and Tibet — at around 6:10pm.

The epicentre was just over 60km north west of the state capital Gangtok which was plunged into darkness by a power cut of about 20 seconds after the quake.

“There is no electricity. Everybody is out on the road,” Gangtok resident CK Dahal told the CNN-IBN television news channel.

“We all ran out our houses, some even jumped out of their windows. You can see some buildings that have developed cracks,” Dahal added.

Sikkim Chief Secretary Karma Gyatso told the channel, “It was a massive earthquake. We have alerted the armed forces and the paramilitary”.

Widespread tremors
Powerful tremors were felt across a wide region including Nepal, Bhutan, Bangladesh and the eastern Indian cities of Guwahati and Kolkata, as well as the Indian capital New Delhi.

In Nepal, police said that five people had been killed including three when a wall collapsed at the British Embassy compound in the capital Kathmandu, 270km west of the epicentre.

A motorcyclist and his eight-year-old daughter who was riding with him were struck and killed by the collapsing wall, Singh said, while another person whose identity was unknown also died at the embassy.

There were reports of isolated building collapses in towns outside Gangtok while residents of the city said large cracks had appeared in some buildings.

Local journalist Prakash Adhikary cited Sikkim police officials as saying that three people were killed in and around Gangtok.

One died and 25 were injured when an apartment building collapsed in the town of Rangpo, 40km away, Adhikary told AFP.

Another man was killed in a mudslide on the outskirts of Gangtok and a young child died after being hit by falling debris.

Collapsed buildings
Manish Sharma, a doctor attending a conference in Gangtok, told the NDTV news channel that guests in his hotel had all run for the doors as soon as the first tremors were felt.

“I am standing in front of the legislative assembly of Gangtok and I can see one of the outer buildings … the upper side is in two parts,” Sharma said.

“I can see light coming out of that particular portion. It has not collapsed but it is in two parts. One part has moved aside,” he said.

“The police are trying to calm people down.”

“The teams will land there in the night. Indian air force aircraft are also being sent with relief supplies,” Seth said.

Strong tremors were felt in Guwahati, the main city in neighbouring Assam state, some 600km away, sending panicked residents running into the streets.

In Kathmandu, traffic came to a standstill as hotels and bars were evacuated.

Hundreds of anxious tourists and residents waited for news in car parks and on the streets as the seasonal monsoon rain lashed down.

In Bhutan, buildings in the capital Thimphu were also rocked.

“Our wooden house is safe. Jars fell in kitchen, books fell from shelf,” Thimphu resident Aby Tharakan, a media consultant, said in a message posted on the microblogging website Twitter.

India’s seven north eastern states, joined to the rest of the country by a narrow sliver of land, are located in an area of frequent seismic activity. — AFP