Clashes escalate in Yemen after crackdown 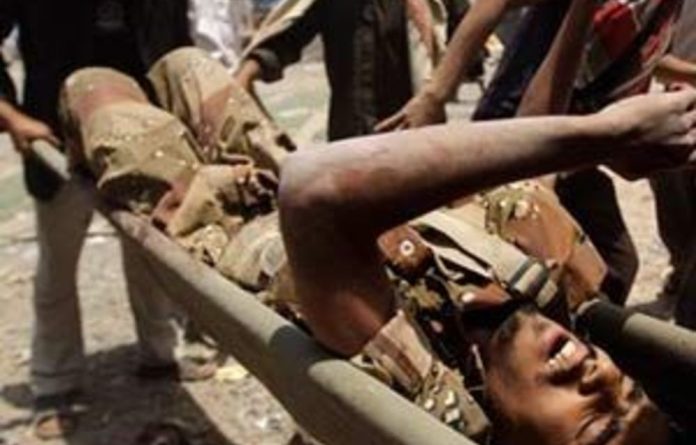 Soldiers opposed to President Ali Abdullah Saleh exchanged heavy fire with government troops in the centre of Sanaa on Monday, as violence spiralled during the deadliest crackdown on pro-democracy demonstrations since they began eight months ago.

Yemeni security forces, including snipers, killed 28 people in Yemen’s capital on Monday, raising the death toll to 54 over two days.

“Help me, oh my God look at this slaughter!” said a man carrying the bloodied body of his small child, killed by gunfire. “We were just in the car…I stepped out to get some food and left my two boys in the car. I heard the older one scream. My little one was shot straight through the head.”

Witnesses said government forces were trading heavy rifle and missile fire with troops loyal to General Ali Mohsen, who defected to the protesters some months ago.

An escalation from clashes around protests into outright military confrontation in Sanaa has been a major concern for many in Yemen, who fear this will make it even harder to reach a political settlement under which Saleh would hand over power.

“This is only going to get worse,” one man shouted as he fled a new protest camp, staked out by protesters on Sunday night and attacked by snipers on Monday. Troops loyal to Mohsen jumped in trucks and sped towards the heavy cracks of gunfire.

“We will come back to protest later. I am afraid, but this is worth dying for,” the man said. He was among hundreds rushing back to the relative safety of protesters’ original sit-in area, dubbed Change Square, where they have camped out for eight months to demand an end to Saleh’s 33-year rule.

Diplomats and Yemeni politicians scrambled on Monday to speed up a long-stalled transition plan under which Saleh, who is recovering in neighbouring Saudi Arabia from a June assassination attempt, would hand over power

A source in Yemen’s political opposition said they were meeting with government officials and diplomats to try and push through a deal. United Nations mediator Jamal bin Omar and Gulf Cooperation Council Secretary General Abdbullatif al-Zayani arrived in Sanaa on Monday and were expected to join the talks.

Zayani was expected to push for a signing of a Gulf-brokered transition plan which Saleh thrice backed out of at the last minute. “There’s a possibility of trying to push through the Gulf plan for signing this week,” he said.

Saleh met with Saudi Arabia’s Kind Abdullah on Monday, the Saudi state news agency reported. It said only that the Yemeni president had expressed his thanks for the king’s hospitality.

Some killed by rocket-propelled grenades
Medics said 187 protesters were wounded on Monday after a dramatic escalation in violence which began with a huge anti-government march on Sunday. At least 400 protesters and police have died since the revolt began eight months ago.

Protesters had been planning to ratchet up demonstrations this week. They said they expected a spike in bloodshed as they pushed their marches into areas surrounded by government troops in a bid to re-energise a languishing protest movement.

“We have known that this regime would kill its citizens,” said Manea al-Mattari, from the Organisation Council for the Youth Revolution. “But we know we have to do this, let our blood spill so the world notices how much Yemenis want their freedom.”

Government forces closed down the southern entrance to Sanaa in the evening, a witness said, a move likely aimed at stopping armed tribesmen who back the opposition from entering the city.

The violence on Monday began when government troops fired at an area seized by protesters on Sunday night to force them back to Change Square. A Reuters reporter saw snipers shooting from rooftops into the throng of demonstrators. Some of the deaths appeared to have been caused by rocket-propelled grenades.

Injured people were whisked on motorcycles to a mosque transformed into a makeshift hospital, where ambulances were arriving with shattered windows and pockmarked with bullet holes. Copies of the Qu’ran were laid on the chests of the dead.

In an earlier crackdown in mid-March, 52 people were killed.

As shelling and gunfire continued in Sanaa, pro-opposition tribesmen said clashes had also surged in Arhab, a tribal area north of the capital, after they attacked a military base there.

Further south, militants suspected of links to al-Qaeda clashed with the army in the Abyan provincial capital of Zinjibar, just over a week after Yemen declared its troops had “liberated” the city from Islamist fighters.

Six militants were killed and three soldiers wounded in the fighting in the east of Zinjibar, a security official and residents said on Monday.

“There is no new initiative to cool things off and the other political players doubt that Saleh will abide by any terms that are set,” he said.

Manea al-Mattari, of the youth council, said many protesters would continue to escalate protests even if a Gulf deal was signed: “We don’t accept this deal, we’ll keep escalating. The opposition can accept this anyways after what’s happened.”

Protester killings to be probed
In Geneva on Monday, Yemeni Foreign Minister Abubakr Abdullah Al-Qirbi said Sunday’s bloodshed would be investigated and perpetrators would be prosecuted.

In a speech to the UN Human Rights Council, he said: “The government of Yemen expresses its sorrow and condemnation for all acts of violence and bloodshed as those that happened yesterday in Sanaa. The government will investigate and hold accountable all those in charge of these acts.”

Sanaa for months has been split between Mohsen’s breakaway troops and Saleh loyalist forces in a maze of checkpoints, roadblocks and armoured vehicles.

Protesters on Monday managed to extend the territory of their camp by around one kilometre after hundreds slept there overnight. Mohsen’s troops entered the area and were fortifying it with sandbags.

The new staked-out area brought protesters and troops backing them within 500 metres (1,650 feet) of the office of Ahmed Ali Saleh, the president’s son and head of the Republican Guard units loyal to the government.

“I will go back out once the doctors check the wound,” said Dhuyazen al-Shiah (23) whose eye was bandaged after bullet fragments hit his face in Sunday’s clashes.

“I do this because I was tired of living with no dignity. I worked as a smuggler through Saudi Arabia because I couldn’t find a job here. I am committed to this now. I’ll keep going and either succeed or I’ll die.” — Reuters