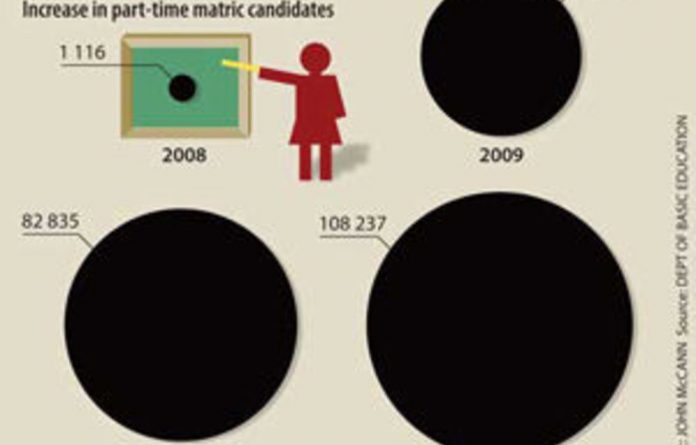 With nearly 50 000 fewer full-time candidates enrolled to write matric this year than in 2010, Parliament wants the department of basic education to explain the sudden spike in part-time candidates writing the final exam.

Parliament has also asked the department to investigate the long-suspected practice in many schools of holding borderline grade 11 pupils back from promotion to grade 12 to improve matric pass rates.

With matric finals about a month away, Parliament’s concern has again raised the suspicion of “engineered” matric results. Only the results of full-time candidates are used to calculate the overall matric pass rate.

ANC MP Helen Malgas, chairperson of Parliament’s basic education portfolio committee, said at the committee’s meeting last week that its request followed the department’s failure to explain fully the “phenomenon” of the increase in part-time candidates.

“We first noted and raised this phenomenon early this year when we considered the department of basic education’s briefing on the 2010 matriculation results,” Malgas told the Mail & Guardian.

This year only 512 029 full-time pupils are enrolled to write matric — a decrease of 47 137 in the number enrolled by this time last year. By then, 559 166 full-timers had signed up, although only 539543 took their exams. Malgas said the committee’s overall concern was the drop in full-time candidates. It has given the department of basic education 14 days in which to report back.

Part-time enrolments
The department told the committee last week that the increase in part-time enrolments in a given year was explained by the number of full-timers who failed the preceding year and wanted to rewrite, Malgas said.

It also said the change in the admission age for school from six to seven in 2000 had resulted in a smaller grade one cohort that year and in turn fewer full-time enrolments this year.

But the committee felt these factors did not fully explain the trends, Malgas said. It believed there were other “underlying factors” which it had asked the department to investigate.

Martin Prew, director of the Centre for Education Policy Development, told the M&G it should be a “serious concern” that more than 108000 exam candidates come from outside the schooling system.

He also doubted that the majority of these candidates were really out of school and claimed that there were “concerted efforts” at both school and provincial levels to “engineer” matric results.

“As soon as you repeat any subjects in matric, your chances of doing well diminish,” he said.

Ruksana Osman, head of the Wits School of Education, said the increase in part-time candidates constituted a “parallel stream” to formal education that the department of basic education had to recognise and provide “systematic support” for.

The basic education department’s chief director of national examinations and assessment, Rufus Poliah, said the department would deliver its report to the portfolio committee on September 27.

He told the M&G the report would show the committee that “there’s nothing untoward and concerning” in the upsurge of part-timers. “The numbers are acceptable because of failures in preceding years,” said Poliah. “We expect them to increase over the next few years [because] more learners will come back to write.”

He said it was “speculation” to say the part-time candidates are largely poorly performing pupils. The department is “confident it’s not learners that were in school full-time and now registered as part-time”.

The department liaised with provincial education departments to ensure that schools did not register weak candidates as part-timers, Poliah said. “It’s not an advantage to learners to be registered as part-time candidates for exams,” he added.