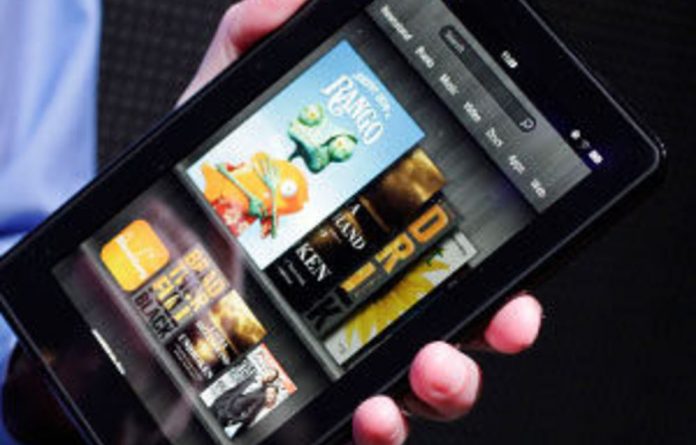 Amazon.com took the wraps off its long-awaited “Kindle Fire” on Wednesday, tacking on a mass market-friendly $199 price tag that poses a serious threat to the dominance of Apple’s two-year-old iPad.

The eagerly anticipated gadget, while lacking many of the high-tech bells and whistles common on tablets from cameras to a 3G wireless connection, may sound the death knell for a raft of devices based on Google’s Android. The software powers tablets made by Samsung, Motorola, Asustek, HTC and LG Electronics.

Dotcom-entrepreneur and billionaire-CEO Jeff Bezos unveiled to a packed audience the gadget he hopes will wed Amazon’s books, movies, music and other content with cloud or internet-based storage and web browsing.

“People have been waiting for a tablet for 200 bucks for a long time and this is the best one I’ve seen so far,” Tim Stevens, editor-in-chief of gadget review website Engadget, told Reuters.

The Kindle Fire tablet has a 7-inch screen, free data storage over the internet and a new browser called Amazon Silk. Amazon expects shipments to start on November 15 — hitting store shelves at Best Buy and other chains just in time for the peak holiday shopping season.

By pricing the Fire at less than half the iPad — yet stripping out costlier components and features — the internet retailer hopes to get the device into millions of consumers’ hands, who in turn will buy Amazon content.

One key differentiator that might help the Fire stand out during the cut-throat holidays is Amazon’s “EC2” cloud computing service, which supports internet browsing and helps speed loading of websites. That was not available on rival tablets, Stevens noted.

‘Blood bath’ pricing war
“Expect a blood bath as pricing will have to get extremely aggressive,” said Mark Gerber, an analyst at Detwiler Fenton & Co. He expects Amazon to sell at least three million Kindle Fires this holiday season, taking the number two spot in the tablet market.

The Fire was unveiled alongside several rock-bottom-priced versions of the basic Kindle reader, with the lowest at $79 — a clear challenge to Barnes & Noble’s Nook that will surely force the ailing bookstore chain to try and match.

“These are premium products at non-premium prices,” Bezos said. “We are going to sell millions of these.”

Analysts had expected Amazon’s tablet to be priced at about $250, roughly half the price of Apple’s dominant iPad, which starts at $499. The Nook Color e-reader costs $249.

The Web retailer might be angling for a lower-end slice of the market that Apple — which maintains a careful grip over its higher-end branding and margins — has traditionally steered clear of.

Supply concerns
Bezos said Amazon is making “millions” of the tablets, without being more specific. However, he urged customers to pre-order the device.

When the original Kindle e-reader came out in 2007, it quickly sold out.

Colin Sebastian, an analyst at RW Baird, kept his Amazon tablet sales forecasts the same on Wednesday on concern about potential supply issues. He expects two million to three million units to be sold this year and four to six million next year.

“While we think the Kindle Fire could easily be the most successful Android-based tablet to date, the November 15 launch date, and the possibility of issues with ramping production — Apple encountered significant production issues with the iPad 2 — are the key reasons we are maintaining our current tablet estimates.”

Crowded market
Breaking into a crowded tablet market will be difficult. Companies from Hewlett Packard, Motorola, Samsung and Research in Motion have launched tablets, but none has taken a big bite out of Apple’s lead.

Apple dominates the North American tablet market, with 80% of the 7.5-million units shipped during the second quarter of 2011, according to Strategy Analytics.

Bezos took a jab at its larger rival during the New York press conference on Wednesday, noting that the Fire needs no wires for syncing. An image of a white USB cord appeared on the screen behind him, prompting laughter from the crowd.

Bezos didn’t mention Apple but the picture of the cord resembled those commonly used to connect iPhones and iPads to computers.

Still, Michael Yoshikami, who oversees $1-billion at YCMNET Advisors, discounted any serious hit to Apple — for now — because of Apple’s similarly rich library of content.

But he thought Apple may need to start offering some sort of subscription-based video streaming service — iTunes is download primarily — to respond. Rivals without their own content or services to support their devices, such as Samsung, are most exposed, he added.

“HP’s decision to get out of tablets is actually looking fairly bright,” he told Reuters.

Having its own tablet is important for Amazon because the company has amassed a mountain of digital goods and services that could be sold through such a device.

Amazon recently redesigned its main shopping website to make it easier to navigate for mobile users.

“Getting this device into the hands of customers means Amazon can expand their e-commerce footprint — this is a strategic focus for the company,” said Eric Best, an Amazon veteran who now runs online commerce company Mercent.

“Every Kindle Fire user, by virtue of the better browser and richer operating system, has the potential to become a more frequent Amazon shopper.”

Meanwhile, competition at the high end of the market is heating up. Motorola on Wednesday announced it will offer 4G-LTE upgrades for Motorola Xoom users on Verizon Wireless, improving loading speeds. – Reuters

Apple acolytes and fans of excess will access its Xs soon

Goggle the asp that fits with your Leninist

The market for transforming tablets is heating up