Boks battle to victory over Samoa 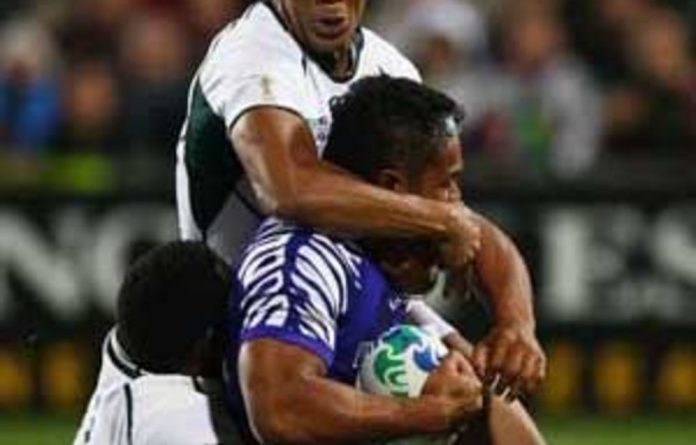 South Africa qualified for the quarterfinals of the Rugby World Cup on Friday after a scrappy 13-5 victory over Samoa in North Shore City.

It was a masterful display by the Springboks that set the tone in the first half but Samoa fought back hard in the second to make it a truly nail-biting encounter in the final 20 minutes.

The Springboks finished the first 40 minutes 13-0 up after a try by Bryan Habana in the 8th minute, five points from the boot of Morné Steyn and a mammoth penalty from Frans Steyn.

But it was a vastly different tale after the break as Samoa managed to take the game to the Springboks, who were lucky only to concede George Stowers’s unconverted try in the 51st minute.

The greatest action of the whole encounter came in the final 10 minutes after Samoa’s fullback Paul Williams was sent off after a scuffle with Heinrich Brussow — the first red card of the tournament.

John Smit, second-half substitute for Bismarck du Plessis, was then bizarrely sin-binned a minute later after referee Nigel Owens adjudged him to have knocked the ball down in a pass interception.

What followed was true brute force meted out by both teams as they powered into each other’s territory in the hopes of finding the tryline.

But it was not to be for Samoa as the Springboks held on for dear life and assured they finish on top of Pool D on 18 points.

Samoa have now officially been knocked out of the World Cup after a valiant display against not only the Springboks but also Wales earlier in the competition.

As things stand, South Africa will play Australia in the quarterfinals provided the Wallabies manage to see off Russia and Ireland stave off Italy this weekend in their final Pool C games.

The fact that Peter de Villiers’s men missed 27 tackles will certainly have some alarm bells ringing among the coaching staff, as the Australian backline might not be so forgiving as the Samoans.

Nonetheless the game offered some impressive displays by several players, none more so than Bismarck du Plessis, the young Pat Lambie and man-of-the-match Schalk Burger.

Springbok captain for the day Victor Matfield conceded it was a difficult encounter.

“It was very tough. The first-half we played well but in the second-half we fell asleep. The Samoans took the game to us and we’re lucky our defence held out,” he said.