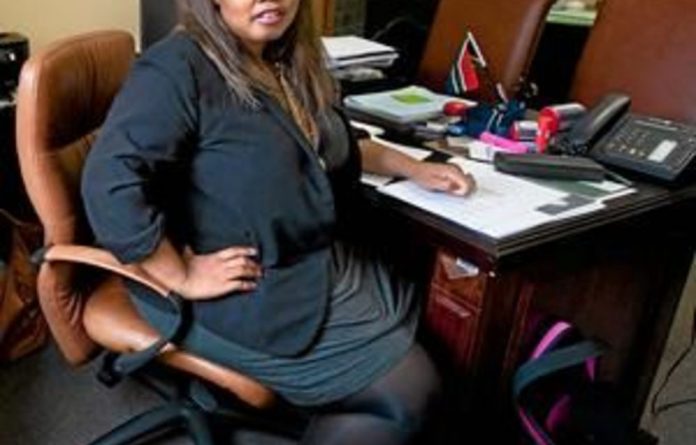 ‘Lindiwe Mazibuko: Change you can believe in, with an accent you can understand.”

Thus ran a satirical tweet from the parody @aDAvoter Twitter account after the opposition party’s 31-year-old poster girl announced her candidacy for arguably the second most powerful position in the party — leader of the opposition in Parliament, after just two and a half years in the legislature as a Democratic Alliance backbencher and one of the party’s youngest MPs.

Mazibuko is a new kind of South African politician. To unwind she likes to watch Black Adder reruns. She buys vintage clothes in Long Street, sips cabernet sauvignon at the hip Societi Bistro and cooks a mean Italian pasta.

Although she did spend some years growing up in Umlazi, after six years in her native Swaziland, she hated the massive township and felt far more at home later in life at the private St Mary’s Diocesan School for Girls in Kloof.

Culturally, she is miles from her detractors in the ANC. In a country where politics is often about song and dance, she is a brilliant debater and public speaker.

“She masters complex topics incredibly fast and then has a real ability to construct convincing arguments at speed,” said Tim Harris, the party’s go-to guy on all things economic.

After university, Mazibuko worked as a waiter in London while trying to launch a singing career.

She returned to South Africa to do her honours in political communication at the University of Cape Town. While researching her thesis on the DA in 2007 she fell in love with the party and its leader, Helen Zille, whom she previously believed was unfairly favoured because “white-owned newspapers with white-owned capitalist interests were protecting a white capitalist”.

Her own research showed up her assumptions as myth and her interview with the leader turned her into a fan. Two years later she applied for a position as research assistant to the party and the rest is history.

But it didn’t take long for the words “inexperience” and “window dressing” to start flying around. They sat comfortably alongside other terms such as “coconut” (black on the outside, white on the inside), flung her way by Higher Education Minister Blade Nzimande during a parliamentary debate in February. While the ANC MPs guffawed, the jibe was gleefully splashed across social networks at the time.

But the 31-year-old shrugged it off, then and now.

“Politics is a tough business. It’s not easy and you have to withstand a lot of attacks on your personal integrity from people you don’t know,” she said matter-of-factly in an interview with the Mail & Guardian this week.

She has repeatedly refrained from rising to the bait. It would have been easy for her to point out that she can speak isiZulu and Seswati along with her crisp model-C school English. Or to bring up how her parents, a nurse and a banker, sneaked her into a Jewish school to get her a decent education, and how they hid her under a blanket to escape the violence endemic in townships in the eighties. But she chooses not to, and only a Google search reveals the details.

Her response to her attackers evinces a combination of the thick skin and media savvy that have facilitated her meteoric rise in the opposition party — and a good dose of favour with a few powerful people within.

If Mazibuko is an established face and voice in the political sphere, it’s no accident, it has been a tightly co-ordinated exercise. She was eased into our consciousness as the party’s spokesperson and became instantly recognisable when she was used on that election poster earlier this year, alongside the power duo of Patricia de Lille and Zille.

Fast-forward a few months later and it’s the same strategy with a different cast.

Seated confidently between seasoned party leaders Wilmot James and Watty Watson, her running mates, Mazibuko cut a striking figure when she announced her candidacy last week. Her moment had arrived: gone were the loose tendrils of hair and the blue DA T-shirt. She was smart in a fitted black jacket with her hair elegantly pulled back and, the older men flanking her complemented her youthful vigour and famed eloquence.

“I believe my age is an asset to this slate and to this party’s leadership,” she told reporters in Cape Town. “We in the DA need to capture those young voters, particularly in 2014, when there’s going to be a whole new crop of so-called “born frees” (people born after the birth of our democracy in 1994) to keep that momentum of a progressive, forward-moving, modern political party going.”

But that scene was just one highlight in the DA strategy, which is swiftly carrying Mazibuko along on its tide. As one MP in her camp put it, this isn’t about Mazibuko versus Athol Trollip, the veteran incumbent she is running against: “It’s about where the party wants to go and who will take it there.”

Implementing a new vision
Mazibuko’s candidacy is just one element. Another was the pivotal document on race and transformation within the DA, penned in 2006 by wunderkind and über strategist Ryan Coetzee. Circulated internally, “Becoming a party for all the people: A new approach for the DA” started with a quotation from Nelson Mandela and noted: “The DA needs to become attractive to South Africans of all races. But to date, we have not succeeded — we still poll between just 1 and 2% among black Africans.” He pinned down a debate that had been raging in a party criticised for some time for its white image.

Coetzee and his crew, to which Mazibuko is core, have slowly and surely implemented that vision, trying to win over the various groups that have found their way into the party: the progressives, the old Nats, the conservatives. And five years later in the 2011 local government elections they went on to prove they were making some headway: 6% of the black vote, which formed 20% of their own base, according to the party’s figures.

There have been other elements; a series of chess moves played out by a new close-knit group of whiz kids who started off as researchers and administrators, who are fast moving through the ranks of the party with an agenda to transform it, with the backing of Helen Zille. They are a group who put great stock in strategy and media savvy, in contrast to the old guard of the DA who valued grassroots caucus work and loyally working one’s way through party structures. Mazibuko is the face of that movement.

But her rapidly rising star has left some resentment in its wake. Soon after her announcement, reports emerged of black MPs preferring her white opponent. They questioned her inexperience, youth and even her closeness to Zille. Would the party’s forceful leader use her to run the caucus by remote control?

Nonsense, claimed others. Former National Party conservative Theuns Botha told the M&G: “The opinion of Helen Zille does not put people under pressure as such, but it does give guidance and leadership on the relevant matter to consider.”

Others, notably black MPs in the party, begged to differ. “If a leader speaks, people listen. It compromises the process,” said one.

‘Battle for the DA’s soul’
Meanwhile, analysts have been lauding the nomination of Mazibuko, calling it the battle for the soul of the party. She seems positioned to win, but the vote on October 27 will no doubt be close. To combat her “perceived weakness” (as one MP put it) of inexperience, she’s pulled the clever trick of surrounding herself with veterans.

As DA MP Ian Ollis, himself a relative newcomer, recently noted: “We all start somewhere, without experience.”

Even the ANC’s Eric Kholwane, who served as whip in the communications committee where Mazibuko also sat at one time, commended her. “She was effective in the line of what she was doing. I do respect her and her views, though we did disagree.”

Undoubtedly she has been favoured. Township born and bred DA party members who have patiently put in time in the background have been left reeling in Mazibuko’s wake.

“There seems to be an erosion of democracy in the party, where we undermine internal structures and processes and simply parachute people in like they are some kind of messiah at the expense of foot soldiers who stood by the party in the darkest periods,” said one embittered black MP.

But then he hit on a niggling issue: why had the race been reduced to black versus white? “Instead of getting options [of different black candidates], you get the feeling that this is the only black person, the only option.”

The DA typically insists it is “post race”, and its leaders constantly try to stay away from the narrow black versus white debate the media and their critics would herd them into. In our interview Mazibuko carefully noted that the “DA has never made any bones about wanting a more diverse leadership” but maintained that included “gender, language, race and so on”.

But it’s hard to escape the race obsession in a country like ours.

The nominations of Mazibuko and Trollip have polarised the debate, whether the DA likes it or not. But any way you cut it, the party is ripe for a black leader. Whether Mazibuko is ready for such dizzying heights of leadership at such a young age is the question that may well decide the future of the party.

This article was amended October 7 2011. The original version incorrectly stated that Theuns Botha would be voting in the race. He is not an MP and therefore will not vote.