Paul McCartney weds US heiress (She loves you, yeah?) 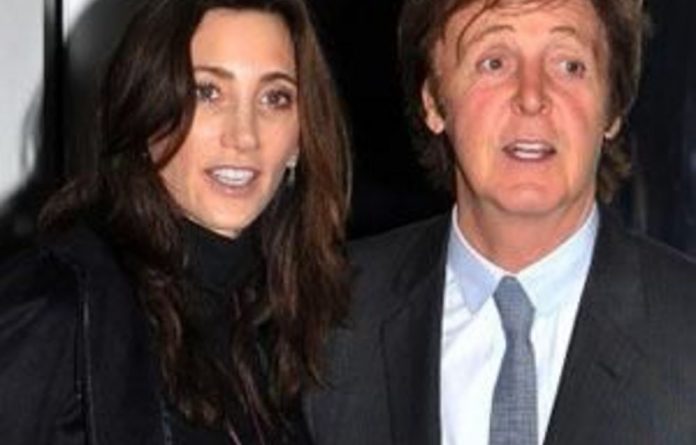 Former Beatle Paul McCartney married for the third time on Sunday, tying the knot with New York heiress Nancy Shevell at the same London venue where he married his first wife.

The couple were showered with flower confetti by a small group of friends and family after the civil ceremony at Westminster Register Office.

The town hall was where McCartney married his first wife, Linda, in 1969. She died of cancer in 1998.

The low-key ceremony, which was followed by a party at McCartney’s north London home, was a stark contrast with his lavish second wedding to former model Heather Mills in 2002, when 300 guests filled a castle in Ireland.

Millstone
That marriage ended in an acrimonious divorce, which was finally agreed in 2008 after almost two years of wrangling when Mills received a settlement worth £24.3-million.

McCartney, 69, and his 51-year-old bride have been dating for four years and announced their engagement in May.

As they emerged from the register office, McCartney held up his new wife’s hand to loud cheers from hundreds of well-wishers outside, before heading to his home in the upmarket district of St John’s Wood for the reception.

Asked at the house how he felt, the former Beatle, wearing a dark suit with a white shirt and pale blue tie, told reporters: “Terrific, thank you. I feel married. I feel absolutely wonderful.”

Among the select number of guests at the ceremony was Beatles drummer Ringo Starr, wearing a dark suit over a T-shirt and trainers, and his trademark tinted glasses. He gave a peace sign to the crowd before going inside.

Beatlemaniacs present and accounted for
McCartney’s appearance sparked even more hysteria, with hundreds of people shouting his name, including a woman from New York who could not believe her luck at being on holiday in London at the same time as the marriage.

“I’m 55, and I’ve been a fan all this time. I’m thrilled!” said Regina Bellisari. “My sister went to the first Beatles tour in the US, but I was too young. She always rubbed it in my face, but now I can finally get her back.”

Guests including Rolling Stone Ronnie Wood and guitarist Jeff Beck were later spotted arriving for the marquee reception in McCartney’s garden, where they were treated to a three-course vegan meal.

McCartney had one child with Mills — a daughter, Beatrice, who was born in 2003 — and another four from his first marriage. Shevell also has a son, 19-year-old Arlen, from her first marriage to a US lawyer.

Despite the pressures of dating one of the world’s most famous musicians, Shevell has largely kept out of the spotlight, although she appeared at ease with the hordes of photographers at Sunday’s wedding, giving them a big grin.

Questioned about her relationship by the New York Observer ahead of the big day, she expressed surprise at the public interest.

“I’m over 50. I work. That’s it. I haven’t been social and I have a small group of girlfriends. There really isn’t much to talk about.”

But Shevell also has a tidy fortune of her own. She is heir to her father’s trucking business, New England Motor Freight, where she is a vice president.

She holds a degree in business administration from Arizona State University where she majored in transportation, and has also sat on the board of the New York Metropolitan Transit Authority for 10 years. — AFP