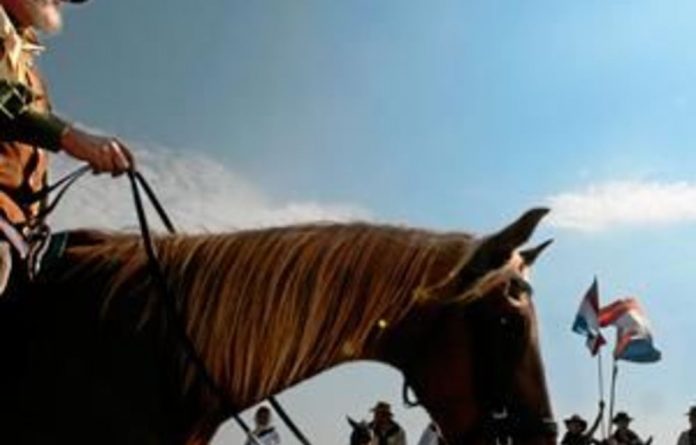 More than 350 000 people have seen the famous “Don’t touch me on my studio” clip on YouTube alone, but who remembers what prompted it?

Pheko: It’s a narrow perspective, Mr Visagie, and that’s the most unfortunate part of it.

Visagie: It’s not a perspective; it’s a real fact.

Pheko: Do you care about the starving millions of African people in this country?

Visagie: I care most —

Visagie: No, no, no. Don’t interrupt, interrupt me. I’m finished. Thank you. Bye.

I was reminded of this infamous incident when I read Samantha Vice’s defence of her piece on the ethics of self-reflective white silence, a piece that has spawned a trenchant, heated debate in the Mail & Guardian, online and on radio. The gist of Vice’s plea is that history places a moral burden on whites; it requires them to “cultivate humility and silence, given their morally compromised position in the continuing racial and economic injustices of this country”. Visagie’s “I touch you on your studio” seems to lend credence to Vice’s position.

But, reading Vice, I was caught between two reactions. The first and most flagrant and visceral was: I don’t flipping care. I wanted to meet this white threat of silence with a black silence of my own. The second reaction was more measured, but I hated it more, because it requires that I say: “Please speak, baas!”

Vice’s position is well meaning. She is calling on whites to be disloyal to whiteness. Reflection about white privilege is certainly a necessary part of the equation. To paraphrase James Baldwin, it is not a black revolution that many whites fear, it is their own choosing to cast their lot with the still subjugated blacks in this country. To them the possibility of this “whitelash” against white privilege is unsettling. Thus the violence visited on some whites who dared to speak about white guilt, for example Stellenbosch professor Anton van Niekerk.

The source of white guilt is often well informed: it recognises and despises the ill-gotten advantages of whiteness. Indeed, there are many positives in this economy of white guilt. Its currency of embarrassment and shame is certainly valuable when it leads to the recognition of ill-obtained privilege, commiserating with those stuck in apartheid-induced poverty and those who agonise in the echoing insults of apartheid. But if all the expenditure on this economy of guilt only leads to reflective silence, what is its profit?

I have not seen any corrupt institutional arrangements corrected by silence. Even if thinking, well-meaning whites step into the background, the old bearded brutes who belch rancid racism will gladly take the white megaphone.

Silent humility
There is also something troublingly false about this vow of silent humility. This willed silence ironically highlights whites’ position of privilege and reaffirms “whiteness” as the centre of debate. It is ironic that Vice’s piece about silence and humility has generated so much public controversy. It’s also condescending: we’ve dominated the discourse; we will now give the poor blacks the microphone because they can’t do it on their own.

I also worry that, even though the Vice position recognises the institutional nature of racism, its solutions place racism at some individual discursive level – to wit, racism can be corrected by tinkering with behaviour (less words, more humility). From Vice’s and other pieces, I for one got no idea how whites are to disavow the structural benefits of racism.

Vice is clear that she is not calling for whites to withdraw from public life. But I worry that her plea has a disturbing family resemblance to the politics of withdrawal that whites are accustomed to the world over. Google “white flight”. We’ve seen whites withdraw: hundreds of thousands have emigrated to lands where apartheid decimated indigenous populations, others to Orania, and many have withdrawn to their gated communities. How do you actively participate in public life quietly?

Back to the “Don’t touch me on my studio” incident. I’m sure Visagie has “silently reflected” on his white privilege. And, apparently, he likes it very much. Much as I revile the AWB, I want to hear him speak and I want to confront him. I want to hear him fail spectacularly to articulate his position in an intelligible way.

A black woman confronts him with the facts of structural racism and he withdraws, but not into the reflection Vice recommends. He resorts to a style most familiar to him: physically rising up and imposing himself over a black woman, pointing a threatening finger at her. It was there for the world to see.

Imagine if the likes of David Webster had chosen Vice’s reflectively silent route. One of Webster’s early anti-apartheid acts was a protest at Rhodes University — Vice’s own institution, in fact. Indeed, when the likes of Visagie and AfriForum try to dominate public discourse, progressive whites in this country don’t have the right to remain silent. We have too big a project to undertake.

To reverse the centuries of subjugation and chart a way forward we need their account of history, of the present, and how they will participate in making this a better country. That kind of talk isn’t cheap, as Webster’s 1989 assassination sadly demonstrated. Bua!

Mvuselelo Ngcoya teaches in the School of Development Studies at the University of KwaZulu-Natal.

Academic Samantha Vice has caused a storm of controversy with her thoughts on white shame in South Africa. Read the reactions. view our special report.