Ramrod Roberts at the heart of Welsh revival 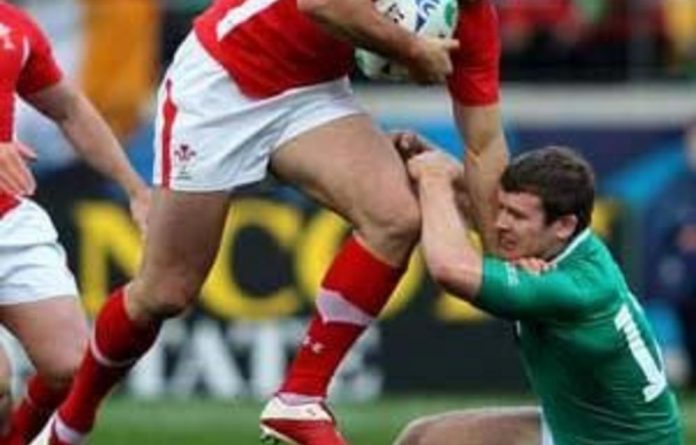 Jamie Roberts will be aiming to produce another midfield masterclass of hard-running attack and miserly defence when Wales tackle France in the Rugby World Cup semifinal on Saturday.

The 24-year-old centre, in his fourth year of a medical degree, has of late regained the form that saw him crowned man-of-the-series when playing superbly for the British and Irish Lions against South Africa two years ago.

Roberts has gelled nicely with the Scarlets’ Jonathan Davies in the centres and the pair have proven to be Wales’s invaluable go-to men, capable of getting the side on the front foot, while making few defensive errors.

“Quite simply, he’s the best centre in the tournament,” was France coach Marc Lievremont’s blunt assessment of Roberts.

France scrum-half Dimitri Yachvili added: “He’s their key player. When the team is down, he takes the ball up to cross the gainline and put Wales on the front foot. You have to wrap him up quickly.”

The player most likely to be charged with “wrapping up” Roberts will be Clermont veteran Aurelien Rougerie, preferred at centre rather than his normal position on the wing.

“Jamie Roberts helps his team move forward every time he touches ball. The team rely on him to a great extent so he absolutely represents a challenge for us and me,” Rougerie said.

“It’s something we’re going to need to be looking at in our preparation for this match.”

Incredible defence
Roberts, who has also played occasionally on the wing and at fullback during his 38 Tests, rated Wales’s impressive 22-10 victory over Ireland in the quarterfinal as “probably the best day of my career”.

“This team is very close,” he added. “What we’ve been through the last few months, that’s is why we are close together. It’s a snowball now … It started with our first loss against South Africa in the pool stages. The way we played that day, I think it put us on a good path,” he said of a 16-17 loss to the defending champions … We know there are two games to go. We’d love to win the semifinal. To be in the World Cup final would be very special.”

Roberts pinpointed defence as key to Wales’ progress to a first semifinal since the inaugural World Cup in 1987.

“Early in the second half, we conceded an early try, but the boys showed great reserve. The most pleasing is our defence. Our forward pack was immense and we kept the backline pretty quiet.”

Roberts added: “There is a lot of belief in the camp. That’s important. The hard work’s been done and we just need to go out on the day and deliver.”

But the centre warned that France would be no pushover after their 19-12 victory over England in the quarters, adding the youthful Wales team would have to choose when to throw the ball about.

“The nine and 10 (Yachvili and Morgan Parra) are very good thinkers. From nine to 15 their backline is a huge threat and it will be our biggest defensive effort yet … We don’t want to take away any confidence from the boys, but we know it is knockout rugby now … We don’t want to rein in our open rugby, but we know against France it takes one turnover and they can hurt you. So we will have to pick our moments to play rugby.” — AFP