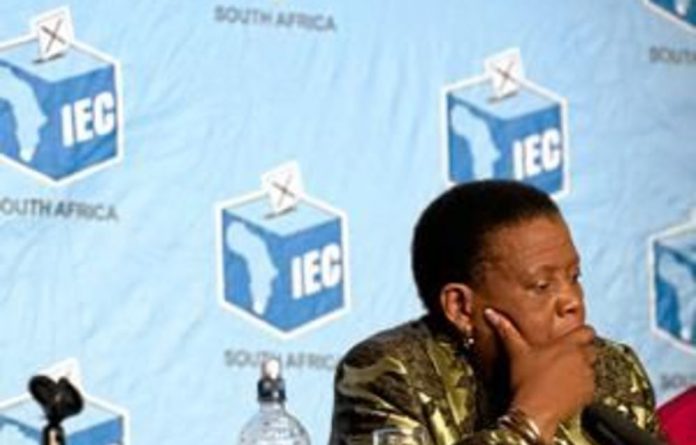 The positions became vacant on Wednesday this week with the departure of the IEC chairperson Brigalia Bam, deputy chairperson Thoko Mpumlwana and commissioners Fanie van der Merwe and Terry Tselane.

The position of the IEC’s chief electoral officer, currently held by Tlakula, will become vacant once Zuma appoints the new commissioners in the next few days.

At the beginning of the IEC interviews, the former director general in the presidency, Frank Chikane, was seen as the favourite to succeed Bam. But he failed to make it to the final shortlist.

Chikane fell out of favour because of his virulent attacks on Zuma and the ANC in a controversial series, “Chikane Files”, published in The Star last year.

This week, government sources said that the presidency and many ANC members favoured either Tselane or Tlakula to succeed Bam as IEC chairperson, according to people familiar with discussions around the post.

“In terms of experience, Tselane should be a shoo-in,” said one source. “He boasts an incredible institutional memory. Remember that he was appointed Gauteng provincial electoral officer in 1998 and basically served as accounting authority of the IEC in Gauteng.

“He has experience and Zuma is said to favour him to replace Bam for the sake of continuity and experience at the highest level.”

‘Most suitable candidate’
But another source said Tlakula, as the former chief executive of the IEC, was the most suitable candidate for the chairperson’s position because of her vast experience while in charge of operations at the IEC over many years. Nominations for the positions of IEC commissioner will be approved by the National Assembly on Tuesday.

Zuma will make the formal appointments in the first week of November.

According to staff at the IEC, the organisation urgently needs leadership because a number of immediate tasks must be undertaken.

Commissioners’ initial tasks will include helping the war-torn Democratic Republic of Congo to conduct “credible and peaceful” elections following reports of election-related violence in Kinshasa.

The new commissioners are also expected to put into place systems that will enable a single election for all spheres of government to take place at the same time in South Africa by 2014.

Zuma bade farewell to the outgoing commissioners last Saturday night at a gala dinner held in their honour at the Sandton Convention Centre.

He praised them for serving South Africa with distinction and confounding critics who thought that South Africa would not be able to hold “incident-free” polls.

“Under your stewardship, the IEC has placed South Africa at the forefront of electoral democracy in fulfilling the mandate and commitment to constitutional democratic principles,” said Zuma.