‘Historic moment’ for DA: The rise of Lindiwe Mazibuko 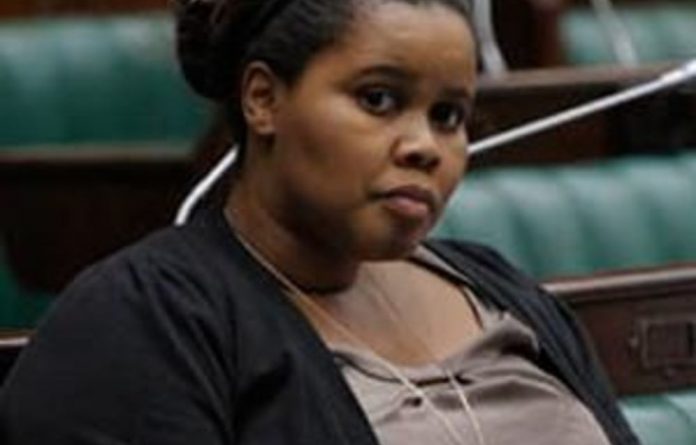 Senior Democratic Alliance members of Parliament claimed there had been “blood on the floor” during the campaign to elect a new DA leader in Parliament.

But when 31-year-old Lindiwe Mazibuko swept into the position of DA parliamentary caucus leader against incumbent Athol Trollip on Thursday, the party presented a seemingly calm, united front.

Sitting between Trollip and party leader Helen Zille at a press conference on Thursday to announce her win, Mazibuko said it was hard to describe how she felt about the historic choice of the first black DA leader of Parliament, but she admitted it had been a “hard-fought and rigorous election”.

Describing the atmosphere in the caucus room as “jovial”, she said there was a commitment to “taking the party forward”. “They had been counting so long that by the time counting officers came back we were all having tea and hugging each other.”

Mazibuko delivered a speech to the caucus shortly before her victory on Thursday, which offered a glimpse into the DA’s future strategies.

Growth for the party, she said, would come from urban voters, who have seen the DA’s level of delivery in government, as well as from rural voters disillusioned with the ANC Most importantly, the party would grow from votes from among the “three million young South Africans who will vote for the first time in 2014”.

Groomed for the role
Mazibuko said she did not want to predict what would happen after her two-and-a-half-year term was up, and would not elaborate on whether she planned to run for the post of party leader.

Caucus members say Zille openly lobbied for her, and was grooming her for the top post.

“I am overwhelmed, but excited. It is wonderful that my colleagues had faith in me, and have confidence that I can lead this caucus,” said Mazibuko. “But I have two articulate men of stature, Watty Watson [DA chief whip in Parliament], and [caucus chairperson] Wilmot James, and I will lead the caucus in tandem with them, as a team,” said Mazibuko.

Zille declined to divulge the numbers of votes the candidates received, as she said it was not caucus policy, but whispers in parliamentary corridors were that Mazibuko received 50 votes to Trollip’s 31.

“Margins were very different in each case and there was not slate voting,” said Zille. “I just can’t breach caucus ethics here.” Zille admitted that during the elections “things get said and names get thrown around”, but once it was over, she said, the caucus would again be cordial.

Trollip announced he would be “staying on the benches of Parliament”, working hard as leader of the party in the Eastern Cape, and spending more time with his family. With good humour he warned the press in advance that he would not be at the caucus meeting on Thursday afternoon because he had other engagements, including spending time with his wife, who was turning 50.

Internal politics
Party sources said Trollip made an “angry” speech to the caucus before the voting took place, criticising Zille’s role in the campaign, and complaining of the perceived manipulation and intimidation of members. He declined to confirm or deny this. “What I say to caucus happens in caucus, and stays in caucus,” he said.

Zille paid tribute to Trollip for his leadership, fluency in three languages and his “extreme graciousness”. She did not deny that the chairperson of the federal executive, James Selfe, had asked Trollip to step down, but said this did not place the internal democracy of the DA at risk.

Smuts made it clear during the campaign that she backed Trollip’s leadership and experience. Before he was voted out Trollip told the Mail & Guardian he would not step aside because of his race, and the country had to go back to the time and concept of the rainbow nation. “We have to get away from racial polarisation and politics,” he said.

Zille stressed at the press conference that there would be no purging of members or bitterness following the tough campaign.

But Masizole Mnqasela — a DA MP who has been causing waves in the party — said he would continue to speak out against candidates he felt were not ready for promotion. His backing of Trollip had “soured” his relationship with Zille, he said on the eve of the election.

In a letter he sent to the party last week Mnqasela said the way some had approached the issue of diversity was inconsistent with the vision and objectives of the party and its philosophy of an open society for all.

“We are doing bean-counting and sugar-coating by simply anointing those who are close and favourites to the senior leadership of the party in the name of diversity,” he wrote.

Nobody’s puppet
Mnqasela said he feared Zille would control the caucus if an inexperienced leader was in the key position in Parliament.

Mazibuko was quick to deny this, saying: “I enjoy a professional and friendly relationship with our party leader, but I also differ with her on a regular basis. “I intend to continue that position. We elected her and we signed up with her vision.”

As parliamentary leader Mazibuko will now face senior ANC members, including President Jacob Zuma, across the National Assembly floor.
Mazibuko was adamant she would not let her relative inexperience and youth determine her engagements with the majority party.

The robust level of debate in the National Assembly often means there are heated exchanges, she said. “But I am sure [the ANC] will respect, as the Constitution dictates, the office of the leader of the opposition.

“Where I feel that respect is not being delivered, I am perfectly capable of commanding it.”

Mazibuko also dismissed concerns that she had run an external as well as an internal campaign.

“The party is still crafting ways of doing things, but we believed there was enough appetite and interest to run these campaigns.”

Her tired campaign manager, MP David Maynier and the DA’s spokesperson for defence, said he was “ecstatic” about her victory.

Watty Watson will take over from Ian Davidson as the chief whip in Parliament.

Watson, formerly the leader of the DA in the National Council of Provinces (NCOP), told the press briefing that he intended to be a “hands on” chief whip but promised to remain in touch with the aspirations and feelings of caucus members.

Watson will take over from Davidson, once the DA’s federal executive ratifies his position.

He has, however, been appointed as a whip, along with new members to the whippery Dion George, Eric Marais, Piet Pretorius.