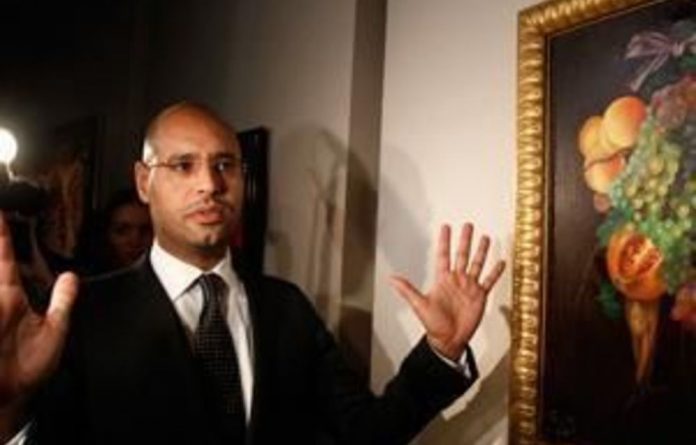 The prosecutor for the International Criminal Court (ICC) said on Sunday he has “substantial evidence” that Saif al-Islam Gaddafi, now on the run, had helped hire mercenaries to attack Libyan civilians protesting against his father’s rule.

Saif al-Islam may be heading for Niger, which could upset Libya’s new rulers and its own pro-Gaddafi Tuareg nomads if it hands him over to the ICC in line with its treaty obligations.

“We have a witness who explained how Saif was involved with the planning of the attacks against civilians, including in particular the hiring of core mercenaries from different countries and the transport of them, and also the financial aspects he was covering,” ICC prosecutor Luis Moreno-Ocampo told Reuters during a visit to Beijing.

Saif al-Islam (39) is desperately seeking to avoid the fate of his father, Muammar Gaddafi, who was beaten, abused and shot after forces of Libya’s National Transitional Council (NTC) captured him on October 20 after the fall of his home town Sirte.

The NTC is likely to want to try Saif al-Islam itself, but the fugitive Libyan has been in indirect contact with the ICC over a possible surrender, though he may also harbour hopes that mercenaries can spirit him to a friendly African country.

Neighbouring Niger has vowed to honour its ICC commitments, but knows that handing over Saif al-Islam could spark unrest in Saharan areas where his father, feted by many desert-dwellers as a hero, nurtured past Tuareg revolts against the capital.

Moreno-Campo said the ICC had witnesses to testify against Saif al-Islam, whom he said he had met a few years ago — when Saif had backed ICC efforts to arrest Sudanese President Omar al-Bashir over alleged genocide and other crimes in Darfur.

“So we have substantial evidence to prove the case, but of course Saif is still [presumed] innocent, and [will] have to go to court and the judge will decide,” he said.

Moreno-Ocampo said he would brief the UN Security Council on Wednesday about the court’s work in Libya.

The Hague-based court has warned Saif al-Islam that it could order a mid-air interception if he tried to flee by plane from his unidentified Sahara desert hideout for a safe haven.

No negotiations
“We are not in any negotiations with Saif,” he said, adding that the ICC would not later force him to return to Libya provided another country is willing to receive him after he is either acquitted or is convicted and has served his sentence.

Before a popular uprising imperiled his father’s grip on Libya, Saif al-Islam had cast himself as an enlightened supporter of reform at home and across the Arab world. But then he swore to crush opponents of his father’s 42-year rule.

Asked about Saif al-Islam’s metamorphosis, Moreno-Ocampo said: “After all these years, nothing surprises me.”

Niger has not commented on statements by local northern leaders that Saif al-Islam was probably on its side of the mountains straddling its porous border with Algeria and Mali.

An official for the remote northern Agadez region, through which another fugitive Gaddafi son, Saadi, has passed, said on Saturday it had hosted security talks with US officials.

The official, who requested anonymity, spoke of escape plans by Saif al-Islam and former Libyan intelligence chief Abdullah al-Senussi, both wanted by the ICC for war crimes.

“Senussi is being extricated from Mali toward a country that is a non-signatory to the (ICC) convention. I am certain that they will both [Senussi and Saif al-Islam] be extricated by plane, one from Mali, the other from Niger,” he said.

A member of Parliament from northern Mali, Ibrahim Assaleh Ag Mohamed, denied Senussi was in his country and said neither he nor Saif al-Islam would be accepted if they tried to enter.

Niger, like Mali, has signed the ICC’s statute, but handing over Saif al-Islam would annoy northerners who feel remote from the capital Niamey and have long espoused Gaddafi’s vision of a cross-border Saharan people.

“We are ready to hide him wherever needed,” Mouddour Barka, a resident of Agadez town, told Reuters, adding that if Niger authorities handed him over: “We are ready to go out on to the streets and they will have us to deal with”.

The Gaddafis befriended desert tribes in Niger, Mali and other poor former French colonies in West Africa. Gaddafi, a self-styled “king of kings”, lavished funds on other African nations.

The ICC accuses Saif al-Islam of hiring mercenaries to carry out a plan, worked out with his father and Senussi, to kill unarmed protesters inspired by Arab uprisings elsewhere.

Algeria, which took in Saif al-Islam’s mother, sister, brother Hannibal and half-brother Mohammed, is not a signatory to the treaty that set up the ICC. Nor is Sudan or Zimbabwe. – Reuters