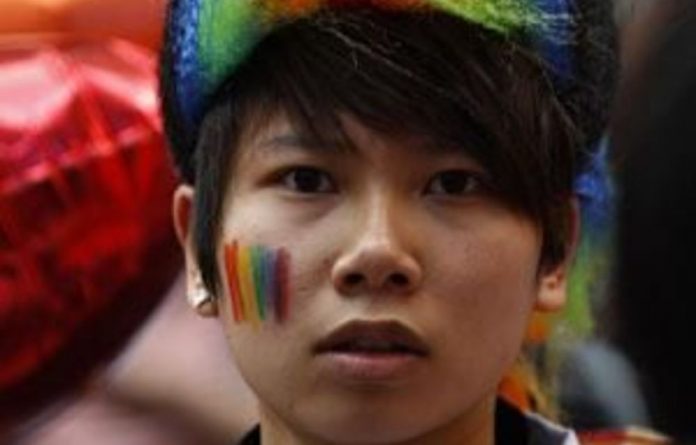 More than 2 000 people marched in Hong Kong’s gay pride parade on Saturday, as campaigners called for the enactment of laws to ban discrimination against homosexuals.

The crowd, mainly from the lesbian, gay, bisexual and transgender community (LGBT), as well as their supporters and sex workers, paraded through the city centre in a carnival-like atmosphere during the hour-long procession.

Armed with rainbow-coloured gay pride flags, penis-shaped soft toys and banners that proclaimed “Queer is my power”, the group also chanted slogans including “We love gays”. Some activists handed out “finger condoms” to the marchers.

The event’s dress code was “sexy and act out” but most were dressed more modestly with only a handful of marchers clad in colourful outfits. The theme of the parade was “For queer, for love, for equality”.

“We are here today [Saturday] because we want society to know who we are and we hope they don’t discriminate against the LGBT community,” said Mic Au, a 21-year-old student, wearing a rainbow-coloured wig and face paint.

“I hope the government will enact laws that ban discrimination against homosexuals, at workplace or at schools,” she said, against the backdrop of pop diva Lady Gaga’s Born This Way, which has become an anthem for LGBT rights.

A large number of gay rights activists from Taiwan and mainland China were also present, as well as campaigners from the non-LGBT community.

“Hong Kong is much more progressive than the rest of Asia, the LGBT groups are getting more prominence here,” said Goki Muthusamy, a Singaporean who moved to Hong Kong three months ago and a first-timer at a pride parade.

“It’s all about visibility of the community. People should support them, just like supporting any women’s groups or philanthropy events,” said the bank official, who attended despite not being a member of the LGBT community.

Despite its reputation as an international financial hub, critics say Hong Kong remains a conservative city when it comes to gay rights, lacking protection for the sexual minority group despite having decriminalised homosexuality in 1991.

Gay rights activists were outraged after the government in June hired a psychiatrist who claims homosexuals can be “cured” to train government counsellors, criticising the bid as an “international joke”. — AFP