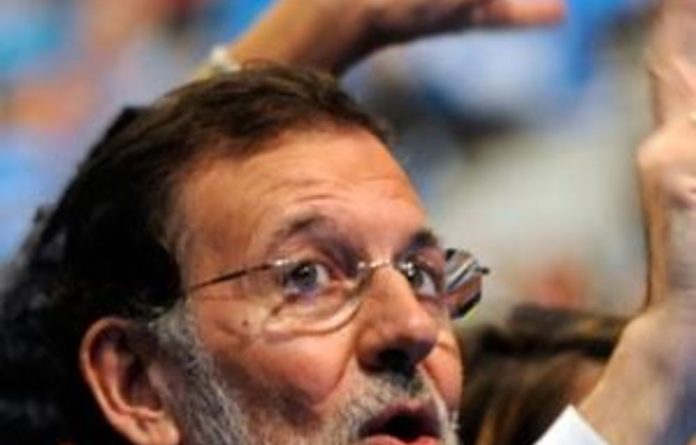 Spaniards voted in rain-sodden elections on Sunday that were all but certain to hand a thundering victory to the right and topple yet another debt-laden eurozone government.

Bowed by a 21.5% jobless rate, economic stagnation and deep spending cuts, the first voters of the 36 million-strong Spanish electorate headed to polls ready to punish the ruling Socialists.

“Spain chooses a government to confront the crisis storm,” blared the front page of the leading centre-left daily El Pais.

Opposition Popular Party leader Mariano Rajoy has a lead of about 15 percentage points over the Socialists, the latest polls showed, enough for an absolute majority in parliament and a free hand to reform.

Venting anger
Voters vented anger with the ruling Socialists over the economic crisis that has pushed the number of unemployed close to five million but some were also wary of Rajoy, who has promised even deeper spending cuts.

Octavio Arginano, a retired 67-year-old factory worker, said he voted for the right for the first time in his life.

“My son has been unemployed for over a year, my daughter earns just €600 a month looking after young children,” he said as he left a polling station in the Madrid neighbourhood of Lavapies.

“There has to be a change although I am not sure anyone knows what to do to get us out of this situation.”

If the polls are right, Spain would become the last of the so-called periphery eurozone nations to ditch its government this year, after the debt crisis toppled rulers of Ireland, Portugal, Greece and Italy.

‘Historic crossroads’
The ruling party’s candidate, Alfredo Perez Rubalcaba (60) cast his vote in Madrid shortly after the polls opened and urged Spaniards not to shun the polls.

“Spain is at a historic crossroads,” he told reporters. “The next four years are very important for our future and in these conditions it is even more important that people vote.”

Some voters expressed disillusion, however.

“I am going to cast a blank ballot,” said 46-year-old schoolteacher Fernando Javier Alvarez, sheltering under an umbrella at a voting station in a school in southern Madrid.

“The [Socialist Party] PSOE made five million people unemployed and lied to us about the economic crisis,” said Alvarez. “All the parties of the left and right reflect the same ideals.”

Uncharismatic
Though considered uncharismatic even by many of his supporters, the 56-year-old Rajoy has galvanised support by promising a break from the past to fix the economy and create jobs.

Rajoy has vowed to make cuts “everywhere”, except for pensions, so as to meet Spain’s target of cutting the public deficit to 4.4% of gross domestic product in 2012 from 9.3% last year.

Spain’s risk premium — the extra interest rate investors demand compared with safe-haven German debt — shot to a euro-era high of more than 500 basis points in the days ahead of the vote.

Nationwide protest
A nationwide protest movement erupted in May to vent anger over the high jobless rate and perceived corruption among politicians. Hundreds of “indignant” protesters rallied in Madrid in the days leading to the vote.

Whatever the outcome of the vote, some analysts say the answer to Spain’s problems lies beyond its borders, with the European Central Bank.

Further labour and banking reforms “may not be enough to stabilise the Spanish sovereign,” analysts at Barclays Capital warned. “Ultimately, we think it likely that the ECB will need to step up its support.”

Once the votes are counted on Sunday night it will take a month for the new prime minister to be formally sworn in.

Who is Rajoy?
Rajoy is a cautious moderate who makes an unlikely crisis manager for a country engulfed in the eurozone’s debt crisis.

The former interior minister struggles to crack a smile and his huge, 17 percentage point lead in opinion polls is built more on mistakes by the Socialists, in power for the past seven years, than on his own vision or inspiration.

Still, his centre-right People’s Party is expected to win by a landslide with voters blaming the Socialists for economic woes that have pushed the country’s unemployment rate to 22%, the highest in the European Union. The country is expected to head back into recession next year.

Rajoy, who studied law and worked as a land registrar before getting into politics in his mid-20s, is better known for self-restraint, for listening carefully to advisors and for preaching patience than for taking strong initiatives or inspiring his followers.

“He will make the right decisions but as in the rest of the European Union right now, the question is whether the decisions can be made in time,” said Jose Maria Areilza, dean of the IE law school in Madrid.

Rajoy, who has little international experience and limited English, is expected to name a heavyweight economy minister to deepen painful austerity measures at home and travel abroad to persuade investors that Spain has its accounts in order.

After being elected to several local and regional posts in Galicia in the 1980s, Rajoy moved to Madrid and served in four different ministerial posts under Jose Maria Aznar, Spain’s pro-Washington prime minister from 1996-2004.

Aznar named Rajoy to succeed him as party leader, and if it had not been for an Islamist attack on Madrid commuter trains three days before the 2004 parliamentary election, he would probably already have been prime minister by now.

Pragmatic independence
Aznar wrongly blamed Basque separatist group ETA for the train bombings, which were carried out by Islamist extremists, handing a surprise victory to the Socialists. Rajoy ran and lost again in 2008 and was savaged even by the right-wing press.

But he survived an attempt to oust him, quietly getting rid of the old Aznar conservatives and moving the PP toward the centre. His discrete power plays and pragmatic independence differentiate him from typical PP leaders, known for their ideological force or authoritarian style.

“He embodies a type of soft power, little inclined to impose things, more about convincing, and that’s what Spain needs right now most of all,” said Lassalle, who has known Rajoy for eight years. — AFP-Reuters