Test balanced on a knife edge ahead of Monday’s play 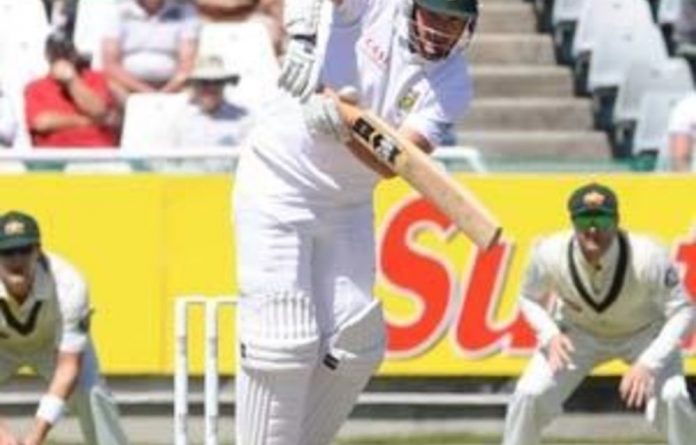 Proteas’ century-maker Hashim Amla said the second Test against Australia could go either way after Imran Tahir took a late wicket to break the partnership which had rescued Australia from a dire position on Sunday.

“The game is evenly balanced and if we can pick up an early wicket [on Monday], it will put a lot of pressure on Australia,” Amla said.

The Baggy Greens require another 168 runs, with seven wickets in hand, to level the two-Test series going into the last day of the final Test at the Wanderers in Johannesburg.

Tahir’s wicket brought to an end a third-wicket stand of 122 runs between Usman Khawaja and Ricky Ponting, who came together when Australia were 19 for two.

Khawaja reached his first half-century in only his fourth Test off 95 deliveries and together the pair scored freely and ran well between the wickets. It was a soft ending for a superb innings from the 24 year-old Pakistan-born player when Tahir’s second-last delivery of the day shaved his bat and veered towards Jacques Kallis at slip.

‘Big boost’
“Getting a wicket so late in the day was a big boost for us but, if the batsmen get another partnership going, they can score quickly with the fast outfield,” said Amla.

Fighting to retain his place in the Test side, Ponting scored his 57th half-century and his unbeaten 54 was his highest score from his last 14 outings.

Vernon Philander came out firing at the start of Australia’s innings and struck twice to remove both of the openers, within his first two overs.

His second delivery of the day straightened from a length on off-stump and clipped Shane Watson’s bails before Australia had a run on the board.

In his next over, Phillip Hughes (11) edged Philander’s delivery to Jacques Kallis at second slip.

Close of play
Khawaja and Ponting restored the innings and stayed together for 34 overs before Michael Clarke had to face just one delivery before the close of play.

“Any target over the 300 mark is quite daunting and Dale’s innings, coming in at the back end, helped us tremendously,” Amla said.

The youngster returned figures of six for 79 in only his fourth first class match.

“Just knowing what the batsmen are capable of here it’s daunting but once you get into a spell, you start to forget about those things,” said Cummins whose scalps included Jacques Kallis and AB de Villiers.

“The game is in the balance right now but we’ve got ourselves back into it and with someone like Ricky there, it’s an exciting setup for tomorrow [Monday].” — Sapa