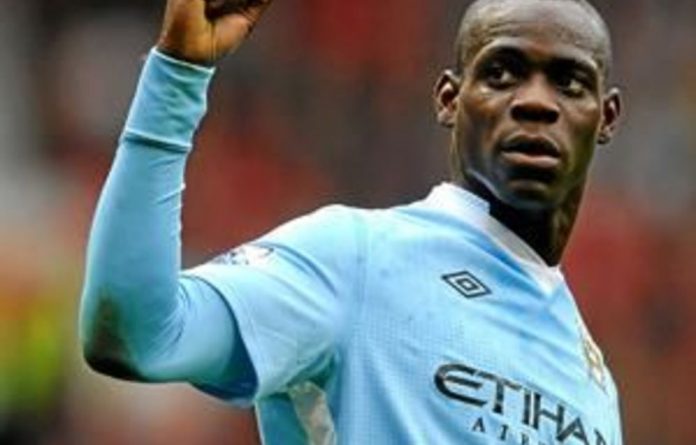 In Mario Balotelli English football has found its bad boy. In the Manchester City striker football intersects with the theatre of the absurd. Balotelli’s world involves the bizarre bouncing off the breathtaking in a fascinating yarn with a brilliant plot and countless digressions.

Recently, Balotelli came on as a substitute in City’s match against Liverpool; 18 minutes later he had been shown a second yellow card and was walking off to the dressing room. A few weeks ago he scored a penalty and, instead of celebrating, folded his hands, darkened his face and paced around menacingly. Last week he scored a goal against Norwich by using his shoulder to impudently nudge the ball into the net. In the match against Manchester United he scored and then pulled over his shirt to reveal a vest on which he had written a cryptic question: “Why always me?”

He even dresses the part. Balotelli’s preferred hairstyle, a Mohican, is always reimagined in funky permutations. A recent hairstyle, a labyrinthine Mohican, made me remark: “How long did it take the barber to get that look?” On certain days he peroxides it, on others it’s plain black. That’s perhaps a cue to talk about his dual heritage.

The striker was born to Thomas and Rose Barwuah, an immigrant Ghanaian couple living rough in the city of Palermo. They put Mario up for adoption in 1993. An Italian family, the Balotellis, raised him as their own. When the 21-year-old footballer was playing for Inter Milan, his parents began making overtures.

He told a newspaper: “If I hadn’t become Mario Balotelli, then Mr and Mrs Barwuah would not have cared about me. I was adopted by the Balotelli family when I was just two. Why? No one has ever asked the Barwuahs and now they are doing interviews in papers holding my photo on an Inter shirt with sad faces.

“Why did they never ask the courts to take me back once I had recovered from illness? My adopted parents used to take me there to see them, but they were never at home. But now that I am a Serie A player, they want to come and find me.”

A few years ago, when Balotelli was still in his teens, the Ghanaian football association heard about a talented boy with a Ghanaian connection. An emissary of the association duly made contact, asking him whether he would consider playing for the Black Stars. He declined the offer, a decision I applauded.

Even though racist fans were chanting: “A black Italian does not exist,” Balotelli refused to be bullied, holding out for playing for the land of his birth. “I am more Italian than those Juventus fans in the stands,” he said after a particularly racially charged match.

Ghanaianness isn’t part of anyone’s make-up, you don’t pass on Ghanaian DNA to your children. Balotelli’s frames of references are wholly Italian, not Ghanaian. He grew up in an Italian household, immersed in Italian culture. He is Italian. Though the “back to Africa” mantra is a laudable one, many have argued that it often serves fascists who don’t want to see black people in Europe. Balotelli is the poster boy of that rickety journey across the Mediterranean that hundreds of thousands of Africans have made to Europe.

Heated racial stuff aside, there is a lot to like or be outraged about Balotelli.

In the time he has been in England the striker has thrown darts at a youth player; he was shown six yellow cards in six games this season; he has accrued parking tickets of £10 000 (an average of three a day); and has wrecked his Audi sports car in an accident.

A few months ago he set fire to his country mansion in a mysterious case that involved launching fireworks after midnight ahead of a derby match against United. As the flames were engulfing his house, Balotelli ran back into the house to fetch wads of cash.

In fact, when you mention Balotelli, it is obligatory to add the word “cash”. After crashing his Audi R8 last year, policemen arrived at the scene of the accident to find him with £5 000 in cash. A cop who couldn’t identify Balotelli as the rich footballer asked him why he was carrying so much cash. Balotelli replied: “Because I am rich.”

A few months ago after a series of misdemeanours, Balotelli promised to straighten up his act. The footballer gave an interview in which he said: “I don’t care what people say about me. I am focused on my football, my manager, girlfriends and my family.”

Ah, Balotelli. One gets the sense that it is not just the football that will be spectacular, it is everything else.