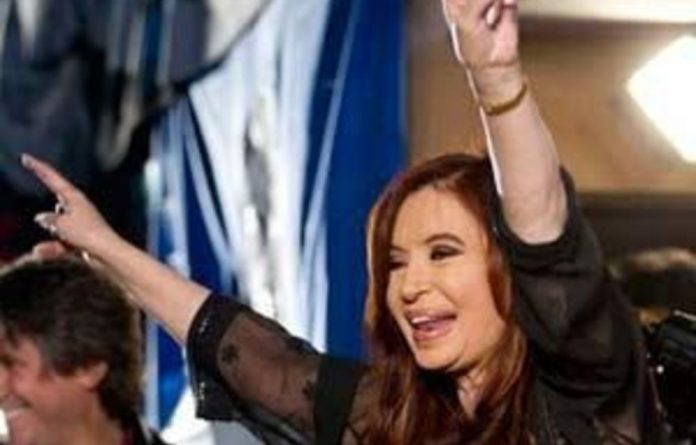 Cristina Fernandez (Kirchner) begins a second four-year term as Argentina’s President on Saturday at the peak of her popularity but with the country’s booming economy shadowed by Europe’s financial crisis. This may force her to tweak the offbeat, high-growth policies that pleased voters but spooked investors.

Fernandez (58) won a landslide re-election on the back of sizzling economic growth and a wave of sympathy following the sudden death in 2010 of her husband and predecessor as president, Nestor Kirchner.

Still in mourning, Fernandez wore black to her swearing-in ceremony and ended the oath of office with a reference to her husband, declaring “May God, country and he hold me to account.”

She received the presidential sash from her daughter Florencia amid cheers and applause in Congress.

Bolster currency reserves
The presidents of Brazil, Uruguay, Chile, Paraguay and Bolivia attended the swearing-in ceremony, along with lawmakers and supporters from her Peronist party.

The party rejects orthodox belt-tightening measures as they ‘stifle growth’, but she has already made several adjustments.

Days after she was re-elected October 23 with over 54% of the vote — a single round landslide that buried her nearest competitors and won her back control of Congress — she ordered energy and mining firms to cash in export revenues on the local foreign exchange market and sent in tax officials to approve dollar purchases on a case-by-case basis.

These measures were designed to counter surging capital flight and bolster the central bank’s foreign currency reserves, which she has earmarked for debt repayments in 2012.

Deeper cuts in public spending — such as further subsidy reductions or caps on wage demands — will likely lead to struggles with the powerful trade union movement that provides the key support for Peronist politicians.

“Our model is a model of growth … we believe in growth, in work and inclusion and we’re going to maintain that path,” the former senator told industry leaders in a recent speech.

Double-digit inflation, capital flight and tight finances are, however, raising concerns about the sustainability of her big-spending policies as a worsening global outlook weighs on grains prices and reduces demand from neighbouring Brazil.

Factory output growth was significantly slower in October, a clear sign that Latin America’s third-biggest economy is cooling down.

She has also started dismantling multibillion-dollar state subsidies on water, natural gas and utility bills, an unresolved legacy of a devastating 2001/02 economic crisis that is an increasing burden on public finances.

Her choice of market-friendly Finance Secretary Hernan Lorenzino as economy minister was well-received by Wall Street, where analysts said it could point to intensified efforts to clear up lingering fallout from the 2002 debt default and return to global markets.

“I don’t see any significant changes. What’s happened so far has been reassuring for those who thought something scary would happen in the second term,” said political analyst Federico Thomsen.

During her stormy first four-year term, Fernandez nationalised private pensions, fought with farmers over export taxes, and ignored international arbitration awards to private firms hurt during a debt default in 2002, which left Argentina virtually frozen out of global credit markets.

Fernandez’s outgoing vice president, Julio Cobos, who refused to step down despite an acrimonious falling out with her, is seen by Fernandez loyalists as a traitor and is being replaced in her second term by current Economy Minister, Amado Boudou. — Sapa-AFP, Reuters.