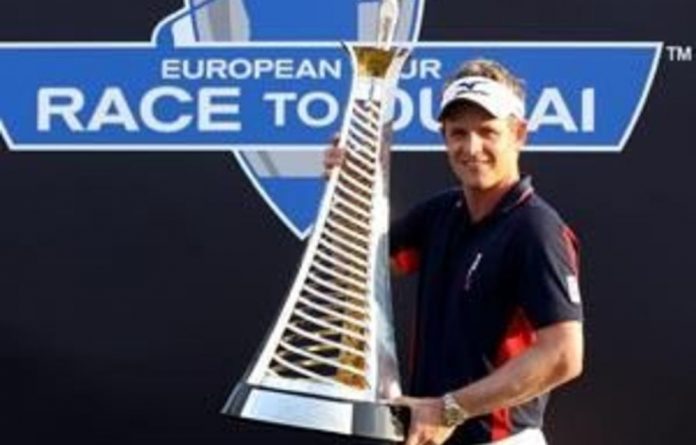 No. 1-ranked Luke Donald made history on Sunday in becoming the first golfer to win both the American and European money titles, shooting a 6-under 66 to finish third at the Dubai World Championship, to see off his nearest rival Rory McIlroy in the Race to Dubai.

The Englishman (34), who won the American title earlier this year, had to finish better than ninth or hope McIlroy didn’t win the tournament.

Donald finished in contention while McIlroy struggled for much of the week, finishing on a 9 under total of 279 in a tie for 11th in the tournament.

“It’s something that I didn’t think was possible,” Donald said. “I played extremely solid, consistent golf all year, winning four times and playing right at the right moments. I think it is testament to my hard work and it’s nice to see it paying off.”

Donald started slowly in Dubai, possibly still showing signs of rust after spending five weeks away from the game for the birth of his second daughter. In his first tournament back, last week’s Nedbank Golf Challenge, Donald finished 10 shots off the pace in a tie for seventh.

‘Exciting way to end’
Donald finished the first day at the Dubai tournament in 26th place, after carding three bogeys on the back nine. But starting with the second round on Friday, he climbed up the leader board. He strung together three birdies in a row on the second day to reach 12th as his short game improved.

Then, he had two stellar rounds of 6-under 66 to challenge for the lead.

“What a three-way finish there and an exciting way for the tournament to end”, Donald said. “I had so many mixed emotions but just tried to finish strong and three birdies was a nice way to finish the year.”

The No. 2-ranked McIlroy had all but conceded the Race to Dubai money title Saturday, after finishing with a 1-under 71. That left the Northern Irishman in a tie for eighth and six shots behind eventual winner Alvaro Quiros of Spain.

He said on Friday that he has been suffering fatigue for the past several weeks from the lingering effects of dengue fever, which he believes he picked up a few weeks earlier in South Korea or China.

“I just couldn’t get anything going when I needed to”, McIlroy said. “I think that I played a nine-hole stretch on Friday night and Saturday morning in 5-over par … If I had played them on even par, I would have been in a great position going into today. I think that is really where the tournament got away from me.” — Sapa-AP