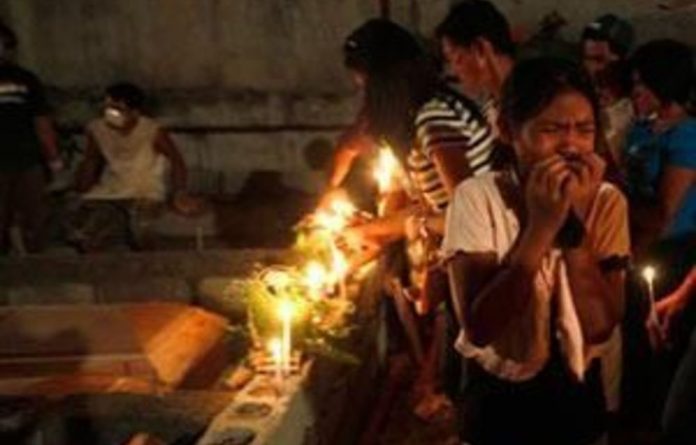 The death toll from killer floods in the Philippines surged by more than 200 on Tuesday, more than a week after the disaster struck with officials expecting more corpses to be found.

The confirmed toll reached 1 453, up sharply from 1 236 the previous day as navy and coastguard ships fished more bodies out of the waters off the southern island of Mindanao, the civil defence office said.

The stench of death pervaded the region, a sign that many corpses still remained unrecovered on land, Ana Caneda, the regional civil defence chief said.

“There are still a lot of areas we have examined that are stinking of dead bodies. We don’t know how many people are buried under that mud,” Caneda said, adding the toll could reach 2 000.

“There are so many bodies being found, floating in the bays. If not for the small islands in the bays, they would be in the Pacific already,” she said.

Recovering the bodies has been hampered by the fatigue of rescue workers who have been labouring non-stop since the storm hit, Caneda added.

Exhausted
“Even the [corpse] sniffing dogs are tired,” she said.

Survivors at a sandbar in Cagayan de Oro city, trying to salvage belongings from the mud, instead dug up the bodies of three of their neighbours, the city government said.

Cagayan de Oro and Iligan and bore the brunt of the disaster, suffering most of the fatalities.

More than 376 000 people were displaced by the storm and almost 55 000 are still huddled in crowded makeshift evacuation centres, the disaster council said.

The government has said it will set up tent cities in safe areas to temporarily house the evacuees — perhaps for as long as three months — until more permanent shelters can be erected.

Health secretary Enrique Ona said the government was also preparing a scheme to pay households unaffected by the flood to host families who had lost their homes.

Ona said there had been no major disease outbreaks at the evacuation centres but potable water remained in short supply for thousands of people.

Disaster victims
Around 50 people left one centre on their own initiative, pitching tents at a nearby car park.

“I decided to leave because of the bad odour and because it is just too crowded in there, especially when we sleep,” said Alan Labiano (43) who was sheltering with his wife and three children.

At night, he said, some people were sleeping on plastic chairs because there was nowhere to lie down.

The government has barred many of the disaster victims from returning to their homes, saying they should not have been allowed to live on such unstable, low-lying land in the first place.

A low pressure area brought new floods to the central and southern Philippines on Monday, forcing thousands more to flee their homes, the disaster council said.

In Valencia City, just 118km southeast of Cagayan de Oro, some 300 families were forced to take refuge on their rooftops due to the floods and had to be rescued by helicopters, a military report said.

The disaster council said an infant was missing after floods hit the port city of Surigao, 120km east of Cagayan de Oro but there were no confirmed fatalities from the latest rains. — AFP

Reliable news coverage is needed more than ever, but trust in the media is at an all-time low
Read more
National