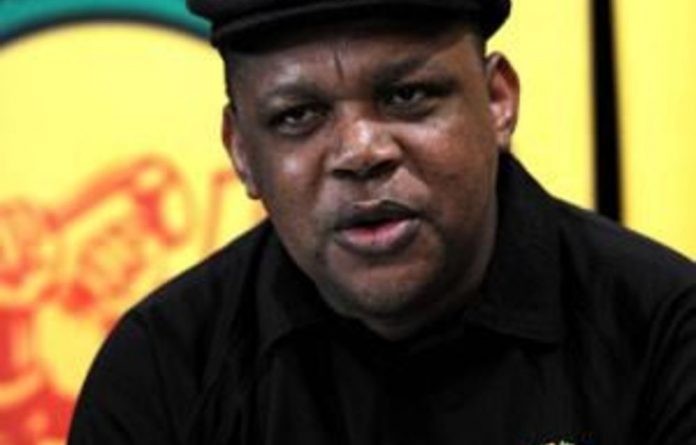 Mabe was paying tribute to Mhlongo as his friend. They had worked together in the youth league since 2008.

Mhlongo, a league NEC and working committee member, died in hospital in Tongaat, KwaZulu-Natal on Christmas Eve, the league announced on Wednesday.

Mabe was constantly disrupted by some people at the funeral during his tribute. He was one of six league leaders, including leader Julius Malema, who were suspended in November for ill-discipline and bringing the ANC into disrepute.

The league’s provincial secretary Sihle Zikalala intervened and appealed to those present to respect the speakers.

“Comrades all those who worked with Mhlongo should be allowed to speak.”

‘Foreign culture’
Zikalala said when Mhlongo differed with other league members he expressed his opinions in appropriate forums.

“We are here to pay respect to Mhlongo. The ANC will be 100 years next year, it has survived because of its values.

“If you are a leader or a member of the ANC you must respect others. The things we are seeing here are foreign to the culture of the ANC.

“If a leader is on stage and has a different view we should give them an opportunity to express themselves.”

He advised people to express their discontent through the right channels.

Suspended youth league deputy president Ronald Lamola was also interrupted during his address. Lamola said Mhlongo was one of those who had helped increase the league’s membership.

‘Intellectual debates’
“He [Mhlongo] was a disciplined member of the [youth league], he contributed to the league hosting the biggest conference in Gallagher Estate and his dedication helped us to grow our membership.”

He was referring to the youth league’s elective conference held in June.

Lamola said Mhlongo understood his responsibility in the league and in his community.

“He attended all deployment with discipline, he loved his people and brought a new life to the organisation. He knew that to capture the youth, you must speak to them in a language they’ll understand,” Mabe said.

“He [Mhlongo] was trained in politics in the early 1990s. He was not confused about what the ANC stood for. I’m confident he was going to grow in the organisation.”

“Mhlongo worked hard in the ANC and did not expect to be paid for his contribution,” she said.

Mhlongo was born on January 18 1973. He died after a short illness on December 24. He is survived by his fiancé and five children.