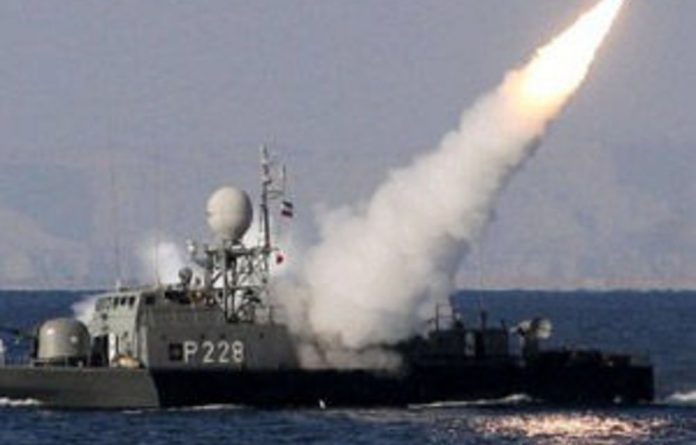 Iran on Monday tested missiles near the Strait of Hormuz, underlining its threats to close the vital oil-transit waterway as the West prepares to impose more economic sanctions.

The launch of two missiles took place on the final day of war games in waters east of the strait at the entrance to the Gulf, a navy spokesperson, Commodore Mahmoud Mousavi, was quoted as saying by official media.

Another missile was also to be tested on Monday, he said.

The longest range of the missiles tested on Monday was some 200km.

On Sunday, a medium-range surface-to-air missile was also test-fired during the exercises, according to Mousavi.

The show of military muscle was designed to show Iran’s ability to close the Strait of Hormuz — through which 20% of the world’s oil flows — if it chooses.

The US, which keeps its Fifth Fleet based in the Gulf, has warned it will not tolerate a closure of the strategic channel.

‘Routine’ passage
Halfway through the 10 days of Iranian navy manoeuvres it sent an aircraft carrier, the USS John C Stennis, through the strait on what the Pentagon said was a “routine” passage.

But Iranian political and military officials insist they could take that drastic step if the West imposes more sanctions on top of others that have already taken their toll on Iran’s oil-dependent economy.

The European Union is considering an embargo on Iranian oil imports. A meeting of EU foreign ministers at the end of this month will decide whether to implement that measure to punish Tehran for its controversial nuclear work.

As an additional show of defiance, Iran on Sunday said its scientists had tested “the first nuclear rod produced from uranium ore deposits inside the country”.

Iran’s atomic energy organisation, which announced the news, did not specify the level of enrichment used in the trial fuel rod.

Impact of sanctions
Following the adoption of the fresh US sanctions, Iranian President Mahmoud Ahmadinejad on Sunday told senior officials in his country’s central bank that the institution would confront the new US sanctions with “strength”.

He also said that “currently there is no particular problem in the economic sector”.

Iran’s currency, though, was showing the impact of the sanctions, diving to a record low against the dollar.

On Monday, the Iranian rial was sliding deeper, trading at 16 800 to the dollar. The currency has lost 53% of its value over the past year.

The new US sanctions seek to further squeeze Iran’s crucial oil revenues, most of which are processed by the central bank.

Iranian officials have started admitting the sanctions were hurting their economy.

But their threat to close the Strait of Hormuz if the sanctions worsened has left analysts sceptical.

Some noted that Iran would devastate its own economy if it did so, likely lose the diplomatic protection it enjoys from Russia and China, and risk open war with the US.

Continued tests
Monday’s missile tests, however, renewed concerns over what Iran might do if it felt cornered.

Mousavi said a Qader ground-to-ship cruise missile and a shorter-range Nasr surface-to-surface missile were launched in the tests.

The Qader cruise missile “built by Iranian experts successfully hit its target and destroyed it,” Mousavi was quoted as saying by the IRNA news agency.

He said it was “the first time” a Qader missile had been tested.

Hours later a Nasr missile “was also fired from a vessel in the sea today,” he told state television, adding that its test, too, was successful.

The Qader missile is said to have a range of 200km, which is generally considered medium-range or even short-range for a cruise missile, even though IRNA described it as “long-range”.

The Nasr is based on a Chinese design, as is the other missile to be tested on Monday, the Nour.