Drowning in a sea of waste 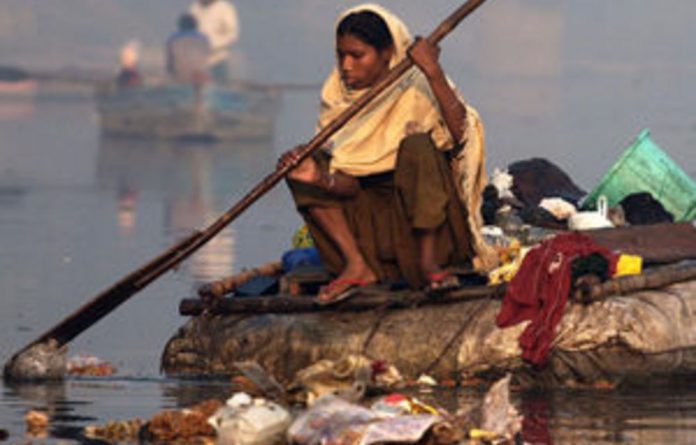 Five hundred tonnes of Christmas tree lights and at least 25-million bags of plastic sweet wrappers, turkey coverings, drinks bottles and broken toys were to be thrown away by British homes this Christmas and New Year. But only a tiny proportion of this festive plastic waste was expected to be recycled.

Most of the year only a little under a quarter of the United Kingdom’s plastic waste is recycled, but over the festive period even more escapes the dump, according to a survey by home drinks-makers SodaStream. Globally, the recycling of plastics is even smaller.

South Africa recycles about 17% of plastic, 69% of steel beverage cans, 59% of paper and about 25% of glass, according to data from various local recycling initiatives. There is a belief that planet Earth is being slowly strangled by impermeable plastic waste that collects in great floating islands in the world’s oceans, clogs up canals and rivers and is swallowed by animals, birds and sea creatures.

In many parts of the developing world waste acts as a near ubiquitous outdoor decoration — along roads in India, around cities and villages in Africa and fluttering off fences across Latin America. And when it is not piling up, it is often burned in the open, releasing noxious smoke into the surrounding area.

From the central parks of Moscow after the spring thaw, strewn with plastic uncovered by the melting snows, to some of the most remote places on Earth — the summit of Mount Everest or the Tibetan Plateau — nowhere, it seems, is free of discarded bags, bottles, unwanted toys, used toothbrushes and lost beach shoes.

There are no global figures on the true scale of the problem but, according to the European Packaging and Films Association, 265-million tonnes of plastic are produced globally each year.

In the UK at least two-thirds of this is for packaging, which globally would translate to 170-milion tonnes of plastic largely created to be disposed of after one use. Even at the almost unmatched European Union recycling rate of 33%, two-thirds of that, or more than 113-million tonnes, would end up in landfill, being burned, or cluttering up the environment in which people and wildlife live.

Such a figure — almost certainly a huge underestimate and excluding more “permanent” items from car parts to Barbie dolls — would be more than enough to cover the 48 contiguous states of the United States in plastic food wrapping. If the world recycled packaging at the rate the US does, 15%, it would generate more than enough plastic to cover China in plastic wrap every year.

What would this world look like without plastic? Last year Austrian-based environmental consultancy Denkstatt imagined such a world: a world in which farmers, retailers and consumers use wood, metal tins, glass bottles and jars and cardboard to cover their goods. It found the mass of packaging would increase by 3.6 times, it would take more than double the energy to make and the greenhouse gases generated would be 2.7 times higher.

To understand this, consider the properties of plastic that make it so attractive to use: it is durable, it is flexible and it does not shatter, it can breathe — or not — and it is extremely lightweight. As a result, food and drink are protected from damage and kept for lengths of time previously unimaginable.

The Packaging and Films Association said average spoilage of food between harvest and table is 3% in the developed world compared with 50% in developing countries where plastic pallets, crates, trays, film and bags are not so prolific.

Once the food reaches people’s homes its lifespan is increased — in the case of a shrink-wrapped cucumber from two days to 14 days. A less obvious benefit of plastic packaging is that by being much lighter than alternatives it greatly reduces the fuel needed to transport the goods.

Because of the huge carbon content of our diets, it is estimated that for every tonne of carbon produced by making plastic, five tonnes is saved, said Barry Turner of the packaging association.

A more surprising point is made by Friends of the Earth’s waste campaigner Julian Kirby, who said that because it is inert in landfill, plastic waste buried in the ground is a counterintuitive way of “sequestering” carbon and so avoiding it adding to global warming and climate change.

This focus on carbon and climate change, however, ignores the very reason why plastic bags, and plastic packaging generally, first gripped the public imagination — namely that it is such a highly visible result of our throwaway society.

Many “ethical” products — from sandwich bags to nappy bags — have switched to biodegradable plastics, made either from natural products such as cornstarch or by using a special additive that helps break down the plastic. However, Turner suggested this will remain a niche, because the process is expensive and — in his words — is “destroying” a resource that could be recycled.

Recycling plastic is particularly difficult, because there are so many types and because plastic melts below the boiling point of water, making it hard to remove contamination.

Increasing recycling is one of the two key areas focused on by the plastics industry, which estimates that if every council in the UK operated at the rates achieved by the best local authority for each type of plastic — polyethylene terephthalate (PET) bottles, cartons, trays, bags and so on — the country could raise total plastic recycling from 23% to 45%.

To meet the industry’s self-imposed target of zero plastic waste to landfill by 2020, however, it is largely looking to incineration, which is highly controversial with environment groups and local communities, which worry about how waste ash is disposed of and breathing in emissions from the plants — despite the UK’s Health Protection Agency giving modern plants the go-ahead as not being damaging to health.

Greenhouse gas emissions from such plants are high: equivalent to 540g of carbon dioxide per kilowatt hour, more than 100 times that of nuclear. Instead, environment and wildlife campaigners want far more attention to the “waste hierarchy” — reduce, reuse, recycle.

The British government has proposed increasing all recycling targets and raising plastics to 50%. If enforced, this should encourage innovation, such as more food recycling, which research suggests reduces overpurchasing and therefore the need for packaging, and the use of a recent development of a new dye for black plastic bags that can be detected by automatic sorting machines.

Further afield, 47 industry groups from around the world have joined forces to fund research and schemes to stop plastic from getting into the seas and oceans.

While on land, countries without plastic recovery regulations could adopt a system used in several European countries, such as Belgium, where manufacturers are responsible for recovering a percentage of the plastic they produce. “The idea of producer responsibility is one that people are most agreed on, but no one’s sure how,” said Kirby. —