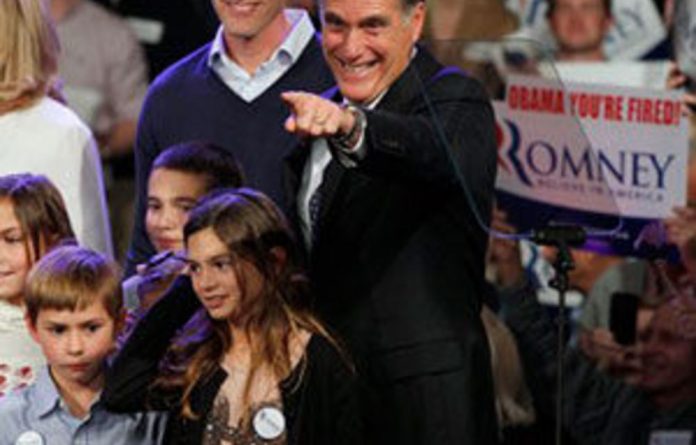 Europeans awoke on Wednesday to find themselves plunged into the middle of the US presidential race after a Republican frontrunner accused US President Barack Obama of cosying up to Europe while ignoring basic American values.

Mitt Romney, the former Massachusetts governor who served as a missionary in France and recently toured Europe, said Obama is determined to impose a Euro-style welfare state on the US at the expense of free enterprise.

“He wants to turn America into a European-style entitlement society,” he said in his victory speech after winning the New Hampshire primary. “We want to ensure that we remain a free and prosperous land of opportunity. This president takes his inspiration from the capitals of Europe; we look to the cities and small towns of America.”

Romney’s rhetorical attack — on Obama, and on Europe — made clear that he’s running for president of the United States in part by running against European values.

European analysts with experience tracking the interplay between Europe and the United States say this tactic has been tried before, but may be effective at a time when many American voters know Europe is gripped by a financial crisis with frightening global overtones.

Rosemary Hollis, director of the Olive Tree Scholarship programme at London’s City University, said Romney may succeed in putting Obama on the defensive, putting Obama in the awkward position of either defending Europe’s social systems or letting the attacks go unanswered.

“Associating Obama with Europe links him to the current malaise in Europe, and Americans know it’s a basket case,” she said. “It plays to the stereotypical notion that the USA has about Europe, that they are freeloaders, with no defence capability, and live on welfare benefits.”

‘The enemy’
Hollis said Romney is “relying on a history of socialism being viewed as the enemy”.

The anti-European vitriol came not just from Romney, but from all the Republican candidates, said Willem Post, an American politics expert with the Dutch Clingendael Institute of International Relations who returned from New Hampshire on Wednesday.

“It is turning into something dangerous,” he said. “The way ‘socialism’ is used is totally out of place and wrong. Now in Europe, you see a decline of the welfare state and increased privatisation, so it is factually wrong.”

He was also in New Hampshire eight years ago, when anti-Europe sentiment centred on the Iraq war and France’s opposition to the US.

“At the time there was a specific reason for Euro-bashing,” he said. “Now it is woven into the campaign of every [Republican] presidential candidate. One remark isn’t that bad, but now there was something fundamental about the Euro-bashing.”

Despite Romney’s harsh words, he has in the past spoken highly of his experiences in Europe. More than four decades ago, during his college career, Romney spent more than two years as a Mormon missionary in France, where he was involved in a car accident that wasn’t his fault and left one of his passengers dead.

During the campaign, Romney has reminisced about living in France on $500 to $600 a month. When asked last month about a formative experience in his life, he spoke about living with people who “lived very modestly” in France.

But those nostalgic memories has not prevented him from trying to use Europe’s perceived weakness as a campaign weapon.

‘Europeanisation of America’
Dominique Moisi, a senior adviser at the French Institute of International Relations in Paris, said Romney’s hostile comments are a political tactic that would not be taken too seriously in Europe.

“This is nothing new. This was the Republican line back when Kerry was running — and it’s continuing,” said Moisi, referring to the 2004 presidential campaign of Senator John Kerry. “The ‘Europeanisation of America’ has been a slogan for a while.”

Moisi said such political bluster would have little impact on Romney’s policies if he is eventually elected president.

“Once he is president of the United States, he has to rule, so to speak, with Europe, and America can’t afford to lose Europe as China rises. It’s a campaign trick — very illustrative of the campaign mind of the Republicans,” he said.

In Nordic countries that have maintained a system of high taxes and extensive welfare benefits without sacrificing economic competitiveness, Romney’s views were seen by some as ill-informed.

Professor Stein Kuhnle of the University of Bergen, Norway, who researches the welfare state, laughed when he heard Romney’s comments.

“It’s amazing that this kind of rhetoric works,” he said. “But I think it plays on ignorance to some extent. Most American voters don’t know very much about Europe.”

“Maybe we should hold a class for American politicians,” he said. — Sapa-AP