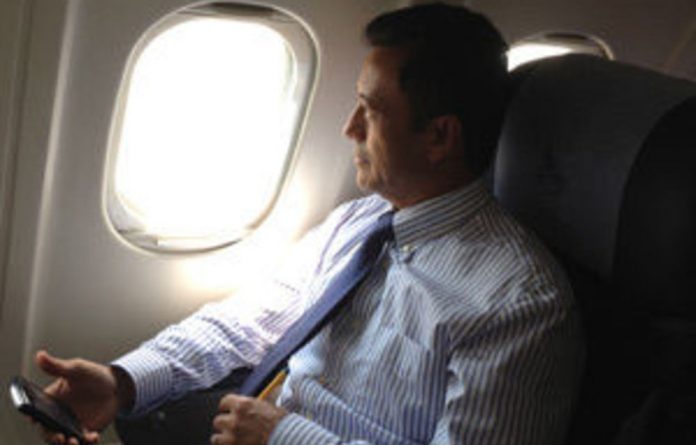 An attempt by Madagascar’s toppled president to end his exile in South Africa was thwarted in the air on Saturday when his plane was forced to turn back after authorities from the Indian Ocean island closed their airspace to prevent his return, his spokesperson said.

The commercial plane carrying Marc Ravalomanana landed back in Johannesburg just after 2pm, about the time it had been expected to reach Madagascar’s capital. Reporters on board said it did not stop to refuel in Mozambique, as Peter Mann, a spokesperson for Ravalomanana, had said airline officials initially planned to do.

Ravalomanana has been exiled in South Africa since being toppled in 2009. When he tried to return last year, he was stopped at the Johannesburg airport after aviation authorities in Madagascar wrote to say he was not welcome.

In Madagascar, where thousands of Ravalomanana supporters had awaited him at the capital’s airport, a government minister told reporters that the populist former disc jockey who toppled Ravalomanana, Andry Rajoelina, had issued a notice closing the country’s main airports to prevent the former leader’s return.

Earlier on Saturday, Ravalomanana, his wife, two aides, journalists and passengers not linked to him had boarded a commercial flight operated by South African Airlink, a regional partner of South African Airways, in Johannesburg. Ravalomanana said he wanted to return to work for peace and democracy in his troubled homeland.

‘Current contextual challenges’
Saturday’s events illustrate how far Madagascar has to go to return to stability, and are just one of a series of setbacks that have frustrated mediators, despite signs of progress.

Security officials in Madagascar had said the toppled president would be arrested if he returned. Ravalomanana said arresting him would be unlawful and would destabilise Madagascar at a delicate time in efforts to restore democracy.

Following Rajoelina’s military-backed coup, Ravalomanana was convicted in absentia of conspiracy to commit murder in a case related to the turmoil during the overthrow that forced him to leave. Ravalomanana called the tribunal appointed by Rajoelina illegitimate.

Late Friday, South Africa’s deputy foreign minister, Marius Fransman, who has led regional efforts to restore democracy in Madagascar, issued what could be read as a warning to Ravalomanana not to return, or to Rajoelina not to seek his rival’s arrest.

Fransman noted “the current contextual challenges relating to the political situation in Madagascar”, but did not elaborate. Then he said he was calling “on all the political formulations and the political leadership, in particular … Andry Rajoelina and former President … Marc Ravalomanana to exercise political maturity.”

‘We are mature’
Asked at the Johannesburg airport about Fransman’s comments, Ravalomanana said, “We are mature.”

Ravalomanana has accepted a plan negotiated by Fransman that calls for elections next year overseen by a unity government. The unity government is in place, with Rajoelina as its president, but members are bickering over how positions were filled.

On Friday, Ravalomanana told reporters he would work with anyone, including Rajoelina, to “build a new Madagascar.” But he acknowledged Rajoelina has rebuffed his overtures.

The Ravalomanana-Rajoelina rivalry is a particularly bitter example of a series of confrontations between strong men vying for power in Madagascar since independence from France in 1960. The political influence of the security forces is strong.

For months before the coup, Rajoelina led rallies against Ravalomanana, whom he accused of being out of touch with the sufferings of the country’s impoverished majority.

‘Genuine dialogue’
Ravalomanana’s government at one point blocked the signal of a radio station Rajoelina owned. In response, Rajoelina supporters set fire to a building in the government broadcasting complex as well as an oil depot, a shopping mall and a private TV station linked to Ravalomanana. Scores of people were killed.

Days later, soldiers opened fire on anti-government protesters, killing at least 25. The incident cost Ravalomanana much of the support of the military, which blamed him for the order to fire at demonstrators.

On Friday, Ravalomanana told reporters he had nothing to do with orders to close the radio station or fire on demonstrators. Ravalomanana added that if he were to regain power, he would put into practice what he said he had learned during exile in South Africa about respecting the rule of law and freedom of expression. South Africa saw brutal white minority rule peacefully toppled in 1994 and multiracial democracy installed through negotiations and power-sharing.

“We cannot solve this crisis in Madagascar without genuine dialogue,” Ravalomanana said. –Sapa-AP

ANC is playing it safe in the Western Cape