Police called in to cope with rioting miners 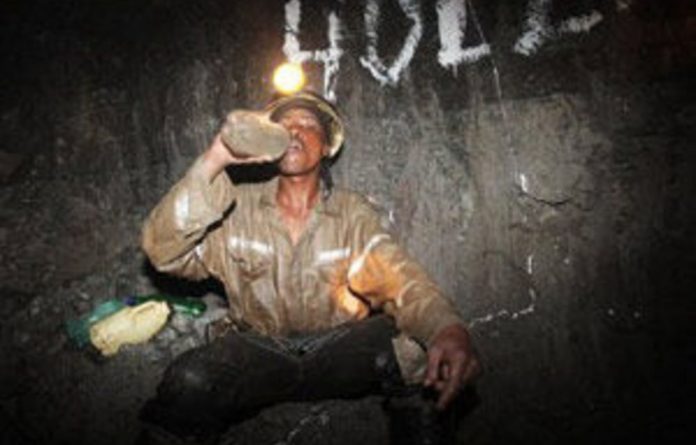 Riot police fired tear gas, rubber bullets and water cannon on Thursday at hundreds of striking miners who went on the rampage at Impala Platinum’s Rustenburg plant — the world’s single biggest platinum mine.

At least 50 officers, backed by armoured vehicles and two helicopters, moved into a shanty town near the mine after the miners torched homes in a dramatic escalation of a month-long strike that has hit the company and global platinum prices.

Police said one man had been killed overnight after a mob stripped him naked and beat him during a demonstration outside the plant, which accounts for as much as 15% of world platinum output.

Up to 5 000 miners blocked the road leading to the plant, which lies 120km northwest of Johannesburg, and hurled stones at police, provincial police spokesperson Adele Myburg said.

“This morning they regrouped, started intimidating people who wanted to go to the mine. There were people assaulted, vehicles were stoned,” she said, adding that one female police officer had been injured by flying stones.

“The road was barricaded, vehicles travelling on that road were stoned, private vehicles as well as heavy-armed policed vehicles.”

Production at Rustenburg, which accounts for 60% of Implat’s output, came to a halt a month ago after the company sacked 17 000 employees following a January 12 wildcat strike over bonuses.

Since then, the price of platinum, a key ingredient in catalytic converters in cars, has climbed 7%, in part because of fears about supply disruptions. South Africa is home to 80% of global platinum reserves.

At a results conference in Johannesburg on Thursday, Implats bosses said the firm had lost R1.2-billion in revenue and warned that total output and earnings for the remainder for the financial year would also take a hit.

Chief executive David Brown told reporters the company had re-hired 6 000 of the dismissed workers but added that he had no idea when work at the mine would resume. The 35-day strike is costing the company an average of 3 000 ounces a day.

“If workers don’t come back to work, we’ll have to hire new people. It’ll take two to four weeks to get back to operational normality,” Brown said.

Costly strikes
Putting up with lengthy and often costly strikes is familiar terrain for investors in South Africa, home to some of the world’s deepest and most dangerous mines.

Miners are increasingly looking for better pay in return for the hazardous jobs and the government is pushing for an industry-wide improvement in safety.

“The government is quite correctly very concerned around safety issues and until those issues get fixed it is going to cost these guys a lot of money,” said Nic Norman-Smith, a portfolio manager at Lentus Asset Management in Johannesburg.

Shares of Implats tumbled 3.1% to R159,69, the worst performers in Johannesburg’s benchmark Top 40.

Implats said it had lost an additional 33 000 ounces in the final four months of 2011 from government-ordered safety stops. Some industry executives have criticised the safety push as too restrictive. — Reuters