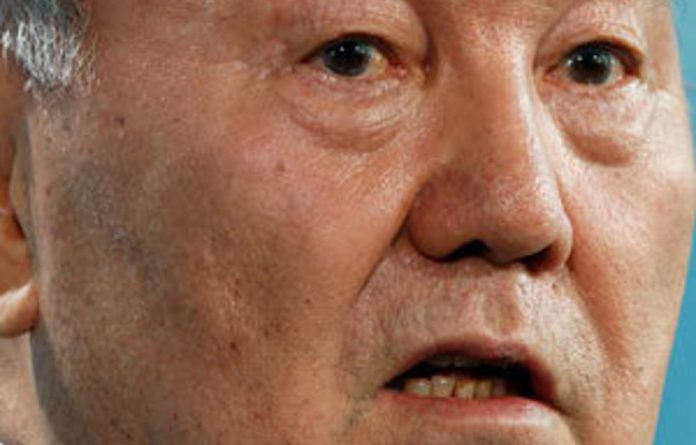 Nearly 1 000 protesters had gathered on the main Palace of the Republic square in the financial capital of Almaty to express outrage at the energy-rich state’s rights record under the veteran leader.

Police raided the homes of three top members of the unregistered Azat Freedom Party before the event began and hauled them off to a central police station for questioning, a party spokesperson said.

Those detained included Azat co-chairpersons Bolat Abilov and Zharmakhan Tuyakbay, who once served as speaker of the Central Asian nation’s parliament, and the group’s general secretary Amirzhan Kosanov.

They were later charged with organising an unsanctioned rally and were due to be sentenced to prison terms later in the afternoon, the party said.

Square cordoned off
Police also arrested several protesters who tried to make anti-Nazarbayev speeches before moving back and cordoning off the square instead, their 3 000-strong force backed up by crack riot offers.

“Freedom to Kazakhstan! Freedom to [Igor] Vinyavsky! Freedom to [Vladimir] Kozlov!” the crowd chanted in reference to a top opposition member and an independent newspaper editor whose jailing in January drew Western concern.

They later demanded a march on the police station where the Azat leaders were being held, but the call was muted by the overwhelming security presence that choked off the city square.

“The people are outraged and unhappy with Nazarbayev’s leadership,” said Rysbek Sarsenbayuly, a newspaper editor whose brother was killed in 2006 while speaking out against Nazarbayev’s rule.

He said the next rally would be held on the same square on March 24 to mark the 100-day anniversary of oil district riots that left 16 dead and have become the rallying call for those unhappy with Nazarbayev’s rule.

List of charges
Abilov had already been jailed for 18 days for helping organise a similar unsanctioned event held on January 28 to protest the outcome of parliamentary elections in which the opposition won no seats.

Saturday’s event saw protesters read out a full list of charges against Nazarbayev, from ordering the police to shoot on demonstrators in December’s riots to falsifying elections and then ordering a new security clampdown.

The outbreak of protests and accompanying social tensions are a worrying sign for Central Asia’s largest economy, which has been a magnet for foreign investors and the volatile region’s most stable state.

The president defended his human rights record earlier this month while paying a visit to Germany, where he underwent what his office called a ‘planned medical check-up’ last year.

“I am of the opinion that what we have achieved is already a lot,” he told reporters after talks with German Chancellor Angela Merkel. –AFP