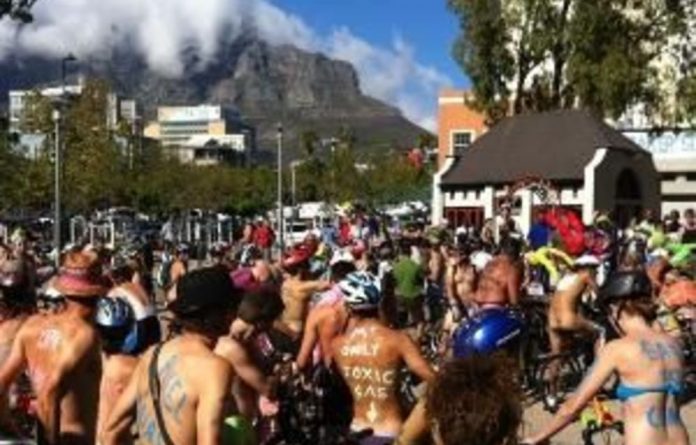 It’s the morning before the Cape Argus Pick n Pay cycle tour 2012. The wind is pumping and trees bend in the breeze. About 100 people are milling around the Prestwich Memorial with their bicycles and helmets. Table Mountain carries a thick cloud and the cable car is almost completely obscured. It’s a bit of a chilly morning to have no clothes on.

Zoe Duby, the organiser of the Cape Town leg of the World Naked Bike Ride, is painted from head to toe in luminous body paint and has a cycling helmet to which is attached pink stockings filled with balloons. She’s wearing a bikini, and holding an enormous loud hailer. As she turns it on, the crowd of cyclists slowly begin to remove their pants, bikini tops and shirts. All are here with something to say, and not just to get a tan on their (usually) pale parts.

Duby tells the crowd that the world has a dangerous dependence on cars. In Cape Town, “we have one of the highest carbon emissions per capita rating, which is really embarrassing”.

She says the ride — a loop around the Sea Point library and up Long Street — hopes to raise awareness about carbon emissions, as well as encouraging the City of Cape Town to create more safe cycle routes.

Duby reminds the cyclists that public nudity is a crime and that if the riders choose to go naked, that’s their responsibility. The crowd laughs, and more clothes come off. Why naked? “We should be ashamed of our carbon emissions and not of our bodies,” she explains.

Smiles break out as people of all shapes and sizes glance around at one another. A sign on someone’s back reads “bare to change”.

Koeberg — 30km away from Cape Town — is the site of the only nuclear power plant in Africa but the South African government plans to build six new reactors.

The wind is blowing everyone’s breasts and bits around in the sunshine. Beneath a sign reading “It’s beautiful here”, three young men in gold Speedos nod their heads. But the crowd isn’t all young. A number of older men and women express their disdain about the way we’re treating our planet and its resources.

Duby calls the crowd to attention, and to the sound of a vuvuzela, the crowd rides off towards Sea Point.

Cyclist John Thompson displays his bike proudly. Attached to the front, a sign reads “Burn fat, not oil”, while one on the left reads “Ride, don’t drive”. Another on the right reads: “Please don’t frack up the Karoo”. It’s clear that this isn’t simply an exercise in exhibitionism.