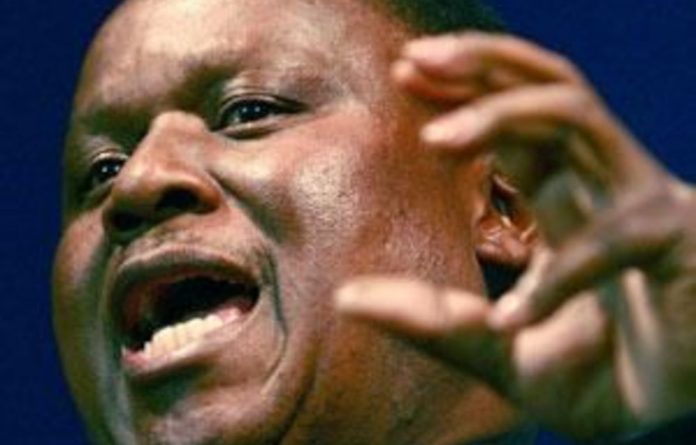 Former director general in the presidency Frank Chikane has written a book called Eight Days in September: the removal of Thabo Mbeki, which chronicles the last days leading to former president Mbeki’s resignation on September 21 in 2008. Rapule Tabane spoke to Reverend Chikane about what writing the book meant for him.

What made you decide to write the book?
Firstly, I had decided long ago that when I left government I would record my experiences and I thought that as I had worked as a director general, the book would be useful for academic purposes in the field in public management. We don’t have a lot of material in this regard. I had decided long before Polokwane but that I would leave government, but they pleaded with me to stay and I had agreed. However, two months before my contract was due to expire, Thabo Mbeki was recalled as president.

I also felt strongly that it was time we stopped the habit of people coming from Europe to interview us and write stories about us. They often refer to us as primary sources and I felt the primary source must now write. I had first talked to president Mbeki about the book, then to president Kgalema Motlanthe then president Zuma, who all welcomed it. I started writing the book three months after I left government.

Did you develop the idea after writing the Chikane Files for Independent Newspapers?
No. I signed the contract with Independent newspapers long before I left government because I wanted to develop something with a newspaper first, because in South Africa not a lot of people read books so I wanted to publish in a newspaper.

Did you have any doubts or hesitation about writing the book, given the criticism from the ANC secretary general after publication of the Chikane files.
You see, after their statement I arranged to meet ANC officials because I did not understand the basis of their statement. Four of the top six officials were present at the meeting. We discussed and they were going to go back to the national executive committee to offer my explanation. I do not know if they have done that because they have not come back to me. We agreed that ANC members have a right to express their views.

Did you seek president Mbeki’s permission before?
No, I did not ask for his permission and I did not interview him. And he agreed that I did not need his permission. He only saw the book for the first time last Sunday. The book is my work.

Do you think anything can be done to reverse what happened in those eight days when Mbeki got fired … or to make up for it?
There is no way you can reverse it. But what you can learn from the experience is about the culture that is developing in our political space. The Nicholson judgment was used to fire Mbeki but when his judgment was overturned you could not bring him back. For me it’s about the culture; the way people dealt with the democratic state. I believe in the integrity of the state; there should be no confusion between the party and the state.

You can’t use organs of state to sort out your party matters. It’s worse when a faction uses government to fight factional battles. Once that happens, the future of the country is at stake: there could be coups, wars or violence. We can’t reverse what happened but we can learn from it. We should learn that you can’t use the national intelligence agency of the country to deal with factional issues. That you can’t use corrupt means to get into power. It is a dangerous thing because once you corrupt me, you can’t tell me not to be corrupt when I am in power.

There is also a perception that in your book you sympathise greatly with president Thabo Mbeki because you were close to him.
People who have not read my book will make such comments because they already have those views a priori. Who should write a book like this other than one who worked within the system? I was secretary of Cabinet. I was DG in the presidency. I saw all of it, so why would I want somebody to interview me and write the book? The fact that I worked with Mbeki does not mean I cannot have an opinion.

The last chapter of the book deals with how I came to know Mbeki and it shows that it was strictly work related. There was no factional choice to work with him. I knew him before there were any factions. I have kept my integrity. Even when they were [drawing factional lines ahead of] Polokwane I told them it was wrong. When we use lists, we fragment the organisation and weaken it. Now, in his last report, the secretary general of the ANC agrees with me.

For me, Polokwane was extraordinary. People voted for a list, regardless of the individual merits. When they voted against Joel Netshitenzhe [as ANC chairperson] I felt then that the system had been corrupted.

In the their criticism of you, the ANC said sometimes you wrote about meetings you did not attend.
But you must ask the ANC about the outcome of our meeting last year. You must ask them about the portion of my articles where I wrote about meetings I did not attend. But even if I was not at a meeting but it affected my work in government I can write about it. I do not have to be in a meeting to know a decision that was made because it is openly communicated. The point is if a decision affects my work in government why would I not write about it?

Did writing the Chikane Files and this book affect your job prospects in government?
Unfortunately, I do not want to go back and work in government but in the book I write about the fact that we have reached a point where if you don’t belong to a particular faction you don’t get a job or appointed to boards of either parastatals or private companies.

I do say writing the book has cost me dearly. And I am not talking about government work, but work in the private sector. It appears I have been declared persona non grata. You guys must ask yourself how is it possible that a person with so much experience in administration and running institutions cannot be appointed to one board or a parastatal or a board of a company? But that has been the case for the past three years.

People have said to me: “You were bold to write the book.” But I felt if I did not share the story and people died later, I would be guilty to my grave.

Organ recipients are at greater risk of death from Covid-19, while waiting lists for transplants grow
Politics

Zuma tries to turn his courtroom attack on Downer into...

Jacob Zuma has laid charges claiming that Billy Downer, and the NPA, have irredeemably tainted the arms deal corruption charges that have haunted him since 2005
Advertising