Ready for the big time: Motlanthe squares up to Zuma 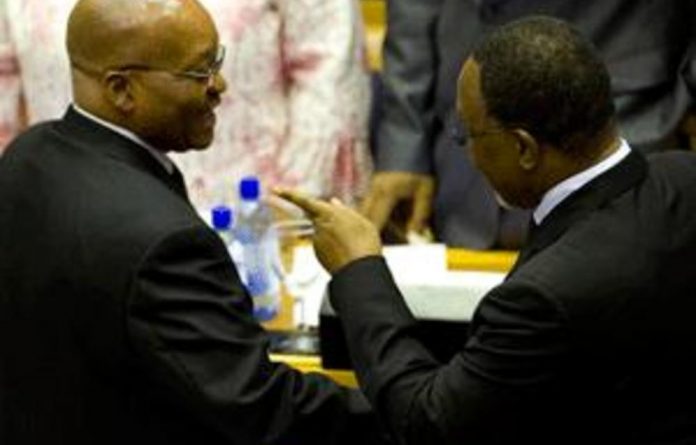 Deputy President Kgalema Motlanthe is more than ready to take on President Jacob Zuma for the ANC’s top position in Mangaung in December, his close allies said this week.

Motlanthe, who was initially reluctant to challenge Zuma, has now told his comrades in the ANC and government that he is interested in the position.

But he is respecting the ANC’s moratorium on the succession debate until nominations open in October and has not made his intentions public. However, his actions in recent months have also shown that he is prepared to make himself available for election.

Party and government leaders close to Motlanthe cited his swift reaction to corruption allegations levelled against his partner Gugu Mtshali at the weekend as the clearest indication yet that Motlanthe was ready to challenge Zuma. On Monday, Motlanthe asked the public protector, Thuli Madonsela, to investigate the alleged bribery scandal implicating him and Mtshali.

According to the Sunday Times, Mtshali allegedly attempted to solicit a R104-million bribe to obtain government support for a South African company trying to clinch a R2-billion sanctions-busting deal with Iran.

Last year Motlanthe was cleared in the Donen report of any wrong­doing in the Iraqi oil-for-food scandal, which initially implicated him and other ANC leaders. Although Donen was unable to find a clear violation of the law, partly because of the limited terms of his investigation, he identified many problems.

Motlanthe’s followers believe the allegations could be an attempt to dent his credibility before the ANC’s elective conference.

Motlanthe, addressing the Limpopo ANC conference in Decem­ber last year, said that contests in the ANC were not between individuals per se because the “structure” nominated candidates.

“Contests happen if structures nominate more than one [person]. There is nothing wrong with that as it enriches the movement. You are able to select from the available delegates and allow people to vote,” he said.

Motlanthe was echoing former president Nelson Mandela who told ANC members at the Mafikeng elective conference in 1997 that no ANC leader should be elected without a contest, otherwise there could be dictatorship.

The battle for leadership positions in the ANC has divided the tripartite alliance, with the ANC Youth League and the remaining supporters of former president Thabo Mbeki seemingly teaming up to topple Zuma. This week, Mbeki supporters criticised Zuma’s leadership, with Mbeki’s former director general, Frank Chikane, leading the charge.

Chikane, at the launch of his book this week, which was attended by almost the entire leadership of the youth league, said South Africans should refuse to be led by corrupt leaders and bemoaned the pervasive atmosphere of fear under the current administration.

The apparent strategy of the anti-Zuma group is to increase the numbers of provincial delegations to the conference by wooing disgruntled Mbeki supporters.

Mbeki received 43% of the votes at the Polokwane conference in 2007.

Zuma will be counting on his home province of KwaZulu-Natal, which will be bringing 25% of voting delegates to the conference, to win a second term.

The balance of forces in four ANC-dominated provinces that will be hosting provincial and regional conferences soon is as follows:

Eastern Cape
In two of the 11 regional conferences that have taken place, the anti-Zuma faction appears to be in control. Leaders pushing for his removal have been elected in two of the biggest regions in the province. They are Sandile Sello and Zukisa Faku, who were elected as the chairpersons of Alfred Nzo and Buffalo City regions respectively and are known to be opposed to a pro-Zuma lobby group, made up mainly from the ANC’s provincial executive committee.

The victories have buoyed the anti-Zuma lobby, which is hoping it will also do well in the OR Tambo, Amathole and Nelson Mandela Bay region elective conferences in April.

ANC secretary general Gwede Mantashe is from the Eastern Cape and it is expected that his role will be key to rallying the province behind Zuma.

But a regional leader from OR Tambo said many people in the Eastern Cape were disappointed in Zuma’s performance, both as the ANC and the government leader. He said the province was one of the first to support Zuma in 2007.

“This is where Zuma got a home. I was one of the people driving his campaign. It was difficult. We tried to make ordinary people understand why we supported him then. Even a cleaner would ask about Zuma. But things have changed now.”

KwaZulu-Natal
The majority of regional leaders in KwaZulu-Natal have reached a compromise on the leadership question in the province, effectively paving the way for premier Zweli Mkhize to be re-elected as provincial chairperson at its conference in May.

This move has also strengthened Zuma’s position because the province has decided to vote as a bloc for his re-election at the national conference.

Last year, shortly after Mkhize was identified as one of the alleged ringleaders who met secretly in Estcourt with, among others, Human Settlements Minister Tokyo Sexwale, Arts and Culture Minister Paul Mashatile and expelled youth league president Julius Malema to discuss how to oust Zuma from power, ANC branches in the province debated the idea of replacing Mkhize with the MEC for education Senzo Mchunu as provincial chairperson.

But Mkhize has since distanced himself from the so-called Mvela group, who want Motlanthe to replace Zuma at Mangaung.

According to several regional leaders Mkhize would be re-elected unopposed. But, after Mangaung, the province would push for Mkhize to get a Cabinet post and for Mchunu to be KwaZulu-Natal premier.

The deal is seen a compromise and was developed largely by ANC leaders from the province’s two biggest regions, Ethekwini and the North Coast, also known as the Musa Dladla region. Some of the ANC leaders from the region include Zuma himself, Mchunu, Police Minister Nathi Mthethwa and Labour Minister Mildred Olifant.

“We are not sources. We are revolutionaries,” said Zikalala.

Mpumalanga
Mpumalanga Premier David Mabuza, who is also ANC provincial chairperson, made the first move this week in the run-up to the party’s provincial conference next month by allegedly engineering the removal of Gert Sibande executive mayor Kgotso Motloung.

Motloung, who is also the provincial chairperson of the youth league, is a close ally of Malema.

In recent months, Motloung made it clear that the league would not support Mabuza’s re-election because of the deep divisions in the party, widespread corruption in government and poor service delivery in the province since he took over in August 2008.

Last year, a few months before the league’s elective conference at the Gallagher Estate in Midrand, Motloung also defied instructions by Mabuza not to back Malema for the presidency.

On Thursday the youth league reacted angrily to Motloung’s dismissal.

Motloung and some Cosatu and South African Communist Party leaders want to replace Mabuza with Clifford Mkasi, the provincial ANC treasurer and the MEC for public works, roads and transport.

If Mkasi is elected chairperson at the provincial conference in two weeks’ time, Zuma’s support in the province could be weakened. With Mkasi as chairperson, Mpumalanga would definitely back Motlanthe.

On the other hand, Mabuza’s re-election would be a major boost for Zuma’s bid for a second term. Mabuza won the support of the four regions last year, although the outcomes were contested.

Approached for comment about this, ANC provincial secretary Lucky Ndinisa denied that there were any irregularities during the regional conferences last year.

Free State
The Free State is said to be in a state of “anarchy”, with ANC leaders making their preferences known well before its conference in June, according to senior leaders in the province.

Some branches and the youth league are calling for the removal of ANC chairperson and Premier Ace Magashule, whom they claim presides over a largely corrupt administration. But he is still popular and is likely to give any challengers a run for their money.

Magashule has also been accused of a “Stalinist” purge that saw his enemies removed from senior positions in the civil service and excluded from so-called cadre deployment.

The anti-Magashule group is lobbying for provincial secretary Sibongile Besani to replace him.

The premier is a close Zuma ally and his re-election will boost Zuma’s chances.

Youth league provincial chairperson Kgotso Morapeloa said this week that only one region of the league, despite its call for Magashule’s head, had announced its support for him.

Earlier this week, the municipal manager of the Naledi municipality, Thami Tukani, was found dead in his car, which some people fear was a politically motivated assassination.

Police said that they were investigating the matter.

Even though no planes were ever supplied, a company wants hundreds of millions of rands from the military for a contract to supply two aircraft
Read more
Advertising
Continue to the category
National