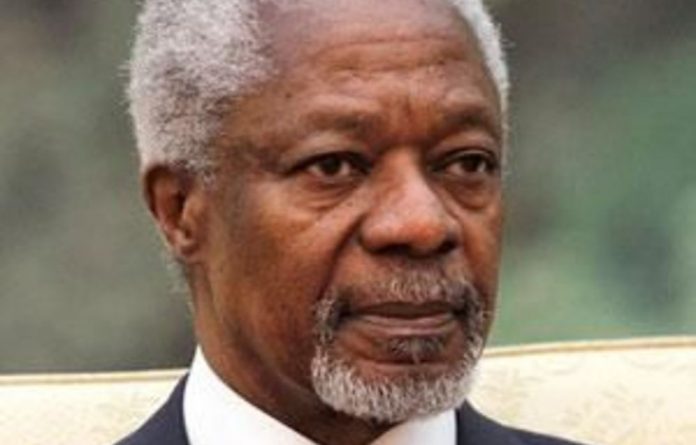 Syria has accepted a ceasefire and peace plan drawn up by UN and Arab League special envoy Kofi Annan, his spokesperson said on Tuesday, even as Syrian troops thrust into Lebanon to battle rebels who had taken refuge there.

Annan conceded he faced a “long and difficult task” in ending the fighting, as rebel group leaders meeting in Turkey weighed how to unite their fractured movement and boost foreign backing for a year-old revolt against President Bashar al-Assad.

On a visit to Beijing, Annan told Chinese Premier Wen Jiabao that global cooperation with China and other countries was the only way to defuse the conflict, whose sectarian dimensions have raised fear it could spread and destabilise the wider region.

“I indicated that I had received a response from the Syrian government and will be making it public today, which is positive, and we hope to work with them to translate it into action,” Annan told reporters after meeting Wen.

Annan’s spokesperson confirmed the Damascus had accepted the six-point peace plan, which the UN Security Council has endorsed and Annan called an “important initial step”.

Annan said it dealt with “political discussions, withdrawal of heavy weapons and troops from population centres, humanitarian assistance being allowed in unimpeded, release of prisoners, freedom of movement and access for journalists to go in and out.

“We’ve had very good discussions about the situation in Syria and they [China] have offered their full support,” he said. “They’re going to work with me and the other members of the council to ensure that the six-point plan is implemented.

“So we will need to see how we move ahead and implement this agreement that they have accepted,” said Annan.

Difficult task
The former UN secretary general, who flew to China from Russia, was trying to persuade Assad’s two most powerful allies to help advance his proposal which, crucially, does not insist on Assad stepping down right now — unlike previous plans which Moscow and Beijing vetoed at the Security Council. Arab leaders were expected to endorse it later this week at a Baghdad summit.

Annan appealed for Beijing’s support and advice, according to a pool report. “And I know you’ve already been helpful but this is going to be a long difficult task and I am sure that together we can make a difference,” Annan told Wen.

They said Syrian forces crossed a few hundred metres into Lebanese territory. A security source in Beirut said clashes had taken place near the poorly marked border but did not confirm Syrian troops had entered Lebanon.

“More than 35 Syrian soldiers came across the border and started to destroy houses,” said Abu Ahmed (63) a resident of the mainly Sunni Muslim rural mountain area of al-Qaa.

Another resident said that the soldiers, some travelling in armoured personnel vehicles, fired rocket-propelled grenades and exchanged heavy machinegun fire with rebels. He said soldiers destroyed one house with a bulldozer.

The Lebanese army blocked off the area, where hundreds of Syrian refugees — some of them active members of the rebel Free Syrian Army — have fled a year-long revolt by mostly Sunni Muslim Syrians against Assad, a member of his country’s Alawite minority, an offshoot of Shi’ite Islam.

The UN says more than 8 000 people have been killed in Syria’s upheaval over the past year. Syrian authorities blame foreign-backed terrorists for the violence and say 3 000 soldiers and police have been killed.

Western and Arab governments which would be glad to see Assad ousted are wary of what might replace the 40-year-old family dynasty and its ruthless but predictable police state.

Security appears to be fraying in many parts of Syria despite repeated army offensives to regain rebellious territory. Activists said the government was struggling to hold such areas for long, with rebels swiftly re-emerging, as they have in Homs.

Russia and China have hitherto shielded Assad from Security Council condemnation by vetoing two Western-backed resolutions over the bloodshed but approved a Security Council statement this week endorsing Annan’s mission.

Shifting from its initial unqualified backing of Damascus, Russia has given Annan’s proposal its full backing and said it could be Assad’s “last chance” to avoid a protracted and bloody civil war.

Russia’s only naval base outside the former Soviet Union is on the Mediterranean coast of Moscow’s long-time ally, Syria.

Poitical transition
Western and Arab leaders are due to meet in Istanbul on April 1 to discuss a political transition and the Arab League and Turkey were pressing various wings of the Syrian opposition gathered in the city to try to unite.

Opposition activists reported several civilian casualties in shooting late Monday and overnight in the cities of Idlib and Homs, in fighting between government forces and rebels.

Video posted on the internet by activists showed thick black smoke and blazing buildings in a district of Homs. There were wounded and bleeding men and women lying in a street.

About 300 Syrian opposition representatives from various gathered near Istanbul at the invitation of Turkey and Qatar, which holds the rotating chair of the Arab League.

A draft declaration said the new Syria will be “civic, democratic and totally free”, with a new Constitution.

Some leading dissidents recently quit the SNC, dismayed both by Ghalioun’s leadership and the influence of the Muslim Brotherhood, which draws support from Syria’s Sunni majority.

Too late for dialogue
The opposition has so far rejected Assad’s calls for dialogue saying it was too late. The crackdown has angered Arab countries including former allies Qatar and Saudi Arabia, which favour arming the rebels.

Their foreign ministers are due to meet on Sunday in Turkey for a second “Friends of Syria” conference, hoping to persuade Assad to withdraw the army from the cities, let humanitarian aid into the country and allow a political transition.

“There has to be a political solution, fundamental constitutional and political changes for transfer of power in Syria but through a Syrian-led process,” Zebari said. “We are not in a position to dictate to the Syrians what of kind of president, what kind of leader they should have.”

Assad has used the army to crush protests against his 12-year rule but his ruling Alawite Muslim minority and its allies still have substantial popular support in the country.

Annan had said on Monday that Assad’s government could not resist the “winds of transformation”, but it was too early to introduce any timeline for a peaceful solution.

“It is not practical to put forth timetables and timelines when you haven’t got agreement from the parties,” he said. — Reuters