Cele inquiry board to remain open to information 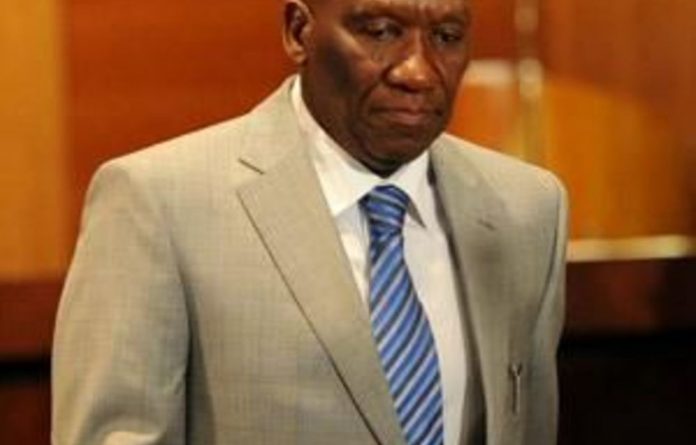 The board of inquiry into suspended police chief Bheki Cele’s conduct would retain an open mind until the last minute, chairperson Judge Jack Moloi indicated on Friday.

He said even after the submission of closing arguments on Monday, any relevant information would still be welcomed by the board.

“If necessary, the hearings can be re-started. The closing time will only be when this board renders its report as it must do in terms of the Act [under] which it is constituted.”

Closing the inquiry’s session for the day in Pretoria, Moloi said all the affidavits filed after the board’s public request would be considered as far as they were relevant to the matter.

“The final report that will come out will indicate the space occupied by those affidavits,” he said.

‘So voluminous’
Moloi said the matter was postponed to Monday because the closing arguments were “so voluminous” and could not be presented on Friday.

The board has to establish whether Cele acted corruptly, dishonestly, or with an undeclared conflict of interest in relation to two police lease deals signed with property mogul Roux Shabangu.

It also has to determine his fitness to hold office, and his capacity to efficiently execute his duties.

Earlier on Friday, public works deputy director for property leasing, Mokgaetji Tlolane, accused Shabangu of lying about the role she played in the procurement of the Middestad building in Pretoria.

Tlolane disputed Shabangu’s claims that she tipped him off about the police’s accommodation requirements.

Speaking through an interpreter, Tlolane said she did not play a role in the acquisition of the building apart from signing a document as part of her official duties.

In her sworn statement Tlolane said the department was not informed when the South African Police Service (SAPS) and Roux Property Fund began to negotiate the building lease.

Generalised claims
Under cross-examination on Friday by Vincent Maleka SC, for Cele, Tlolane said she could not speak for everyone in the department, only herself.

“So your statement should say, at no stage did Mr Shabangu ever tell you that negotiations were underway between the two parties?” asked Maleka. She agreed.

“Do you accept that the generalised claim in your statement is misleading?” Maleka asked again.

She replied: “I prepared that statement based on my understanding of the questions [posed during consultations with the evidence-leading team]”.

Maleka took Tlolane to task over differences between two statements she made.

“I can fairly tell you that I have compared the draft statement and the signed one. Do you accept there are significant material differences between the two statements?”

Tlolane reacted: “I have read the [draft] statement but I don’t remember its contents. I was not feeling well when the draft statement was made, I can’t recall the contents.”

This information was omitted from Tlolane’s signed statement.

“I agree, however, I mentioned that the department of public works was not informed that the negotiations had begun,” said Tlolane.

Moloi earlier said Shabangu had refused to testify before the inquiry.

“We, as the board, had invited Mr Shabangu to come and testify, but he has flatly refused to do so.”

Shabangu has identified Tlolane as the person who informed him that the police wanted to lease the Sanlam Middestad building in Pretoria.

Cele has maintained he had nothing to do with identifying the two buildings — Sanlam Middestad in Pretoria and Transnet in Durban — for police office space.
— Sapa
This was despite Public Protector Thuli Madonsela’s negative findings last year about his role in the leases.