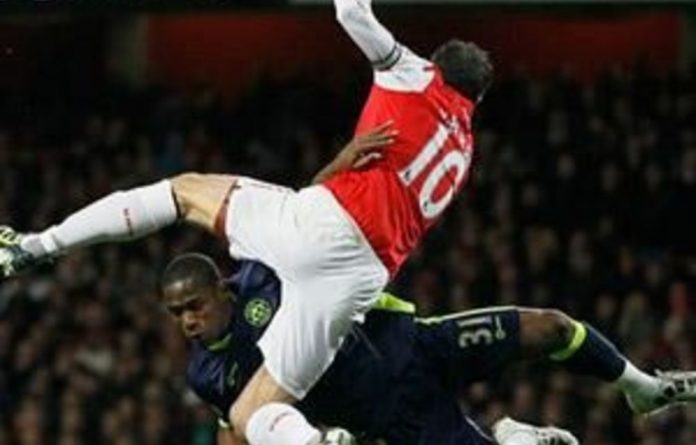 Two early goals turned out to be enough for Roberto Martinez’s side to pull off an even more unexpected success which significantly improves their chances of avoiding relegation.

The Latics are now five points clear of third-bottom Bolton Wanderers, who have two games in hand, in a five-team tussle to avoid the drop.

The result was a blow to Arsene Wenger’s Gunners’ hopes of holding off the challenges from Tottenham and Newcastle and qualify for the Champions League in third place.

Had they won they would have been eight points clear of both rivals, who now each have a game in hand with which to lessen a five-point gap.

Wenger made one change from the side that had won 3-0 at Wolverhampton Wanderers last week, with Tomas Rosicky replacing Aaron Ramsey in midfield.

Wigan were unable to call upon forward Shaun Maloney, whose goal had inflicted defeat upon United on the same night, so Jordi Gomez returned to the starting line-up.

But the corner, in the seventh minute, was easily cleared — and Wigan scored on the counter attack.

Franco Di Santo was the scorer after Gomez had put him one on one with goalkeeper Wojciech Szczesny. The Pole got a touch to the Argentine’s shot but the ball looped up and Di Santo was able to find the net before defenders could intervene.

It took Wigan all of a minute and a half to make it 2-0, with Gomez the scorer this time. Victor Moses turned Sagna and delivered a cross from the left that James McArthur could not convert at the near post but Szczesny was unable to grab the ball and Gomez was there in a flash to poke home.

The home fans were shocked into silence and Arsenal made a change straight away with Mikel Arteta, seemingly having injured a foot taking a free-kick, replaced by Ramsey in the ninth minute.

Al-Habsi was soon required to make another acrobatic save to keep out a header bound for the top corner, with Benayoun again the man denied when he met Rosicky’s cross.

But the Oman international didn’t even move when Vermaelen powered a header past him in the 21st minute, with the Belgian leaping unchallenged to meet Rosicky’s delivery from the right.

Poor finish
Premier League top scorer Robin van Persie was next to have a go and again Al-Habsi pulled off a save. But Johan Djourou was guilty of poor finishing when he poked wide from eight yards a minute later.

Arsenal were pouring forward now, although Rosicky wastefully fired over after an exchange with Van Persie.

Sagna was booked for hauling Moses down, although the Wigan man stayed down too long for Wenger’s liking with the Arsenal manager convinced the Latics were time-wasting.

Wigan made it to halftime with their lead intact and soaked up pressure straight after the restart but Moses’s pace and strength saw him get the better of Sagna again, with Szczesny having to parry the shot the followed.

Van Persie crafted a chance for an equaliser with a cut back for Andre Santos but the Brazilian scuffed his shot wide to let Wigan off the hook.

Suddenly Moses sprinted clear after the Arsenal defence failed to deal with a throw-in but the Nigeria forward fired straight at Szczesny to waste his side’s clearest opportunity for a long while.

Arsenal made a second change just after the hour mark when Gervinho replaced Benayoun. Ramsey headed a difficult chance over before another Wigan counter attack saw Gomez volley wide after Moses had picked him out beyond the back post.

Wigan refreshed their line-up as Di Santo was replaced by Connor Sammon before Wigan survived a scary moment when Al-Habsi made a mess of a punch away under pressure.

Theo Walcott had hardly been in the game but was convinced he had been impeded by Maynor Figueroa chasing a through ball that would have put him clear.

But referee Andre Marriner decided otherwise as Wigan moved to within five minutes of the finishing line.

They negotiated their way through those, plus five and a half of added time, which saw Al-Habsi booked for time-wasting. — AFP