Traditionalists rally behind the man with many wives 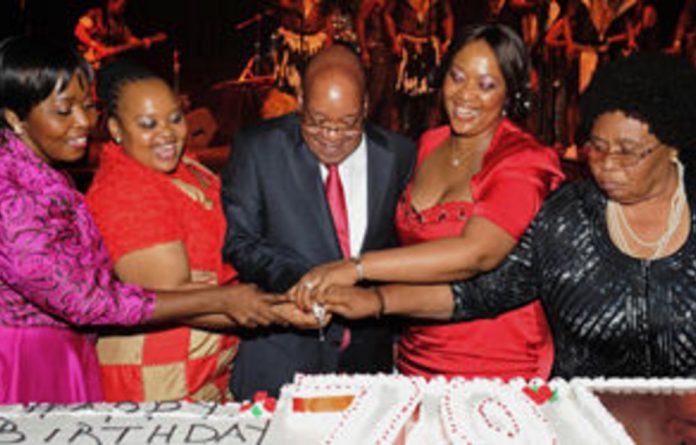 In the run-up to Mangaung, the possibility that President Jacob Zuma may be using his sixth marriage to garner support cannot be discounted. Desiree Lewis, associate professor in the department of women’s and gender studies at the University of the Western Cape, said she believed that Zuma could be using the tradition card opportunistically.

“Generally, Zuma’s leadership style has always revolved around spectacle, demonstrating both to his enemies and supporters that he embodies some kind of ethnic authenticity, so it’s a useful political tool,” she said.

Modern marriage often seems to be a tradition that has less to do with love and more to do with property rights. This is probably why, when eyebrows are raised concerning the event, the question that inevitably follows is: “Who’s paying for it?”

The presidency has been clear that Zuma’s wedding will be a private family ceremony, paid for by the president and not the government, which makes it hard to take issue with the marriage on narrow financial grounds, especially given that Zuma was already a polygamist when he took office. Still, one has to ask what it all means for South Africa.

Lewis dismissed the suggestion that polygamy was proof of a growing conservatism in the country. Rather, she said, it could be showing a deeply embedded conservatism over gender issues in sections of society that still relied on traditional gender roles and had feudal-like notions of authority, obedience and loyalty.

Contralesa condones
If this is Zuma’s gambit, it seems to be working. His marriage is being held up as a model of cultural traditionalism by the Congress of Traditional Leaders of South Africa (Contralesa). The organisation’s general secretary, Setlamorago Thobejane, said Zuma’s latest marriage showed he was not willing to compromise his culture. “We’re very much pleased to realise that, within the South African democratic situation, we still have leaders who know who they are and where they come from.”

Nobody has ruled out the idea that Zuma may take yet another wife. He is known to have paid lobola to the family of Swazi princess Sentebile Dlamini and, although the presidency is silent over the matter, it at least indicates an intention to marry her.

“If he’s capable to do that, then let him,” said Thobejane. The traditional leaders, he said, would bless the marriage “as long as it’s driven by African beliefs and way of life”.

But this traditionalism does not sit easily with everyone. For Elaine Salo, who heads the University of Pretoria’s Institute for Women’s and Gender Studies, it signifies the emergence of a conservative, nationalist masculinity that is troubling for women’s rights, of a perspective that implies one is not really Zulu unless one is also a polygamist.

“It’s a problem if polygamy is held as a model for younger generations because it ties masculinity with multiple marriages,” said Salo. Instead, she said, society should recognise that there were many ways of being Zulu that included both monogamy and polygamy.

Uneasily coexisting
Polygamy’s existence in a progressive society may seem contradictory, but lawyers and gender activists agree that they can coexist, if uneasily. “The South African Constitution promotes and protects cultural pluralism, so there is no inherent contradiction between [it] and the practice of polygamy,” said gender analyst Nomboniso Gasa. “If women and men choose to be in polygamous unions, that choice must be respected.”

There were no simple answers, Gasa said. “Polygamy doesn’t necessarily have negative consequences for women’s rights and it also doesn’t automatically mean that monogamy is better for women. There are monogamous relationships which are insufferable.

“What determines the nature of the relationship is the experience of those who are involved in it.”

Although both are recognised, there is a clear hierarchy in the law and the Constitution trumps customary law. Polygamist relationships are not supposed to violate the constitutional principle of equality. Although the polygamist ideal is one of fairness and equality, the reality is often very different and there are still questions about whether polygamy is really compatible with the principle of equality.

“We’re living in a society which is deeply unequal, where women’s rights are often violated,” Meyersfeld said.

Despite these contradictions, no one has seriously taken issue with the polygamist components of customary law.

“It’s open to challenge,” said Meyersfeld, “but I’m not sure if it’s a winnable challenge.”

Trends of the tradition
Having more than one wife is not as common in South Africa as it once was and researchers have noted a consistent decline in the practice over the years. According to the South African Demographic and Health Survey, 6.8% of women were involved in polygamous relationships in 1998.
This number dropped to 3.9% by 2003 and anecdotal evidence shows that the number has declined further since then. The practice is more prominent among older men and women outside urban areas.

The Human Sciences Research Council’s 2005 South African Social Attitudes Survey found there is widespread support for monogamy — 87% of all race groups supported marriage to one partner for life. Polygamy was endorsed by a greater percentage of Africans (18%) than coloureds (4.4%), Indians and whites (both 11%). — Faranaaz Parker

After months of the strictest Covid-19 restrictions in the world, it seems we are in line for a further easing of the regulations
Read more
Politics

The president and Cabinet dropped their salaries and rejected a hike, but councillors take 4% more
Read more
Coronavirus

I’m going fishing on Friday. Watch the sun rise, smoke a spliff, tangle a line in the sea. Unless NDZ is tempted to do a level U-turn
Read more
Business

Tobacco companies are fighting to lift the ban on cigarette sales, but research shows people are still smoking — and this is feeding the black market
Read more
Politics

David Mabuza is hard at work — it’s just not taking place in the public eye. The rumblings and discussion in the ANC are about factions in the ruling party, succession and ousting him
Read more
Opinion

The government has consulted widely on measures to restrict the spread of Covid-19, but rule by selective committees such as the National Coronavirus Command Council requires vigilance
Read more
Advertising
Continue to the category
National