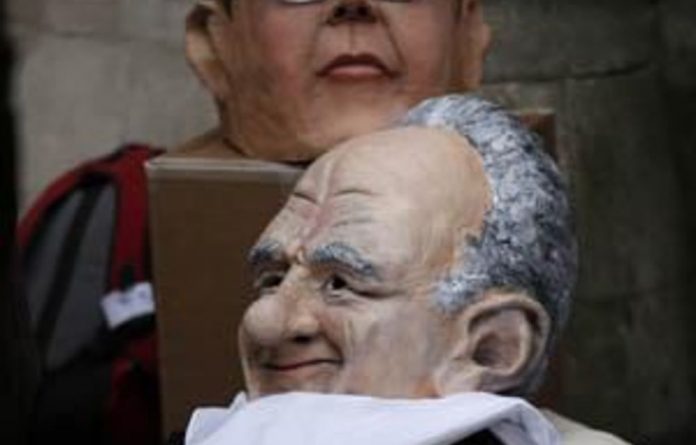 David Cameron has previously denied having had any “inappropriate conversation” with Murdoch about the bid at the dinner on December 23 2010.

News Corp was eventually forced to drop its attempt to take control of the highly profitable BSkyB in July last year after its British newspaper wing was engulfed by a phone hacking scandal at the News of the World tabloid.

James Murdoch was grilled about his family’s links to politicians as he gave evidence under oath at the Leveson Inquiry, which was set up in the wake of the hacking scandal.

Rupert Murdoch is due to give evidence on Wednesday and Thursday.

Side conversation
His 39-year-old son admitted that he and the prime minister had talked about the bid for the highly profitable BSkyB at the dinner.

“It was a tiny side conversation ahead of a dinner where all these people were there,” Murdoch told the inquiry.

When asked in parliament last year whether Cameron had discussed BSkyB at the dinner, Cameron said he had “never had one inappropriate conversation.”

Speaking to reporters after Murdoch’s evidence, Cameron’s official spokesman declined to comment on Murdoch’s testimony. “It is a public inquiry and it should take its course,” he told reporters.

James Murdoch revealed that he had a total of 12 meetings with Cameron before his Conservative Party came to power in a coalition government with the Liberal Democrats at the May 2010 general election.

Crass calculation
He said News Corp executives, including himself, had held numerous meetings with ministers during the company’s bid to take full control of BSkyB, of which it owns 39%.

He denied that the Murdoch-owned Sun tabloid, Britain’s biggest-circulation newspaper, had backed the Conservatives in the 2010 general elections to advance the BSkyB bid.

“I would never have made that kind of a crass calculation about what the newspapers did,” he said. “It just wouldn’t occur to me.”

He admitted he was “friendly” with Britain’s finance minister George Osborne and had discussed the bid with him informally on at least one occasion.

But he added: “Nothing I would have said to Mr Osborne would have been inconsistent with any of our public advocacy on the subject.”

A storm of revelations
In the day-long session at the inquiry, James Murdoch was also quizzed about his stewardship of News International, News Corp’s newspaper wing which published the News of the World.

The tabloid was closed down in July amid a storm of revelations that it illegally accessed the voicemail messages of a murdered teenage girl and the families of dead soldiers, as well as dozens of celebrities and politicians.

James Murdoch quit as News International’s executive chairman in February amid questions about how much he knew about hacking.

He repeated on Tuesday his denial that he knew hacking had gone beyond a “general awareness that a reporter had illegally intercepted voicemails”.

He added that he had been told editorial staff had received “extensive training” in journalistic ethics.

Knowing what he knows now, he said, the News of the World “must have been cavalier with risk, and that is a matter of huge regret.”

Once considered the heir apparent to his father’s empire, James Murdoch has now relinquished all his major media roles in Britain.

He quit this month as chairman of BSkyB, saying he did not want to become a “lightning rod” for the hacking scandal.

Rupert and James Murdoch appeared together before a British parliamentary committee in July to answer questions about phone hacking, when Rupert was attacked with a shaving foam pie by a protester. — AFP