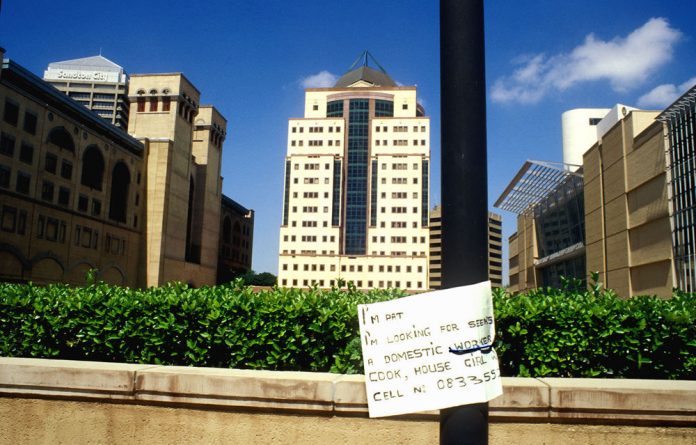 The ANC's proposed job seekers' grant has been met with far less enthusiasm than the abandoned youth employment subsidy.

"The job seekers' grant will have nowhere near the impact the youth wage subsidy would have had," said Adcorp labour market analyst Loane Sharp.

"The change from the unemployment subsidy to a job seekers' grant involves such a totally different economic method of working that it's not clear that the ANC has identified the problem of unemployment correctly."

The African National Congress resolved at its June policy conference to include a job-seekers grant as part of the comprehensive social security package, in response to submissions by the National Youth Development Agency and the ANC Youth League.

The party has shown no appetite for the youth wage subsidy put forward by the Treasury last year in an attempt to alleviate the high youth unemployment rate.

Treasury estimates that unemployment among those under the age of 25 years old is about 50%, accounting for 30% of total unemployment.

The two-year subsidy for employers who take on first-time workers could create 178 000 net new jobs at a cost of R28 000 each, Treasury said.

The subsidy was meant to be put into effect in April this year, but had been stuck in negotiations at the National Economic Development and Labour Council.

Cosatu, the ANC's alliance partner, was strongly opposed to the subsidy, arguing it would give companies an incentive to let go of existing workers in order to employ subsidised ones.

Sharp said the grant would subsidise the cost of recruitment, which was unnecessary as South Africa had a very well-functioning informal industry recruitment system.

"Unemployment is a function of the cost of employment, not the cost of recruitment … The subsidy will not make job seekers any more desirable to job givers."

The youth wage subsidy, however, could have created over 500 000 jobs.

"Our own estimates suggest that National Treasury was very conservative in estimating the number of new jobs that would be created," said Sharp.

"We believe employers are much more sensitive to employment costs than the Treasury."

He said it was pity the subsidy had seemingly been abandoned as it would have shown the trade unions that employment is "wage sensitive".

"It would demonstrate, almost in an experimental way, just how sensitive employment is to wages … which has been disputed in the trade union movement."

Black Business Council (BBC) spokessperson Sandile Zungu also saw immediate benefits to the youth wage subsidy, while the advantages of the grant were not clear.

"As the Black Business Council … we are waiting for details of how they envisage doing it."

The BBC was in favour of the youth wage subsidy as it "had an inherent motivation for business to come to the party and an immediate benefit to young people getting some experience whilst not necessarily in full employment".

Zungu said the proposed grant raised important questions, such as was it going to encourage business to employ youth; would it create an incentive for the unemployed to pull up their bootstraps and continue to look for work; would it strengthen or weaken the state's coffers in the long-term, and; who was going to pay for it given that the South African tax base was limited?

Zungu suggested labour's valid concerns about the subsidy leading to job losses among older workers should have been addressed, rather than abandoning the scheme altogether.

"Instead they threw out the baby with the bath water. We did a face exchange instead of treating the warts and pimples."

Rather than creating jobs, the job seekers' subsidy might just teach the youth to queue.

"The youth must wake up at 4am and go to work, not wake up to go and queue," Zungu said.

Sharp and Zungu both questioned the sustainability of the grant.

Sharp said according to Adcorp figures, the average time spent searching for work was 806 days, while South Africa had about 6.5-million unemployed or discouraged work seekers.

Multiplying 6.5-million by 806 days, amounted to just over 5.2-billion days for which work seekers would need to be subsidised, making the grant "fiscally impossible".

Treasury had set aside R5-billion over three years for the subsidy. The job seekers' grant had not yet been costed.

"I don't really believe that giving grants is going to arrest our high employment, given our restrictive labour legislation," he said, referring to both the youth employment subsidy and the job seekers' grant.

"You can't, on the one hand, treat employers as enemies of the people then, on the other hand, expect them to give jobs."

He said if the government was serious about arresting high unemployment, it should introduce less restrictive labour legislation.

"If you bring in a subsidy to encourage entreupreneurship and to encourage economic activity it could work, but not with our current punitive labour legislation."

Economist Mike Schussler said given the high unemployment, the country could not be seen to do nothing.

Broad employment figures for the first quarter of the year showed about 7.3-million people were employed full-time in the formal sector, while about 7.75-million people, including discouraged work seekers, are unemployed.

"I don't know of any countries, outside of war zones or those involved in civil war, to have more people unemployed in broader terms … than employed," Schussler said.

The unemployed therefore made up double the number of the some four million workers belonging to trade unions, he said.

"So for the politicians, they have to be seen to do something."

However, he did not see the job seekers' grant solving the country's unemployment problem.

"The youth employment subsidy may at least create some jobs … but nobody knows at the moment what this thing [grant] is."

Schussler said it would probably make more of a difference to fix the education system, re-examine the labour laws, give farmers confidence in their tenure, and encourage miners to mine.

Zungu warned it was too soon to judge the job seekers' subsidy.

"We may be jumping the gun, they may have a genie in the bag which, once put on the table, we may engage and say, what a smart way out of the quagmire."

The proposal will be fleshed out at the ANC's national conference in Mangaung in December.

As the ANC in Eastern Cape prepares for its elective congress, its chairperson, Oscar Mabuyane, has called on provincial leaders to accept the outcomes...
National