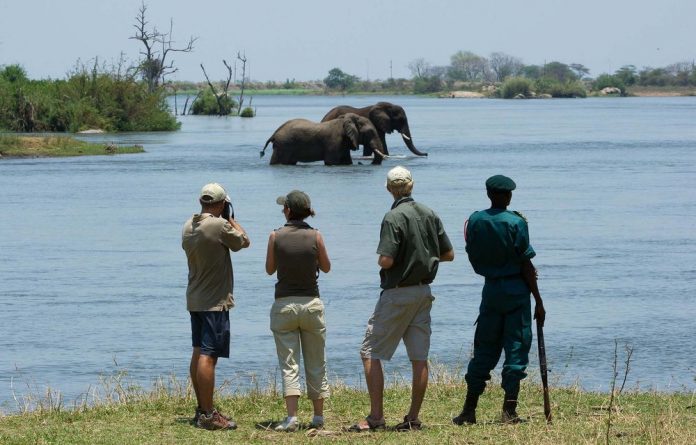 We were heading home from our night drive in the Majete Wildlife Reserve when Rob Clifford signalled to our guide to stop. What had he spotted? We waited, torches poised. Clifford pointed to our right, and there, putting the finishing touches to a huge web anchored in trees high above us, was a spider.

I squealed a little, but with encouragement from Clifford trained my binoculars on its chubby body and watched transfixed as it journeyed round in ever-decreasing circles.

With the release of three lions from South Africa last month, hot on the heels of four leopards, Majete has just become Malawi’s only big-five safari park — the culmination of a £1.5-million, nine-year African Parks foundation project that has seen it restocked with more than 2 500 animals. Clifford works for respected safari operator Robin Pope Safaris, and its new luxury lodge, Mkulumadzi, is the icing on the cake. It is one of a handful of new lodges opening up parts of the country that had barely been visited a year or two ago.

It marks a significant new direction for Malawi’s tourist industry. This has never been a prime safari destination like Zambia or Tanzania. Most tourists would combine a safari with activities on Lake Malawi — or go animal spotting in Zambia and come to Malawi for relaxation. Now safari is on its way towards becoming a mainstream option in Malawi too.

Majete and the Nkhotakota wildlife reserve in the country’s central region, where two lodges have opened since 2010, are the first new reserves for 15 years. The World Bank is investing $850 000 in Nkhotakota to conserve and protect wildlife, develop sustainable tourism and train staff.

Robin Pope Safaris’ commitment to Malawi is seen as another sign that wildlife is becoming serious business. As well as Mkulumadzi, the company has operated Pumulani beach lodge on Lake Malawi since 2008, and will open a third property in Liwonde next year.

The new reserves may not have as many large mammals, particularly predators, as better known safari destinations, but they offer the chance to see wildlife away from the crowds, in stunning areas of unspoilt wilderness. Safaris in Malawi, where tourist numbers are still relatively low, can also be more affordable.

No one is pretending, though, that visitors to Majete will be guaranteed sightings of all the big five — three lions and four leopards will make themselves pretty scarce in a 70 000-hectare reserve.

We saw plenty of large animals —hippos, buffalo and sable antelope among them — but with Clifford’s help, I came to think of my Majete highlights as a kind of little five. One day we came across a cluster of ink-cap mushrooms, dripping poison like a gruesome fairytale forest. On another, while tracking elephants, we spied a tiny tortoise.

There were birds aplenty; my favourite was the racket-tailed roller, its weird breast the blue of a highlighter pen.

Ridiculously romantic
Mkulumadzi lodge, which opened last year, has spacious, open-fronted bush chalets on the banks of the river Shire, with solid but elegant furniture in earthy, understated tones. The restaurant — with food just the right side of fancy — comes complete with a soundtrack of guffawing hippos and the roar of rapids. A small swimming pool is perfect for cooling off after a hard morning spent examining animal excrement.

There are all sorts of animals at Nkhotakota, but they are hard to spot: 1 800km2 of miombo woodland makes for some pretty good hiding places. But it also makes for an unrivalled sense of isolation. Tongole Wilderness Lodge, which also opened last year, is 18km from the nearest village. My thatched suite — another open-fronted affair, this time above the Bua River — boasts an enormous sunken bath and views of, well, trees.

The main lodge, which elephants frequently pass in the dry season, has several ridiculously romantic dining spots: there is one on a rock in a stream, accessed by a suspension bridge, and another 10m in the air under the eaves of a spectacular treehouse.

The next day I scrambled through steep bush to the summit of the nearest mountain, Kasukusuku, accompanied by Tongole’s guide and an armed game scout. If I had failed to comprehend the sheer vastness of the reserve before, I got it now. Save for the brown Bua far beneath us, Lake Malawi shimmering on the horizon and the occasional pale, velvety glade, the landscape as far as I could see was one bobbly green carpet of forest.

In the afternoon we canoed down the river, taking turns to crash through the rapids, then set off home as the sky began to glower.

I travelled between Majete and Nkhotakota by plane and car — a total of four or five hours on the road and one in the air, from Lilongwe to Blantyre. Driving the whole distance would take seven or eight hours. A tour operator would probably suggest breaking the trip at a lakeside destination. Tongole will soon open an airstrip, and a chartered flight from Lilongwe will take around half an hour.

A lower-budget option in Nkhotakota is the laid-back Bua River Lodge, three hours from Lilongwe. It was built by expat Brit John Dickinson, a soil conservationist, and opened in 2010.

I went out with a flip-flop-wearing poacher-turned-guide, who seemed almost to glide through the bush. With the obligatory scout, we walked along the river, then started to clamber up the bank.

Suddenly he grabbed my arm. “Elephants,” he whispered, and there they were, two of them, right above us — we had all but stumbled upon them. We stared for a second, then hurried down the slope to a safer vantage point.

At the lodge I was starting my lunch of avocado salad when a member of staff rushed up: “They’re back, at the water.”

I grabbed my binoculars and ran and then stood on the rocks and laughed with delight as, one by one, a whole herd with young appeared around a bend in the river and climbed out into the long grass: 17 elephants, alone in the wilderness.

A deck at the front of my tent overlooked the river. Later, in the open-air bathroom at the back I stood under the shower (water heated in a donkey boiler — a drum mounted above a wood fire) looking up at the star-packed sky. I ate dinner in the semi-dark at the lodge, clearing my plate of Lake Malawi kampango (catfish) in a delicate Thai-scented sauce. The chefs, like all the staff, are former subsistence farmers whom Dickinson trained.

Bua River may not have Tongole or Mzkulumadzi’s high-end credentials, but it loses nothing for it. In my spacious bush tent reached by a wooden bridge, lit at night by paraffin lamps, I felt further from the rest of the world than ever. — © Guardian News & Media 2012

The pandemic has caused 50 000 businesses in the sector to temporarily close, putting 600 000 jobs at risk
Read more
Friday

The secrets behind the success of Malawi’s opposition coalition