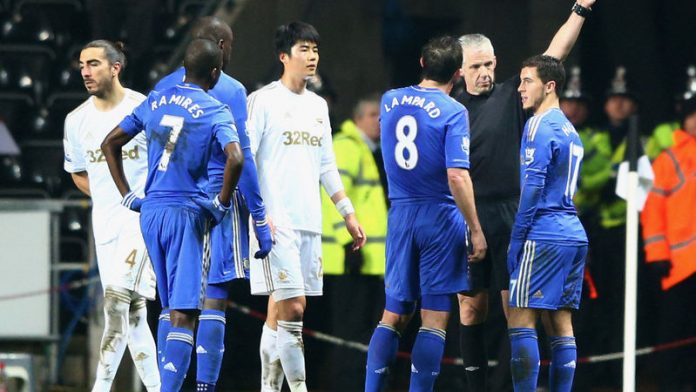 Chelsea's Hazard, who was sent off the pitch after the incident during Wednesday's match, later met the 17-year-old named locally as Charlie Morgan, son of the Swansea City director Martin Morgan, in the Chelsea dressing room and apologised for the incident.

Swansea, who won 2-0 at Stamford Bridge in the first leg, held on for a goalless draw at Liberty Stadium to set up a final against Bradford City but the main talking point was the bizarre altercation that led to the Chelsea midfielder's red card 12 minutes from time.

Belgian Hazard said he had not intended to boot the ballboy.

"I apologise. The ballboy came in the changing room and we had a quick chat and I apologised and the boy apologised as well, and it is over. Sorry."

'Both wrong'
The red card shown by referee Chris Foy will lead the 22-year-old to be banned for three games, though there may be scope for that sanction to be extended.

"They have apologised to each other," Chelsea's interim manager Rafael Benitez told reporters. "They knew they were both wrong. He [the ballboy] was wasting time. Hazard wanted to get the ball back quickly and he was kicking. They both made mistakes.

"We will deal with this internally. He was frustrated and just wanted to get the ball back, but we will analyse it and see what happens."

"I'm not the authorities but in my eyes it's a red for all those asking. Us players do put refs in bad spots at times unfortunately!" Ferdinand tweeted.

"Both the kid and Hazard were in the wrong. Not having Hazard tried to hurt him though. He just tried to toe poke it out of his grip," former England forward Owen wrote on his Twitter feed.

Tottenham winger and Wales international Gareth Bale was more sympathetic towards the player, also taking time to congratulate the Welsh side's achievement of securing a first appearance in a major domestic cup final.

"Unbelievable decision by the referee to send Hazard off but congrats to Swansea. Who'd have predicted this final?!" Bale tweeted. – Reuters