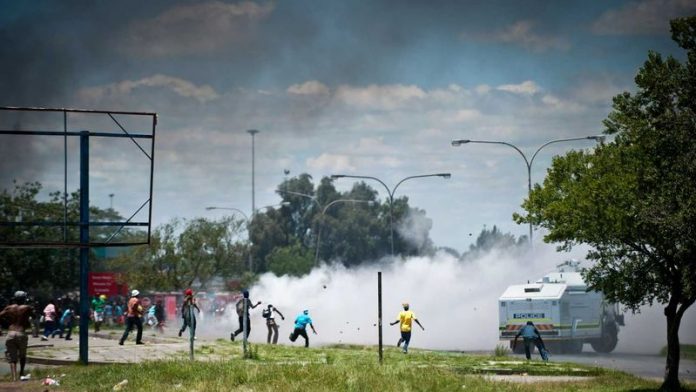 "If we need to burn down this place, then it's fine," Thladiyane Kgodumo, an unemployed Zamdela resident told the Mail & Guardian as he stood next to a smouldering tyre on a street of dirt.

"The government has been undermining this community for too long. We are not listening to their empty promises and we will continue fighting until they listen to us."

Zamdela has been the scene of violent protests since Sunday, when residents took to the streets in the township and Sasolburg to vent their anger. They barricaded roads, burned vehicles and government property, and pelted bystanders and police with missiles ranging from rocks to burning tyres. Police responded by firing rubber bullets and teargas.

Police confirmed four protesters were killed this week after being caught in the fracas between demonstrators and the police.

Pule Thulo – one of the deceased – was killed outside the Zamdela police station.

Residents of the area oppose the proposed merger of the Metsimaholo municipality in Sasolburg with the Ngwathe municipality near Parys. They say they were not consulted on the process after the plan was announced by the government in November last year.

The Municipal Demarcation Board says the move to one big municipality – one of eight proposed mergers nationally – will address service delivery more effectively. But this holds little water with the community. They claim Ngwathe is badly run by allies of Free State premier Ace Magashule and is beset by nepotism and corruption.

"The Ngwathe municipality has run itself into the ground and we, as residents of Metsimaholo, do not want to be associated with those thieves," said Zamdela resident Sam Mthembu. "Corrupt people occupy the council and corrupt people occupy the provincial government. They only look after themselves and don't care about Zamdela."

Task team
But it was not their concerns that led to the government halting the planned merger – at least for the moment.

On January 22, Local Government and Traditional Affairs minister Richard Baloyi postponed the merger of the municipalities in the wake of the violent protests.

"People were under the impression that this [the merger] was going to happen … that it was already decided when it wasn't," Baloyi said.

He said he would appoint a task team to investigate the viability of the proposed merger.

"There has been no merger of these two municipalities and there won't be a merger until the task team has completed their work," he said.

Baloyi warned residents that they were fully within their rights to protest, but he would make sure action was taken against those who did so violently. "Clearly there are elements of criminality to the Zamdela protests, but we will deal with that once the task team has finished its work."

For Zamdela residents such as Nelson Maduna, Baloyi's words are not enough. "Our leaders are afraid to see us and talk to us properly because they know they are wrong. So we are going to carry on like this until they listen," he said.