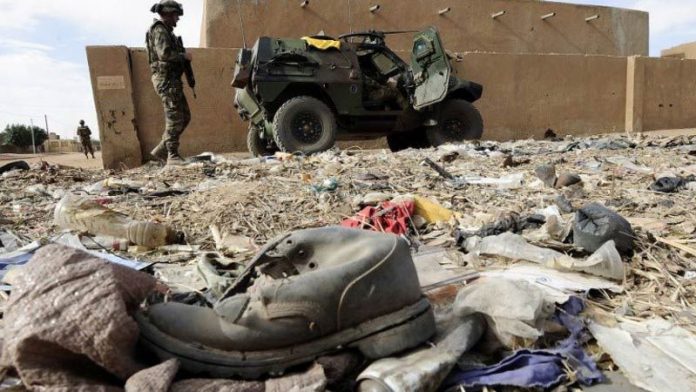 The head of Russia's arms export agency said it had delivered small amounts of light weapons for Mali's poorly equipped and deeply divided army, which is struggling to restore security after a French-led military intervention helped it push out al-Qaeda-linked rebels who had seized the country's north.

"We are in talks about sending more, in small quantities," said Rosobornexport chief Anatoly Isaikin, quoted by the Interfax news agency.

In the northern city of Gao, the scene of twin suicide bombings and a downtown street battle in recent days, French troops defused a homemade bomb they said contained 600 kilograms of explosives in the city centre.

The bomb, which was made of four metal barrels filled with explosives and connecting wires, was in the courtyard of an abandoned house, an AFP correspondent said.

The bomb had been there since at least Monday, the reporter said.

The United Nations said on Wednesday it was working on a "regional strategy" for the Sahel, the semi-arid region south of the Sahara desert, where analysts say a dangerous mix of Islamist extremism, kidnapping, drug trafficking and organised crime are fuelling unrest including the Mali crisis.

The UN special envoy for the Sahel, Romano Prodi, and UN west Africa representative Said Djinnit were to begin a three-day visit to the region Wednesday to discuss the situation in Mali with the presidents of its neighbours Senegal, Mauritania, Burkina Faso and Niger.

'Catastrophic spiral of violence'
UN rights chief Navi Pillay warned on Tuesday that Mali risked descending into a cycle of violence, not only by rebel groups but also by the army and black majority waging revenge attacks on light-skinned Tuaregs and Arabs accused of supporting the insurgents.

Rights groups have accused the Malian army of killing suspected rebel supporters and dumping their bodies in wells, and Tuaregs and Arabs have also come under attack from their black neighbours in northern towns such as Timbuktu.

Many Arabs and Tuaregs have fled the north.

In all, the crisis has caused some 377 000 people to flee their homes, including 150 000 who have sought refuge across Mali's borders, according to the UN.

"The recent developments in the conflict have sown panic among these people, who have fled for fear of being trapped between two fires," Nawezi Karl of aid group Doctors Without Borders (MSF) said on Wednesday.

The organisation warned the refugees are living in precarious conditions, threatened by hunger and having taken few belongings with them.

Mali imploded after a March coup by soldiers who blamed the government for the army's humiliation at the hands of north African Tuareg rebels, who have long complained of being marginalised by Bamako.

With the capital in disarray, al-Qaeda-linked fighters hijacked the Tuareg rebellion and took control of the north.

French intervention
France launched its intervention on January 11, after Mali's interim government called for help fending off the Islamist insurgents as they made incursions into government territory.

But after pushing the rebels from the towns under their control, France is eager to wind down the operation in its former colony and hand over to United Nations peacekeepers.

US President Barack Obama highlighted Washington's support for France's Mali operation in his annual State of the Union address on Tuesday.

"We will need to help countries like Yemen, Libya and Somalia provide for their own security, and help allies who take the fight to terrorists, as we have in Mali," he said.

Obama on Monday allocated up to $50-million for ongoing US airlift and air refuelling services to France and Chad, which has pledged 2 000 troops for Mali, most of them already deployed.

Canada's foreign minister said Ottawa was also mulling requests for money and military trainers for Mali, but ruled out sending troops for an operation he said was "already amounting to a counter-insurgency".

"We're not, at the drop of a hat, going to get into another Afghanistan in this region," he told a parliamentary committee. – Sapa-AFP