Judiciary: Who guards the guardians of the law? 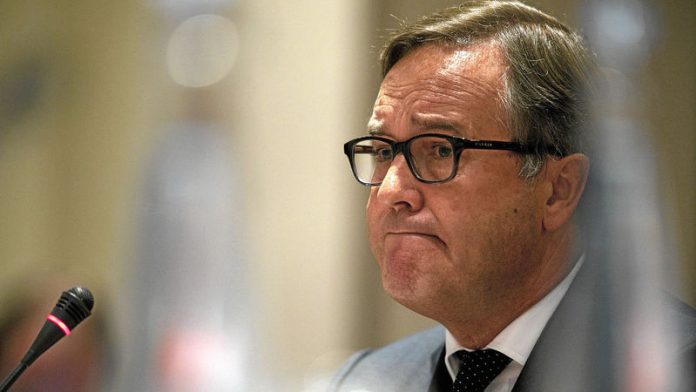 This is the warning the Supreme Court of Appeal gave all judges in New Clicks v Minister of Health in 2005, quoting the author of The Little Prince. It was delivered by its deputy president, Louis Harms, who has now retired after 20 years on its Bench. Beyond determining the worth of one's own work, the injunction implied by this warning entails the yet more basic task of setting its boundaries. In the case of the judge, a public servant extraordinaire, it entails identifying and respecting the limits of judicial authority itself.

The judge's duty to do so has long been recognised. The courts, wrote Alexander Hamilton in 1788, were intended under the American Constitution to keep the legislature "within the limits assigned to [its] authority".

Much later, the same was said for English law, but this time with equal application to the executive. In 1992, in the cause célèbre of M v Home Office, a Zairean asylum-seeker was repatriated in breach of what the court understood to be a home-office undertaking.

For South Africa, the position, in principle, has been made equally clear. It is the constitutional function of the court to pronounce upon the validity of all public power, of whatsoever nature. The Constitution is supreme; the judges' oracular power to pronounce upon it binds the other arms of state.

Constitutional anathema
But, if no crevice of public power is beyond judicial reach, does it follow that judicial power itself is unlimited? That notion is constitutional anathema. It invites comparison with the power of the king in medieval English law. "Every legal power must have legal limits otherwise there is dictatorship," as one text has it.

But how are judges to ascertain the limits of their powers? For the appeal court, a sense of noblesse oblige was not good enough. In National Director of Public Prosecutions v Zuma, Harms went straight to the heart of the matter.

Zuma had asked the high court to annul the decision of the national director of public prosecutions to indict him for corruption. The high court found for Zuma, but the judge, Harms held, had failed to adhere to the basic tenet "that in exercising the judicial function, judges are themselves constrained by the law".

Inverting the gospel, what they did to others, judges had to do to themselves: "The independence of the judiciary depends on the judiciary's respect for the limits of its powers. Even if, in the words of the learned judge, the judiciary forms a 'secular priesthood', this does not mean that it is entitled to participate or be judgmental, especially about those who have not been called upon to defend themselves …"

An objective determination is required, then, by the judge himself, in answer to the timeless question: Quis custodiet ipsos custodes? Who guards the guardians?

The problem is no arid abstraction. Daily the issue arises: What determines whether "the court will take time" (the incantation of a court rising with a reserved judgment) and how long this might be? How in this and related contexts judges are controlled by law, not seigneurial whim, was explored by Harms in another cause célèbre, the New Clicks case itself.

Constitutional principle
A full high court Bench had, by majority, dismissed a challenge to pricing regulations for medicines. All parties were in agreement that the matter was urgent. Application for leave to appeal followed the next court day. It was eventually heard weeks later. The ruling was not immediately delivered, as is customary, but reserved by the judges. After five weeks, the ruling was requested. There was no response. So an application for leave to appeal was lodged with the appeal court, on the basis that for the high court not to grant the application within a reasonable period was, in the absence of an explanation, inexplicable. In the circumstances in which the matter was argued (agreed by the parties to be urgent), constructively, it was a refusal of leave to appeal.

Harms ruled that the application had been lodged competently with the appeal court. He anchored the ruling in constitutional principle and in particular the right to a fair hearing: "The Supreme Court Act assumes that the judicial system will operate properly and that a ruling … will follow within a reasonable time. The Act, not surprisingly, does not deal with the situation where there is neither and a party's right to litigate further is frustrated or obstructed … This court has a constitutional duty to protect its processes and to ensure that parties, who in principle have the right to approach it, should not be prevented by an unreasonable delay by a lower court."

Some judges, Harms wrote caustically, "believe … that any demand for quick rendition of reserved judgments is tantamount to interference with the independence of judicial office … They are seriously mistaken … The judicial cloak is not an impregnable shield providing immunity against criticism or reproach … [It] is judicial delay rather than complaints about it that is a threat to judicial independence because delays destroy the public confidence in the judiciary".

Similarly, in Goose v Wilson Sandford and Co, the Court of Appeal for England and Wales said: "Compelling parties to await judgment for an indefinitely extended period … weakened public confidence in the whole judicial process. Left unchecked it would be ultimately subversive of the rule of law."

Grotesque examples of this subversion of the rule of law abound in our region. Zimbabwe's Supreme Court upheld on the day it was argued (June 25 2009) a claim regarding the detention and torture of a human rights activist, Jestina Mukoko. The case was presided over by Chief Justice Godfrey Chidyausiku. The defence advanced on behalf of the attorney general collapsed under probing questions by one judge, Wilson Sandura. Hence the immediate order. But the court has yet to bring itself to give its reasons, finding (as it must, given the order) abduction and torture by state functionaries.

In Namibia, Sebatane v Mutumba entailed a challenge to the constitutionality of a time-barring provision that required litigants to institute claims against provincial and local authorities within 90 days. Judge Shivute reserved judgment on March 18 2003. On October 4 2012, Shivute (now chief justice) returned to the high court to deliver judgment. He held that a 90-day limit on a lay litigant was entirely reasonable. The irony of his taking nine years to say so appears to have been lost on the court.

Obvious failures
In Minister of Basic Education, Sport and Culture v Vivier NO, (2012), also in Namibia, the court took four years and two months to confirm in its material parts a judgment for damages initially heard in the high court from February 2005, with judgment delivered on September 30 2007. The claimant had sued on behalf of a mentally disabled girl raped by a teacher.

In another case, Tlhoro v Minister of Home Affairs (2008), it took eight years for judgment to be delivered.

These obvious failures of justice impelled the Namibian Law Reform and Development Commission to present for discussion a Judicial Oversight Bill in October 2012, attaching a draft code of judicial conduct based on the 2002 Bangalore Principles of Judicial Conduct. It proposes a 90-day limit in civil cases and a 60-day limit in any appeal, subject to an extension on application by the judge to the Judicial Service Commission. Fines may be imposed on delinquent judges.

Precisely because the limits of judicial power cannot be left to individual, discretionary determination, we need to formulate a judicial code of ethics for South Africa.

Harms has played a leading role in this project, which draws on the comparative work of Italian jurist Mauro Cappelleti and United Nations, Australian, Canadian, European Union, German and United States guidelines.

There is some debate as to whether it was Aristophanes or Archilochus who left us the adage: "The fox knows many things, but the hedgehog knows one big thing." Perhaps the biggest thing now to be known is that the Constitution binds even – and especially – its enforcers.

Jeremy Gauntlett SC is a past ­president of the Cape Bar and chair of the general council of the Bar. He served part-time as a Lesotho appeal judge for 14 years

Busisiwe Mkhwebane discarded facts that were inconvenient to her when she investigated the CR17 campaign, Cyril Ramaphosa’s lawyers argued
Read more
Politics

So says public protector Busisiwe Mkwhebane’s lawyer, who said she had reason to suspect the money was being laundered through the campaign
Read more
Thought Leader

COMMENT: Opposition candidates and party can increase their chances of success at the polls by putting aside minor differences and presenting a united front
Read more
National