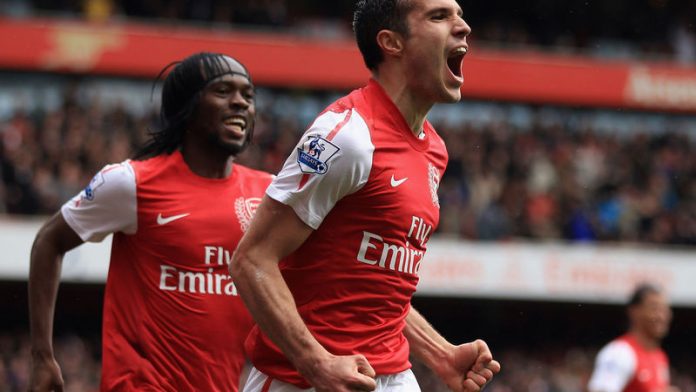 Releasing the latest set of strong half-year results on Monday, Arsenal demonstrated the financial benefits of resisting demands to recklessly recruit players – even though it is facing an eighth straight year without a trophy.

The American-owned club disclosed its cash reserves had risen year-on-year to £123.4-million, and that it made a net profit of £14.9-million in the six months to November 30 2012.

The regular profits are largely due to the annual departure of top talent, with £42.5-million generated in the 2012 offseason transfer window by selling players – much to the annoyance of fans frustrated by the failure to reinvest significantly.

It was the decision in August to sell striker Robin van Persie to one of Arsenal's biggest rivals, Manchester United, that infuriated so many Gunners fans.

The anger has only intensified as Van Persie's goals have helped United surge 12 points clear at the top of the Premier League, while Arsenal is 21 points adrift in fifth place.

Having been dumped out of the FA Cup and League Cup by lower-league opposition, Arsenal's title hopes now rest on overturning a 3-1 deficit at Bayern Munich next month to reach the Champions League quarterfinals.

Spending sprees
Even in the face of widespread fan discontent, chairperson Peter Hill-Wood maintained Monday that the club wouldn't veer from its strategy and embark on spending sprees in the hope of winning a first trophy since the 2005 FA Cup.

"Our ability to compete at the top of the game here and in Europe is underpinned by our financial performance, which gives the club strength and independence," Hill-Wood said.

"Our desire is to make everyone connected with Arsenal proud of the club.

"We know that comes through winning trophies but also through the way we do things, and that will remain our constant guide.

"That ethos has enabled Arsenal, which is owned by US sports tycoon Stan Kroenke, to take a leading role in Europe and the Premier League in driving through cost-control regulations to ensure clubs are self-sustaining.

"The board remains fully committed to this path and the rest of the football world is increasingly realising the strength of this model," Hill-Wood said.

" Kroenke has previously insisted that the profit isn't being generated to enable him to draw a dividend from the club.

The Arsenal Supporters' Trust responded to the half-year financial results by repeating its call for "better investment in the team.

"Arsenal, however, said £40.9 million was invested in the six months to November 30 in adding players to the squad such as Santi Cazorla and extending various contracts, including Jack Wilshere and Theo Walcott.

The supporters' trust has concerns that even if there was heavy spending the right executives are not in place to ensure it is invested wisely.

"The football decisions made on player investment, player selection and player wage levels are not delivering a more competitive team," AST board member Tim Payton said.

"The AST believes the club are financially well set to improve on the decline of the last few seasons.

"The remaining question is whether it has the boardroom leadership and football decision making expertise to make the money count.

" Some fans have questioned the August 2011 investment by manager Arsene Wenger in Andre Santos and Per Mertesacker, who have both failed to strengthen the fragile defense.

The money available for transfers could be reduced if Arsenal fails to qualify in May for the Champions League for a 16th successive season.

Arsene Wenger's side is currently outside of the four places for European club football's premier competition.

And the latest financial results showed that turnover from football activity had dropped 7% year-on-year to £106.1-million. – Sapa-AP