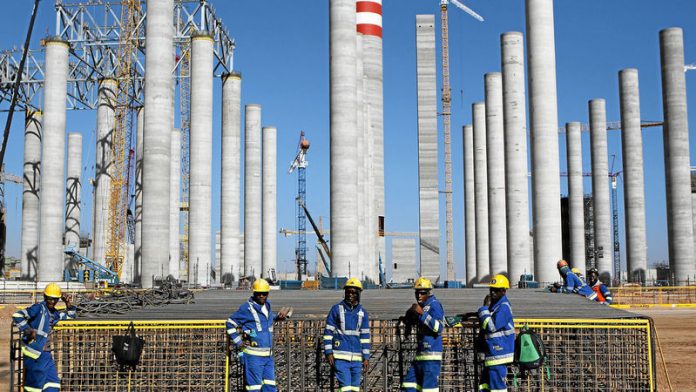 Labour productivity is among the challenges South Africa will need to address during its preparations to roll out its ambitious programme to produce 9 600MW of new nuclear power.

This emerged at a nuclear forum held after the Africa Energy Indaba, which took place in Johannesburg from February 21 to 23.

It would cost roughly the same to import the manpower needed from Europe, where wages are higher but so is productivity, as it would be to employ local workers whose wages are lower, as is their productivity, according to Yves Guenon, the managing director of Areva, a French nuclear energy company.

This is important considering that it is one of the most extensive infrastructure projects being proposed by the state.

Eskom, which the state named as owner and operator for the proposed nuclear programme, is being hampered by labour strife at the construction site of the new Medupi coal-fired power station. Strikes are threatening the delivery time of Medupi, which was expected to bring its first unit online later this year.

Guenon also expressed misgivings about the government's ambitious localisation plans for the nuclear programme. It would be very difficult to meet high localisation levels, if government opted to build one nuclear plant given the stringent certification and regulatory requirements vendors, suppliers and other companies involved in the nuclear industry were required to meet; as well as the need for qualified labour, particularly technicians and artisans.

But if the state followed through on its plans for a fleet of new power stations, localisation could be ramped up during the various phases of the programme, he said.

It was also critical that the workers employed during the building programme should be able to be moved from one construction site to another, both to retain and improve their skills as the nuclear project progressed.

"It's what we are doing everywhere in the world: engineers, technicians, welders — the good ones — are going from country to country."

He warned that very high localisation targets were "nonsense". Not even countries such as France, where Areva is based, had been able to localise fully, achieving levels of closer to between 65% and 70%, he said.

The proposed localisation was further complicated by the government's insistence on meeting broad-based black economic empowerment (BBBEE) requirements. Only 10% of local companies audited by Areva qualified for nuclear activity and even fewer were fully BBBEE compliant, said Guenon.

It would be doubly challenging to localise and comply with empowerment requirements. It could be done, he said, but not all at the same time. But the state remains adamant that, given the scale of the nuclear programme, the procurement deal must incorporate significant localisation.

It is estimated that the procurement and construction of the six new power stations envisaged will cost between R400-billion and R1-trillion. The department of energy wants localisation to amount to at least 50% of the programme to ensure that sustainable jobs are created and industrialisation is promoted.

But other participants rubbished Guenon's argument that localisation could not be easily achieved.

Marcus Gschwari of Letsema Consulting said localisation could take place despite the challenges, which included the country's low capability in component and equipment manufacturing — brought about by a lack of demand in recent decades, the extremely high levels of compliance, regulation and certification for components and equipment in the nuclear industry, and the strain that the high capital costs would place on South Africa's balance of payments. An effective localisation programme could mitigate these strains, Gschwari said.

Concern for policymakers
​Fleet procurement would better enable localisation and South Africa's current nuclear capabilities could be expanded, he said, including the research and development and isotope production capacity of the Nuclear Energy Corporation of South Africa and the operations at the Koeberg nuclear power station.

But the very high capital costs of nuclear procurement is a concern for policymakers. The national planning commission has called for the nuclear programme to be reviewed to ensure its financial feasibility.

But, Guenon said, the matter could be addressed in several ways, including with the use of export credit agencies, commercial loans and the involvement of strategic partners. Strategic partners could include intensive energy users who could invest in a project to secure cheap electricity for the life of the plant. He referred to a plant being built in Flamanville in France, where energy intensive users had put up about €3-billion to secure electricity at a fixed price for several years.

Commercial banks, which are playing a significant role in financing the country's renewable energy procurement programme, are also a possible source of funding for the nuclear programme.

The treasury had already approached the sector to understand the type of liquidity available and the market and risk appetite for nuclear financing.

The sooner questions such as broad based black economic empowerment were designed into the nuclear procurement plan the more certainty could be introduced into the programme, Mosiah said.

Standard Bank had examined various possible models to fund nuclear procurement, all with different implications for the supply chain and localisation options.

The capacity of the state and Eskom to negotiate the type of contracts that enabled more local content was an important factor, Mosiah said.

But key to the success of a nuclear programme, particularly one that ensured successful localisation, was the issue of affordability. The minister of finance would not sign off on something that the country's balance sheet could not sustain, he said.

Last week’s tremor has anti-nuclear campaigners questioning the safety of Koeberg, although the nuclear facility said the plant is designed to sustain a magnitude-seven earthquake
Read more
Opinion