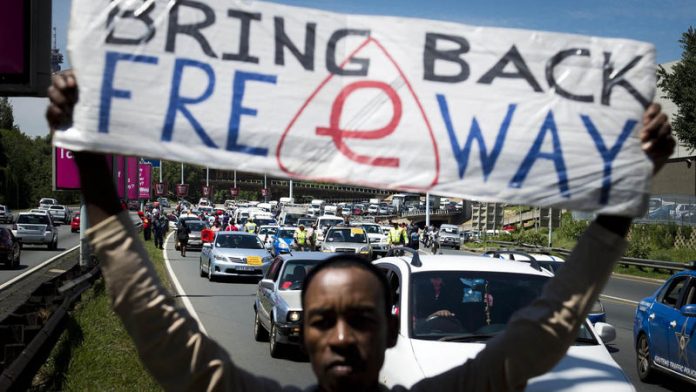 Introducing debate on the Transport Laws and Related Matters Amendment Bill, Transport Minister Ben Martins said on Tuesday that the Bill was essential to enable "the appropriate implementation of the e-tolling system".

These measures were required to implement the Gauteng Freeway Improvement Project and to facilitate provision of public transport and other projects in Gauteng, he said.

He rejected calls for e-tolling to be scrapped, saying the non-collection of tolls might impact negatively on the ability of the South African National Roads Agency Limited (Sanral) to raise capital for infrastructure development projects.

Inability to collect revenue would also damage the credit reputation of Sanral among investors, and could negatively affect Sanral and government's international ratings, Martins said.

No to e-tolling, say DA
The bill was strongly opposed by most opposition parties, with the Democratic Alliance's (DA) Ian Ollis calling it "the world's most expensive toll collection system".

According to the DA's calculations, it could cost up to R11-billion over eight years to operate.

"We must not assume that what is affordable in so-called 'Western countries' is affordable in South Africa. Open-road tolling is mostly used in Western, urban and first world environments … If an individual earns R6 000 a month and drives a second-hand car to work, that individual could be required to pay an extra R550 a month for toll fees. That’s a big chunk out of your salary," Ollis said.

The DA has called for a referendum to be held which will include Gauteng voters in the decision-making process.

"We therefore call on [Gauteng] Premier [Nomvula ] Mokonyane in conjunction with the IEC [Independent Electoral Commision] and this government to hold a referendum in Gauteng on the e-toll in April or May, prior to the implementation of the Bill," Ollis said.

There were many more efficient funding models available, such as a fuel levy of 10 to 14 cents a litre, which would cover all the costs of the Gauteng Freeway Improvement Project, he said.

Virulent opposition
The measure was approved by 193 votes to 98 in a division. There were two abstentions. The Bill now goes to the National Council of Provinces for concurrence.

Opposition to e-tolling has been widespread and virulent, with the Congress of South African Trade Unions organising extensive protest action and urging motorists not to register with Sanral or buy e-tags.

An application by the Opposition to Urban Tolling Alliance (Outa) to scrap e-tolling was dismissed in December by the High Court in Pretoria.

The court granted Outa leave on January 25 to take the matter to the Supreme Court of Appeal in Bloemfontein. A date for the appeals court hearing has yet to be set. – Sapa