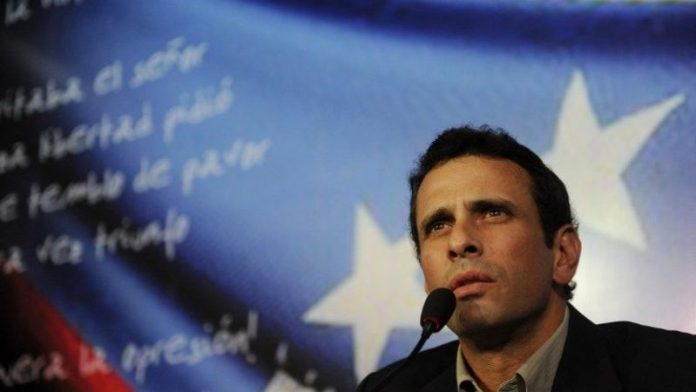 His campaign is a no-holds-barred attack against a government he accused of coldly betraying Venezuela' trust.

Chávez's political heirs have toyed with Venezuela' hopes, lying to them about his deteriorating health by suggesting he could recover and even producing decrees he supposedly signed, said Capriles, whom Chávez defeated by a 12-point margin in October.

He did not make direct reference to the decision to embalm Chávez and put him on permanent display, but he said: "You are playing politics with the president's body."

Capriles accused the socialist government that Chávez left behind after 14 years in power of meticulously planning a campaign to assure the election of Nicolas Maduro, Chávez's desired successor.

"Who knows when President Chávez [really] died," he asked.

The government says Chávez succumbed to cancer on Tuesday after a nearly two-year battle. It has offered almost no clinical information. Capriles also called Defence Minister Diego Molero a "disgrace" for publicly backing Maduro. The Constitution forbids the military from taking political sides.

Insults
A picture of Chávez behind him, Maduro appeared almost immediately afterward on state TV, accusing "the losing, miserable candidate" of defaming Chávez and his family. He called Capriles a "fascist" trying to provoke violence by insulting the "crystalline, pure image of Commander Chávez".

"You have made the biggest mistake of your life," Maduro said.

He said that if Chávez's family seeks legal action "don't say afterward that you are being politically persecuted." Capriles, a state governor, acknowledged facing long odds against a candidate who wields vast public resources and a state media machine -and has the backing of the country's electoral council.

"As one person said today, 'Capriles, they are taking you to a slaughterhouse. Are you going to be lowered into its meat grinder?'" he said. Capriles said, however, that he felt there was no other choice. "How am I not going to fight?" he said. "How are we not going to fight? This is not Capriles' fight. This is everybody's fight."

In some upper-class districts of the capital, people launched fireworks, shouted and honked horns as Capriles announced he would run. Political analysts wondered where the Capriles they witnessed on Sunday were during last year's campaign.

Capriles laid out potential major themes for his campaign, bemoaning violent crime, persistent poverty and a troubled economy that led the government to devalue the currency last month by more than 30%.

The electoral council has set the vote for April 14. Formal campaigning begins just 12 days earlier.Unlike Capriles, Maduro made repeated references to the possibility of violence in the superheated, abbreviated campaign ahead. Yet he also called for calm.

Opposition
​"We have to continue to rise above every provocation with peace, peace, peace and peace," Maduro said. "Respect, respect, respect." Opposition critics say Maduro's swearing-in Friday as acting president was unconstitutional.

The charter designates the National Assembly interim head of state if a president-elect cannot be sworn in. Capriles decided to run fully aware that a second presidential defeat could end his political career.

Political consultant Oswaldo Ramirez, who is advising the Capriles campaign, said the candidate must strike a balance between criticizing the failures of Chávez's government and Maduro's role in it, without being seen as attacking the late president.

"He can't speak badly of Chávez, because this feeling on the street is still in full bloom," Ramirez said.

Public opinion was as divided as always Sunday in a country that became dramatically more polarized during Chávez's 14-year rule. "It's not fair," said Jose Mendez, a 54-year-old businessman of the choice the opposition leader faces.

"[Maduro] has an advantage, because of everything they have done since Chávez's death, all the sentiment they've created … But the guy has nothing. He can't hold a candle to Chávez."

But Ramon Romero said the opposition was just making excuses, and has no chance of victory in any case.

"Now their odds are even worse," said the 64-year-old waiter and staunch Chávez supporter. "They don't care about anyone, and we [the voters] have been lifted out of darkness." – Sapa-AP