How meat hops through SA hoops 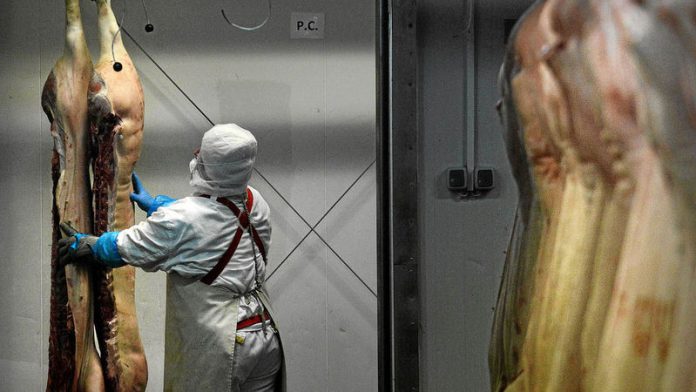 Millions of rands worth of horsemeat enters the country each year and, although customs controls are fairly stringent, where it ends up is anyone's guess.

Horsemeat imports, under the tariff heading "Meat of horses, asses, mules or hinnies [the sterile hybrid offspring of a male horse and a female donkey or ass], fresh, chilled or frozen" in 2012 amounted to 200 000kg, with an import value of R4-million. The countries of origin are listed as Brazil and Canada.

But given the unit price of these imports — about R20 a kilogram — "these are more likely to be trimmings rather than steaks," said Georg Southey of Merlog Foods, a wholesaler and importer of frozen food products. The meat would likely go into the production of foods such as sausages, he said.

Under the tariff heading, "Edible offal of bovine animals, swine, sheep, goats, horses, asses, mules or hinnies, fresh, chilled or frozen: Other, fresh or chilled", imports last year amounted to 4.89-million kilograms with an import value of more than R53-million.

The shock over mislabelling began in the United Kingdom (see "Fancy a bit of water buffalo in your burger?")

Southey said 99% of the time the mislabelling is not the importers' fault, but happens after the product is sold on.

"We've always found the [customs] controls to be very strict and really quite good," said David Wolpert, chief executive of the Association of Meat Importers and Exporters. He said the problem was not with imports, but rather with the processing of meat and subsequent mislabelling and misrepresentation.

Lengthy process
If one wants to import meat of any kind, there is a lengthy process to be followed. The state veterinarian, based in the department of agriculture, forestry and fisheries, must issue a health certificate or a permit for the product before the meat may enter the country. The state veterinarian is also responsible for knowing where the meat has come from and must inspect the production facilities and plants in the meat's countries of origin.

Wolpert said he was aware that horsemeat was entering the country, but did not know where it was going.

"As far as I know, none of our members are importing it, but I know the vets are issuing permits for it. "Kangaroo does come into the country on a monthly basis, but I wouldn't know who imports it," he said.

According to statistics provided to Wolpert by the South African Revenue Service (Sars), kangaroo comes in each month from Australia or New Zealand. "Last year, there were imports of 706 tonnes — that's about 60 tonnes a month," he said. Kangaroo meat, he said, was not very expensive and the amount imported was low compared with other meat imports. Chicken imports, for example, totalled 239 000 tonnes over the past year.

Wolpert said water buffalo had been imported from India for a period of roughly six months — more than 18 months ago — but it was stopped when incidents of misrepresentation were discovered and the state vet withdrew all permits for the product.

No specific tariff
Loshnee Naidoo, senior manager of customs trade statistics and debt management at Sars, explained: "There are no specific tariff headings for water buffalo, kangaroo and donkey — they are all classified under the code 'other'."

However, Naidoo said, customs was obliged to hold all suspicious meat products on behalf of the agriculture department.

"The department … will inspect the cargo and if their requirements have been met then only will the cargo be released … they are the experts," she said.

South Africa itself exports a range of exotic meats. Products categorised as "edible offal of bovine animals, swine, sheep, goats, horses, asses, mules or hinnies, fresh, chilled or frozen: Other, fresh or chilled" leaves our borders for countries as far afield as Switzerland and the UK.

Last year, about 1 900kg of goat meat valued at about R127 650 was exported to several African countries.

The South African Boer goat is said to be widely recognised as the yardstick against which goat meat across the world is measured. Chevon (goat meat) demand exceeds supplies in most parts of the world, notably in the tropics and the subtropics, where 74% of the world's chevon is produced. Chevon contains 50% to 60% less fat than beef but has the same protein content.

Fancy a bit of water buffalo in your burger?
​The shock over food mislabelling began in Northern Ireland in the United Kingdom when the Food Safety Authority found that some burgers supplied to supermarkets ­contained horsemeat — some as much as 30%.

Then it was discovered that some lasagne meals stocked at major UK supermarkets contained 100% horsemeat. The scandal spread to countries such as France and Sweden, and even some in Asia, and products were pulled from shelves.

Then, last month, the department of animal sciences at the University of Stellenbosch released a study that found undeclared species in local processed meat.

Researchers tested 139 processed meat products from retail outlets and butcheries in South Africa, and found traces of undeclared species in 95 of 139 samples (68%). No horse, rabbit, goose, mallard or Muscovy duck was identified in the samples, but undeclared water ­buffalo, goat and donkey were.

The university study noted that "with the escalating prices of commercial meat commodities, the globalisation of food trade and the increased processing of meat into value-added products, the incidence of … adulteration and fraud has become more commonplace".

A separate study by the University of the Western Cape found that many packets of kudu biltong contained different species such as horse, giraffe, pork, beef and even kangaroo.

Cutting out meat and dairy and slashes your carbon footprint