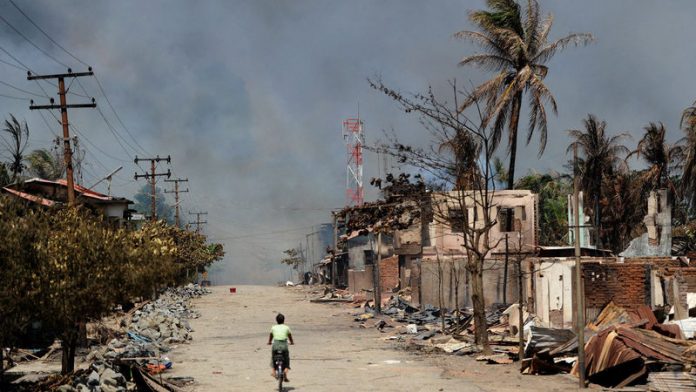 "Sixty-eight mobsters who were involved in the violence were arrested and action is being taken against them," the Ministry of Home Affairs said.

Clashes between Buddhists and Muslims were sparked by an argument in a gold shop in Meiktila, a town in Mandalay division where Muslims account for 30% of the population, an unusually high proportion in the mainly Buddhist country.

"The protest turned to anarchic violence and spread to other townships in other regions, and so far, 163 cases of violence have occurred in 15 townships, reaching casualty toll of 43 and leaving 86 injured," the ministry said.

It said 1 355 houses, shops and buildings were destroyed. More than 9 000 people were in temporary refuges.

On Tuesday, the riots spread to Bago, 80km north-east of Rangoon,, prompting authorities to impose dusk-to-dawn curfews in five townships.

President Thein Sein vowed to use force against further unrest.

In May, clashes between Buddhists and Rohingya-Muslims in the Rakhine State left at least 180 people dead and 125 000 homeless.  – Sapa-dpa

US, Myanmar to engage in talks over migrant crisis