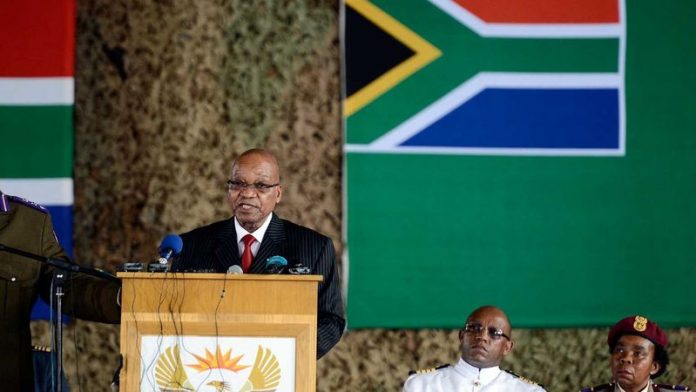 President Jacob Zuma spoke at the memorial service of 13 soldiers on Tuesday, who died in the Central African Republic (CAR) in March.

The presidency said the Mail & Guardian’s article, which read: “It was a speech thin on condolences but heavily laced with accusation and warning," was an attempt to not cover the tribute to the soldiers.

“The fact is that the president paid tribute to the soldiers and then stated government’s position on the deployment. The media has a responsibility to report on what he said, even if they disapprove of it, so that the public can be able to make their own judgment,” presidential spokesperson Mac Maharaj said in the statement.

Zuma said: "The tears of grief from the families are both inevitable and deserved, because of the calibre of men we have lost. To the families, your pain is shared by thousands of South Africans in many corners of the country and the continent.

"When future generations ask what kind of men and women these were, who gave so much of their lives to the service of the people of South Africa and the continent, we will be able to boldly say how special they were, to put their own lives at risk for such a noble mission of building peace in the continent."

The presidency said: “We urge media to report in a balanced fashion on this sensitive matter and not be used by various interests nor allow its own partisan positions to deprive its readers from the viewpoint of the president and government.”

M&G editor-in-chief Nic Dawes responded: “President Zuma chose to devote a considerable proportion of his remarks at the memorial service to a political attack on the press, and others who are demanding that he account fully for his decisions in relation to the CAR. Our reporting reflects that choice."

Damage
​
The ANC on Monday accused the M&G of damaging and malicious reporting, "calculated to damage the image of the ANC and to sow distrust in noble decisions of the South African government that derive from public and transparent policies". It said it was considering legal action.

The party also said the paper was "pissing on the graves of gallant fighters who put their lives on the line in service of our country and our continent".

"Given the seriousness of this accusation, we will consider all options at our disposal including approaching the courts of law for recourse and to honour those who are fallen whose sacrifice has been rubbished by the Mail & Guardian," the ANC said in a statement dated March 28.

That statement came in response to an article in Thursday's edition of the paper, which linked fixer Didier Pereira and his business projects in the Central African Republic (CAR) with the decision to deploy troops to that country.

"What is most disturbing with the accusation are blatant lies that suggest that a company linked to the ANC has business interest in CAR," the party said.

"We have established that the said company has no business activity in CAR. While their accusation is false, we believe that South Africans have a right to do business anywhere in the world including the continent of Africa."